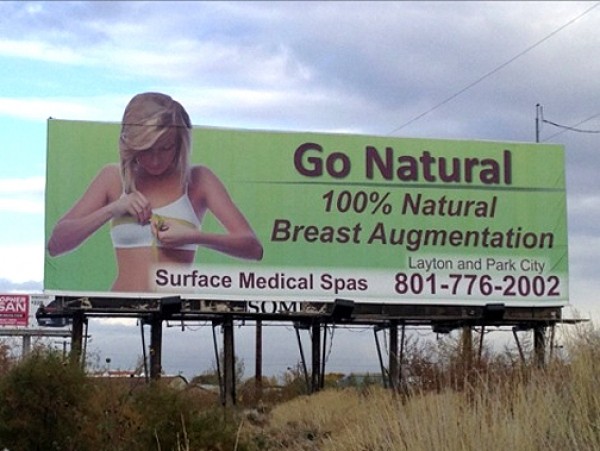 If you’ve found yourself curious about a procedure advertised on billboards as “natural breast augmentation,” the good news is that it’s an actual, well-established medical procedure. The bad news ... is hard to find.

The procedure, from a cosmetic standpoint and when done properly, seems like a win-win: Fat is liposuctioned from one area of the body and then implanted into the breast as a natural enhancement.

The procedure has recently come to Utah, with Surface Medical Spas, based in Layton and Park City, touting natural breast augmentation on billboards and, at one time, stating on its website that fat transfer to the breast “has had no major side effects ever reported.”

But doctors disagree. The transfer of fat from one part of the body to another sometimes requires multiple procedures over time, as grafted fat can simply dissolve. More concerning for doctors and physicians, however, is the fact that when transferred, some fat can undergo necrosis—essentially dying in the graft before calcifying and hardening. And during a breast examination, the hardened lump can easily be misdiagnosed as breast cancer.

Surface Medical Spas has paid for billboards along Interstate 15 advertising the procedure. The company’s website, Surface-Med.com, states that “Fat transfer to the breast started about twenty five (25) years ago and has had no major side effects ever reported” and that “to date, there has never been a fatality from this form of liposuction reported anywhere in the world in the past 20 years.” A separate page that also explains their breast-augmentation procedure says does not include the “no major side effects” line. *

Dr. Jayant Agarwal, an associate professor of surgery at the plastic-surgery division of the University of Utah School of Medicine, says that though the procedure is now a cosmetic option, it’s traditionally been used for breast reconstruction for women who had undergone mastectomies, but complications arise even then.


“The potential problems it could create is that it’s difficult with imaging,” Agarwal says. “The fat that we remove when it’s liposuction no longer has a blood supply when we wash it and put it into a syringe. In order for it to live, it has to have little blood vessels grow into it, but until that time, there’s a risk of infection because it’s just a foreign body for a period of time.”

If the transferred fat doesn’t grow—or “revasculate”—the vessels, then “those areas of fat will die, and you get oily cysts; you get hardened areas of scar tissues and calcification because the fat has died,” Agarwal says.

These hardened lumps aren’t dangerous on their own, but they can increase the chance that when a woman is screened for breast cancer, the lumps will be mistaken for being carcinogenic and require a biopsy.

In seeking to understand the procedure, City Weekly also called the clinic and asked a customer-service staffer about side effects.

The staffer initially mentioned usual post-surgical issues such as soreness, discomfort and itchiness. It wasn’t until City Weekly asked specifically about the cancer-screening concern that the staffer said that was a problem, but that it’s “very, very rare.”

Agarwal says it can be more of a common problem, but he also believes that improvements in screening in the future will make it easier, through MRIs and ultrasounds, to discern dead fat from cancerous lumps, eventually making it less likely women will need to get unnecessary biopsies.

Barson says that he’s aware of the problem in general, but he’s never heard of it being a problem with one of his clients. He says that all complications and concerns are explained to patients in detail before they sign a consent form.

And despite these complications, Barson says, fat itself is not dangerous.

“Fat is not cancer; there’s nothing really nefarious about fat,” he says.

Agerwal says that there are other side effects that women should take into consideration. Liposuction presents its own host of complications, he says, and since fat transferred to the breast is fat, and not an implant, it can easily dissolve, requiring repeat procedures that make natural breast augmentation much more costly than traditional breast enhancements.

Barson, however, argues that depending on how one views it, the procedure is more economical because it also includes liposuction.

“It’s kind of like a two-for-one,” Barson says. “The [patient] gets the bonus of getting fat removed from an area they possibly don’t like.”

Agarwal says he is indifferent about the procedure and simply recommends caution.

“Right now, just like any time we introduce some new technology or some new technique, you have to do it with caution,” Agarwal says. “Because all the people involved from family doctors and radiologist to the patients—they don’t know what to expect.”Â

*Editor's Note: This story has been updated from the print edition, which incorrectly stated that Surface Medical Spa's website had been changed after City Weekly contacted the clinic.