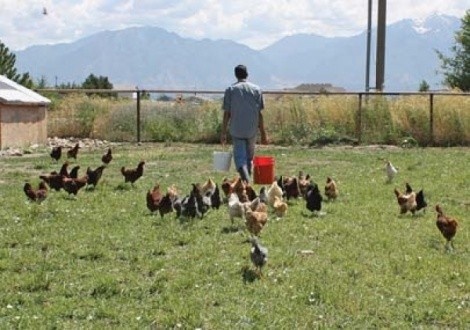 When cyclist Alberto Contador tested positive for steroids during the 2010 Tour de France, he was banned for a year. But when he blamed the test results on a steak he’d eaten, his excuse was found valid, and his ban was overturned. In June, five players on Mexico’s national soccer team shocked fans after testing positive for steroids. They claimed the steroids came from “contaminated meat.” The Mexican soccer federation found the claims accurate; the players were cleared. Mexican president Felipe Calderon admitted that such contamination is a problem in Mexico.

That’s why the next big food trend is “natural”—that is, undrugged—meat. But is it actually healthier, especially for athletes?

Beth Wolfgram, sports dietician for the University of Utah athletic department, makes a pertinent point: “What the animal eats ends up in our bodies, there’s no way it doesn’t. But this is a very controversial topic. … There’s not a lot of conclusive research about whether natural meat is more nutritious or healthier.”

The new trend matches ever-increasing consumer demands for organic vegetables, despite their higher price. Wolfgram says that more thorough research is needed about the nutrition and the impact of organic produce and undrugged meat.

Still, the trend is growing. Harmons is the first grocery chain to adopt it. Chris Smith, the meat and seafood sales director for all 14 Harmons stores, says, “The chicken, beef and pork at our service counter is all natural. It’s meat from the ‘never-ever’ program; it’s never been given hormones or antibiotics. The bin beef is ‘withdrawal’ beef, which means that it hasn’t been given any antibiotics or hormones during the past 90 days of its life.” Smith says word of mouth about Harmons’ “natural” meat is spreading fast.

The top local example of natural meat production is the Utah Natural Meat farm in West Jordan. The chickens are free range, the pigs have plenty of room and cattle are grass-fed and graze in a pasture. None of the animals are ever given hormones or antibiotics.

The animals are also humanely treated. “We don’t cut our chickens’ beaks off, or our pigs’ tails,” says Kristen Bowler, who farms with her husband, Shayn. “Commercially, pigs are raised in such close quarters that they are bored to death, so they bite off the tails of the pigs in front of them. Commercial chickens are raised in a warehouse, in cages about a foot square. They peck themselves, so factory farms cut off their beaks.”

“Factory” farms raise livestock like they’re vegetables, packed together with no chance to move around. Their blood circulation never gets pumped up because they don’t move in a normal manner. Is this meat as healthy for consumers as that from animals allowed to roam on an open farm? Shayn says, “[Commercial] meat can be compared to you sitting in an easy chair your entire life. How healthy would your body be? That’s the kind of meat people are eating.”

Another aspect of factory-farmed meat: manure. Chickens and pigs stand on wire grating; their waste drops below them where it collects into toxic pools. The fumes are constantly inhaled. Because the manure is contaminated with drugs fed to the animals, it can’t be composted and reused.

The Utah Natural Meat farm, which uses its animals’ manure to fertilize its pastures, totals nearly 1,400 acres, broken up into parcels owned by other members of the family in Mt. Pleasant, Erda and St. George. The West Jordan parcel is 10 acres, owned by Shayn Bowler, who comes from a farming family; his parents and grandparents were all farmers.

The extra effort of farming natural meat makes it more expensive. A dozen eggs costs $4, beef roast or hamburger is $5 a pound and pork chops are $5.50 a pound. “We have a lot of athletes that buy our meat because it’s very high in protein and low in fat. We don’t put anything into the meat, alive or dead,” Kristen Bowler says.

She adds, “Buying from a small local farm is a great way to buy meat. People can come to our farm and see how the animals are raised. That’s a big part of it for us; we want customers to see how we raise our animals, see what we feed them, see how they live.”

Get Out Get Out ,