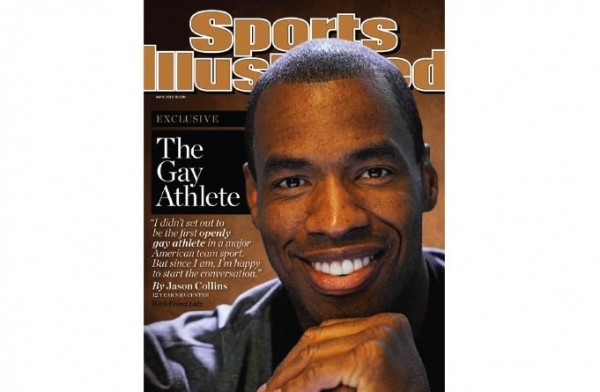 “I think everybody should embrace what he did ... I’m speaking on behalf of Karl Anthony Malone.” —Karl Malone in a CNN interview commenting on NBA player Jason Collins revealing he is gay.

It’s hard to think of higher praise you could get from the greatest Jazzman of all time than what the Mailman said about Jason Collins, after Collins became the first active, openly gay player in any of the four major American sports leagues. Karl Malone refers to Karl Malone in the third person all the time, but to throw in the middle name “Anthony”? That’s only reserved for historic occasions. Karl Anthony Malone, a nearly 50-year-old truck driver from the Deep South with a birthday on Pioneer Day who, in 1991, wondered out loud if it was safe to be on the court at the same time as HIV-positive Magic Johnson—that Karl Anthony Malone—is an avid supporter of an openly gay NBA player.

Part of Malone’s acceptance may come from the fact that he has a gay brother-in-law, or that he was teammates on the Jazz with John Amaechi, who came out after he retired, as well as Jason Collins’ twin brother, Jarron, who spent nearly a decade in Utah. But now that the NBA has its first openly gay NBA player, and there are others likely on the way, it raises the question: Are Utah fans ready to cheer for a Jazzman whose green, purple and gold jersey sports just three colors of the rainbow flag he’s flying?

The NBA and the Jazz shouldn’t have to worry about the Mormons who make up a significant portion of the Utah fan base. Well, at least not the good Mormons. Those who truly follow LDS Church teachings will cheer for any player who’s playing his guts out, gay or straight, because while their church is opposed to same-sex marriage, it nonetheless teaches that gays and lesbians deserve to be treated with dignity and respect. The LDS Church even backed Salt Lake City legislation to address discrimination against the gay community in employment and housing. It’s one thing if Mormon Jazz fans don’t want Jason Collins to get married to another man, but if they don’t want him on the team because he’s gay, they need to have their temple recommend pulled.

Judging from the reaction of Salt Lake City’s mainstream sports media to Collins’ announcement, an openly gay Jazzman would face a mix of support and curmudgeonly acceptance. Some clearly understood the significance of what Collins did and expressed support; Jazz radio announcer David Locke and Salt Lake Tribune columnist Kurt Kragthorpe were both notably eloquent in their appraisal of what the moment meant.

However, there were plenty of others who, knowing that outright homophobia is no longer on the table in the public square, still found ways to express their discomfort, if not downright disdain. One commentator even went so far as to say that while a journeyman player like Collins might be gay, surely no superstars have ever been, or will ever be, into guys.

There was also the standard “Why are we making a big deal about this?” complaint. It’s a big deal because it’s never happened before—and, even in 2013, male professional athletes still regularly state they would not accept a gay player on their team. It happened as recently as the most recent Super Bowl—with a statement from a San Francisco player, no less—and Collins’ announcement was met with some NFL players tweeting their disapproval.

Another common refrain was, “I hope he doesn’t get a contract just because he’s gay.” After millions of gays and lesbians have been bullied in schools, discriminated against in the workplace, rejected by their families and, in some cases, even killed because of who they choose to love, we’re suddenly worried about the tragic injustice that would occur if a gay man with over a decade of experience in the league were to get the 12th-man spot on a roster so that the NBA can send the message that it wants to be inclusive?

And, of course, when all else fails, some sports talk-radio hosts fell back on the whole “Dudes don’t like to get naked in front of gay dudes” thing. Nevermind that Collins’ former teammates have all stated that he’s a great guy to have in the locker room and that they never felt uncomfortable around him. One show even did a whole play-by-play breakdown with a former NBA player about who can see whose package in the shower. Guys obsessing over guys checking out other guys: How gay is that?

Anyone who would refuse to cheer for a gay Jazzman, or anyone who obsesses over who sees whom in the locker room or who someone loves off the court needs to heed three words of advice from one Karl Anthony Malone: “Grow up, people.”