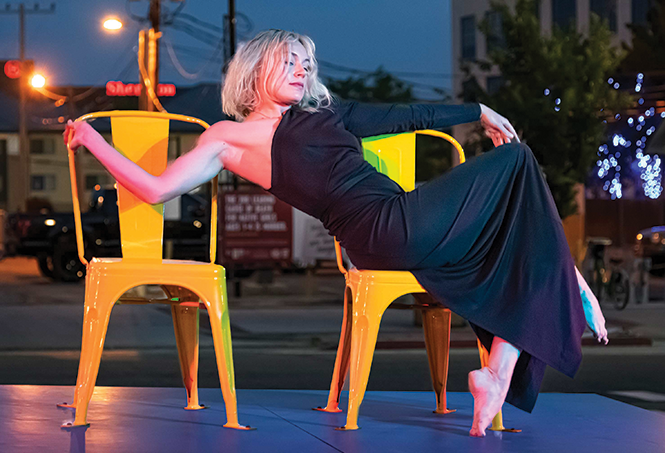 Stephen Brown has always taken an unconventional approach to constructing live performances. But there's "unconventional," and then there's having to turn everything you know about presenting a show upside-down.

The founder and artistic director of SB Dance, which has long pushed the envelope in terms of adult subject matter and provocative multimedia work, has responded to the coronavirus pandemic in much the same way restaurants and other retail establishments have had to re-invent their service-delivery model—by going curbside. In SB Dance's case, Curbside Theater Pickup means not inviting spectators into a theater space, but asking spectators to invite SB Dance into their space, and setting up a performance stage at private residences.

The journey towards this unique approach, as was the case for most performing arts organizations forced to reconsider their operations, began back in March with the growing realization that there would be serious upheaval. "I don't recall exactly the date, but there was a meeting at the Rose Wagner [Center] of all the resident [performing arts] groups," Brown recalls. "We were almost joking, 'Is the theater going to close?' The next week it was done: The theater's getting closed, the county is shutting down facilities.

"I was thinking, 'I don't even have a show planned until June, that'll probably be okay,'" Brown continues. "It was a going to be a collaboration with two friends of mine at the U. We'd been talking, planning ... I was in a coffee shop with them the day the U cancelled classes. [The realization] happened in dribbles."

As the shut-down continued into the spring, and it became clear to Brown that the disorganized response at various levels of government didn't make the prospect of getting back into theaters promising, he realized he had to start thinking creatively. "That's when I thought, 'We're not going back into a theater for a while, and it could be that audience behavior as far as going into a theater could be permanently altered, especially among older populations,'" Brown says. "I just started to think, 'You've got to get out of the theater.'"

So Brown began applying some of the ideas he's brought to previous performances outside of a conventional theater space, like SB Dance had done previously for events like Eat Drink SLC. "It's kind of in my wheelhouse," Brown says of putting on a minimalist, easily-transportable show. "I needed something pretty manageable and small. It had to be something I could build and figure out myself—get some plywood, some 2x4's, start nailing stuff together. ... You have to figure out the whole thing: Can it be generated off of a battery, can people see and hear, then you have social distancing."

The result is Curbside Theater Pickup, a performance of approximately 5 minutes consisting of dance solos or duos "with people who live in the same bubble," accompanied when possible by live music. Anyone can register at SBDance.com to request a performance on a select number of evenings currently through July 31, with performance times after dusk. Brown pulls in the stage on a trailer, setting up and breaking down each "production" in less than three minutes. The performances are offered free on a pay-what-you-can basis, with suggested donations also possible at the SB Dance website; the website also offers information on the space required to pull up the mobile stage, and for spectators to watch at a safe distance.

Brown emphasizes that the short duration of the performances is part of the intended dynamic of the work, both in terms of ensuring safety by not attracting a crowd, and by making it a special brief moment. "It's not meant as a destination thing," Brown says. "You can walk out onto your doorstep, watch something, then go back inside. ... There's a lot of magic in seeing something that's just ephemeral, was there for a second, this beautiful little gem that just landed in your neighborhood."

Brown says that while at press time there was only a single 5-minute solo piece ready for presentation, he plans to continue adding different pieces for as long as SB Dance is able to offer these performances, "not just playing one thing over and over, because that would bore the shit out of me." And while no creative people wanted the circumstances that exist to create such turmoil in the world of performance, he notes that being forced by those circumstances to come up with innovative ideas showcases a lot of what is amazing about the arts.