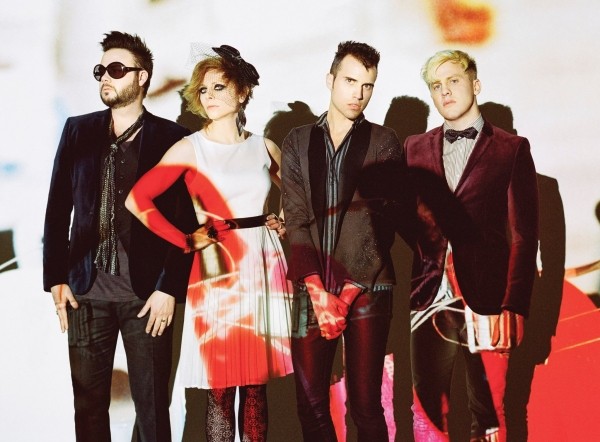 Frontman Tyler Glenn sings “Hey baby, won’t you look my way/ I can be your new addiction” on lead single “Everybody Talks,” and he could easily be talking about the Provo-based pop-rock powerhouse Neon Trees’ addictive new album, Picture Show (April 17, Mercury).

From the album’s opening staccato-ed, synthy keyboard strokes on “Moving in the Dark” to the bubble-gum-sticky hooks of “Everybody Talks” to the smooth reverb-ed ending notes of “I Am the DJ,” the follow-up to Habits (2010) is a glistening dance party of a disc. It’s free of format constraints yet welcomes the unabashed love of pop—handclaps and sing-alongs abound.

There was little down time for the band between the two releases. The hit single “Animal”—which meandered its way over 33 weeks to No. 1 on Billboard’s Alternative Rock Chart—was even performed on Glee around the same time Habits was released worldwide. That kept them busy, along with tons of worldwide touring; “Mad Love” is reminiscent of Duran Duran, with whom the band toured in 2011. The relentless jet-setting had them writing much of the material on the road—“Close to You,” for example, was written in Madrid, and finished in London.

“We didn’t want to disappear for a long time, because we didn’t want to take anything that we accomplished for granted. We’re not on easy street,” bassist Branden Campbell says. “What’s great is that we are not a household name, so it’s not like we’re so huge that we couldn’t evolve.”

But the electronica undertones will remind longtime Neon Trees fans in Utah of when the band was playing gigs wherever they could in 2006—a time when there were two keyboardists. Songs like “Trust,” “Close to You” and the club-y “Lessons in Love” have the electronic drums and heavy synth feel of those good ol’ days.

There are hints of Bloc Party, Ladytron, The Faint and Duran Duran throughout the record, and the “secret sauce” is the meticulous crafting of distinctly unique sounds, thanks in part to producer Justin Meldal-Johnsen (Beck, Nine Inch Nails, Air), whom Campbell met years ago at a conference in Los Angeles. “We didn’t even really talk to anyone else. There were some popular names that came up, and people that we would have loved to work with, but we knew we wanted [Meldal-Johnsen] because he’s worked with artists that are great at combining organic music with electronica,” Campbell says, adding that Meldal-Johnsen’s analog patch bay and some of the prototype keyboards they were allowed to use aided the album’s sound. “Some people might get bored in the studio, because it’s literally, sometimes, spending hours for the right sound—for a part that might even be a little counter-melody,” he says.

And on Picture Show, every note is in its right place.