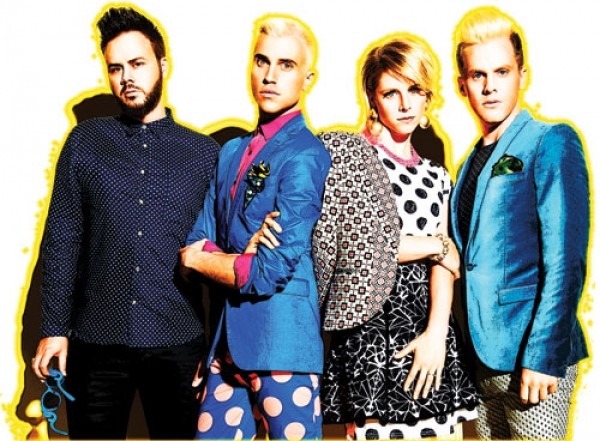 At Neon Trees’ sold-out June 16 show at The Complex in downtown Salt Lake City, frontman Tyler Glenn drew every eye to him, and not just because of his multiple costumes—although the ensemble of yellow suit, yellow-rimmed shades and tank top printed with Andy Warhol’s famous banana definitely helped. A veritable magnetic force, when he wasn’t displaying his Michael Jackson-influenced dance moves, conducting the audience as if they were a church choir or flashing a brilliant smile as he sang into the mic, he was disregarding the barrier separating the audience from the stage—jumping down to shake hands and, at one point, crowd surfing.

The show started with the crowd’s excitement level already at 10, and when the band launched into “Everybody Talks,” nearly every member of the audience began jumping up and down, cheering and screaming.

The most emotionally resonant moment of the night was much quieter, however, with the stage’s numerous multicolored lights turned off, and Tyler standing at the front of the stage under a white light, his back to complete darkness.

It seemed as personal for Glenn as if he’d come out to a group of friends, a moment during which he was affirming his identify with himself as much as he was with the crowd.

It was Neon Trees’ first show in Utah since 2012, well before Glenn publicly came out in March of this year. In the band’s dressing room before the show, Glenn said that just after he came out, he had “a little anxiety” about how his news would be received by Utah crowds. “Not that I cared; it wasn’t going to change whether I decided to announce it or not, but … I had that curiosity like, ‘Will there be people who decide not to come to the show?’ ” he said.

But Glenn had nothing to worry about. The applause that ensued was deafening, and continued as he wiped tears away.

Glenn and the rest of Neon Trees received nothing but support from their home crowd, and that affection was reciprocated by the Provo-based band. “There’s something you gotta do when you’re in a band,” Glenn said onstage. “You gotta stay true to your roots, ladies and gentlemen. … I love Utah.”

Neon Trees’ ongoing connection with Utah might be surprising to some, considering all four members are Utah transplants. But the Provo band is still intimately tied to its home scene and the artists in it. On their Facebook page under “hometown” and “current” location, it reads “PROVO UTAH,” in capital letters.

“I know Provo’s not the coolest town in the world, but … I’m stoked that we’ve continued to claim Provo, Utah, as the place,” Glenn said in an earlier phone conversation with City Weekly. “We could’ve easily said we were from California or Vegas or Chicago because we have members from those towns. But that’s just not the real deal.”

Until middle school, Glenn’s main musical inspiration was Michael Jackson. But in eighth grade, Glenn discovered the artist who would become his true idol: Morrissey, the influential vocalist of ’80s English rock band The Smiths. Through Morrissey’s love for the New York Dolls, Glenn became interested in them, too, as well as another early American punk band, The Dead Boys.

“Those are my two favorite bands,” he says. “Looking back at it now, I think it was because there was a lot of blurred androgyny that I thought was really interesting. Of course, I didn’t know at the time what that meant in my life.”

Once in high school, Glenn was invited to join his friends’ punk band, where he immediately found a much-needed cathartic outlet. “I had just gotten into some really old classic punk music, and so there was this really electric energy that I felt I could express in the music that I didn’t find in anything else,” he says.

In the April 2013 Neon Trees episode of the locally made BYUtv documentary-style show Audio-Files, Allen says that from the time they met, he knew Glenn’s musical abilities were extraordinary. “I gave him a tape of some songs I’d done on acoustic, and he took them home, and a couple hours later came back with four songs, completely done melodies, all the lyrics and everything, and I just knew he had something,” Allen says. “You just listen to him sing and you just want to pay attention. I knew something was there, and I knew we had to keep working together because we were both so passionate about it. I knew we would eventually make something happen.”

By his senior year, Glenn knew music was “what I’m doing with my life.” But Glenn and Allen had to put their plans to start a band together on hold when they served separate LDS missions, with Allen heading to Guatemala and Glenn going to Omaha, Neb. When Glenn returned to California, Allen was preparing to move to Utah to attend school at the Utah College of Massage Therapy. After Allen moved, he convinced Glenn to come to Utah as well, so Glenn abandoned his unsuccessful attempts at playing music solo since returning from his mission and followed him to Provo.

Setting the Scene
It’s not news that the Provo music scene is uniquely vibrant and connected to well-known area acts including Imagine Dragons, Fictionist, Brandon Flowers, The Used, Joshua James and, now, Neon Trees. And it’s impossible to tell the story of the origin of Neon Trees without also telling the story of Velour Live Music Gallery and its owner, Corey Fox. Formed nearly simultaneously, Velour and Neon Trees essentially grew up together, forging a longstanding relationship.