Strfkr's Josh Hodges never listens to his old music—except when he does. 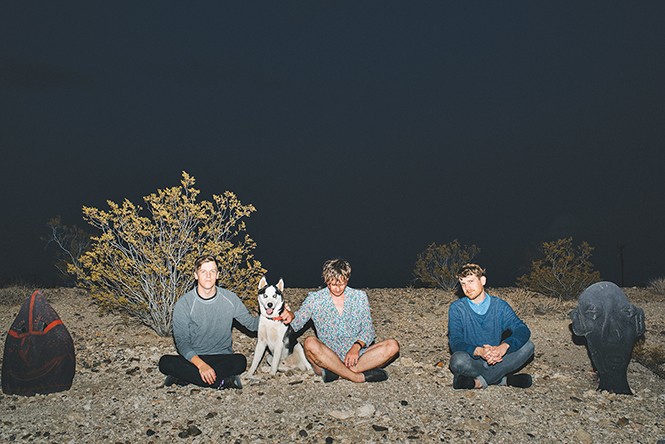 Josh Hodges, frontman for the indie-rock band Strfkr, doesn't like listening to his own music. When he hears one of his band's popular songs—such as "Rawnald Gregory Erickson the Second"—playing in a bar or department store, he cringes. It's not that he thinks they're bad songs; he's just finished with them.

"The enjoyment is in creating the thing," he says. "It's fun to make the song, but I'll never listen to it again unless I'm relearning a part to play it live."

In other words, Hodges makes music for the sake of the process. As the band's primary creator, he's responsible for the rich, intricate and densely layered arrangements that characterize the trio's sound, as well as their dark lyrical themes of death and mortality. The total package is generally poppy and danceable (see "While I'm Alive" off their last album, 2013's Miracle Mile).

Strfkr is a live-oriented band known for its energetic stage shows and elaborate homemade set designs and light displays. As such, Hodges wrote Strfkr's last full-length album—2016's Being No One, Going Nowhere—with live performances in mind, and believes he pulled it off OK. "I focused on the dance-y stuff, and I think it was successful; the beats were driving," he says. "Now we can have a longer dance block during our sets, because that's become what people expect when they come to our shows. And I also just love having a fun, reactive audience, you know?"

Even so, Hodges isn't entirely satisfied with how the record turned out: "There are definitely things I would change about the album, but I'm just like, 'I'll do something better on the next one.'" Despite being so self-critical, Hodges has been digging into the archives and releasing a bunch of unfinished songs. Vault Vol. 3 (Polyvinyl) is the final volume of the Vault series, which debuted last February and collects rare and previously unreleased recordings. The tracks are mostly fragments of ideas, some of which were later fleshed out with the help of bassist Shawn Glassford and drummer Keil Corcoran.

Hodges explains that he stumbled on about 80 demos stored on a wheezing, 15-year-old computer, and thought it would be a shame not to salvage the material. "It's fun to start a song, but it's difficult to finish it," he says. "I was never going to finish those songs, and the computer was going to die, so I figured I might as well put them out."

The collection offers an illuminating glimpse into the creative process of a prolific and eccentric songwriter. For Hodges, each song in the Vault series serves as a milepost, a reminder of his life circumstances at the time of the recording, and he considers releasing the collection kind of embarrassing. It's like putting his diary on an audiobook for everyone to hear. "But, you know, at this point, even if a just few people appreciate these songs, then it's worth whatever embarrassment I have over releasing unfinished shit," he says. "I just thought it would be interesting for fans because it shows my writing process or whatever, and I think some people like the raw, unfinished vibe."

As for future plans, Hodges is already writing the follow-up to Being No One, Going Nowhere, which might end up being released as a solo project. "It has an R&B vibe, and at one point I was like, 'This isn't right for Strfkr,'" he says. "Keil is an amazing drummer, but his style isn't very swingy, so I used a different drummer to record the songs, and now I've got, like, two albums' worth of sloppy, white-boy R&B."

Look for that project under a different name sometime this year, and also a revamped light show at Strfkr's live gigs. Hodges recruited some friends to design and construct a light wall—basically, programmable LED lights strung through transparent plastic material typically used to build greenhouses. "The panels can be moved around so you can set up different stage designs, and you can put GIFs on there and use it as a really, really low-resolution screen," he says. "It's so fun, but it's also kind of junky because we do it all ourselves." The band has big plans for touring this year, as well.

But Hodges seems to be warming up to the idea of revisiting his past work. He recently broke his own rule and listened to Strfkr's self-titled 2008 debut album. You might already intuit the reason, and it's an exciting one. The band is preparing to play it on tour, from start to finish, to celebrate a milestone: their 10-year anniversary. "It's been enough time that I feel like I was a different person then," Hodges says, "so I was able to listen without feeling so much ownership of it."

(A version of this story ran in the Jan. 18 issue of the Chico News & Review.)