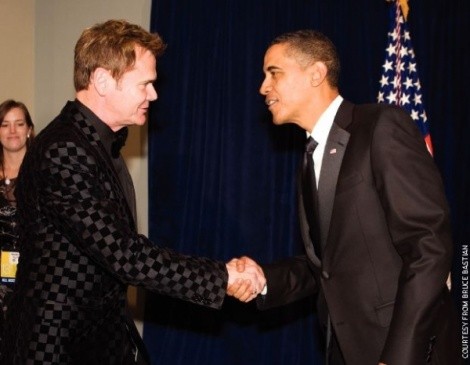 Orem-based philanthropist Bruce Bastian oversees the B.W. Bastian Foundation, which supports local and national initiatives from human rights to the arts. He was recently appointed by President Barack Obama to the President’s Advisory Committee on the Arts for the John F. Kennedy Center for the Performing Arts.

What’s it like to be appointed by President Obama?
I’m excited about it because I’ve always loved the arts, ever since I was a kid. I have a lot of respect for the Kennedy Center. I don’t think most Americans realize how their lives are touched by the many programs overseen there. It educates people of all ages about the arts, music and dance. What’s especially important to me is that it helps children.

The appointment has been an education to see how long these things take. You have interviews and interviews—it’s been five months, and I’m still going through a vetting process.

Are you known as a supporter of the arts?
Mostly, people think gay rights or HRC (Human Rights Campaign) when they hear my name. I don’t think they see the connection between me and the arts, which is partly the way life is. I’ll be remembered for what I am remembered for. The one big blessing is getting back an association with the arts. Wow, what an opportunity to throw myself into something new and what I love.

What do the arts do for people?
Unless you want to be unfeeling robots, we need something artistic in our lives. If you believe in spiritual nurturing, the arts touch the soul. I would challenge anyone that they would get more edification [from an artistic performance] than they get from a Jazz [basketball] game, where you either leave ecstatic or sad. What good is that, other than getting the heart going? Do the people who leave there leave as better people before they arrived? When you leave a museum, a play or a concert, you leave a better person.

A lot of good that comes from the arts. It teach people discipline, opens people to feeling. Artistic training builds your mind, making better scientists, better doctors. The arts is calming, it’s not competitive, it brings people together to create something that can be loved by everyone. I’m hopeful that I can at least raise some of those issues; this country needs to be reminded of those things.

What are you most proud of funding?
I’m very proud of helping the ballet through some difficult times. But, the thing I’m most proud of is the Steinway pianos at the U. It really helped lift up their whole piano department. I continue to get letters from the students for buying those pianos. That’s one thing I don’t regret at all.

What do you regret funding, then?
There might be some politicians I’ve donated money to that I wish I wouldn’t have. Nothing in the arts, though.

How did you initially get involved in the arts?
I grew up in a very musical family. I took piano lessons since I was six and played in junior high and high school band programs. My undergrad is a B.A. in Music Education. Music was kinda my life.

I then taught at BYU, until the music department fired me, because they said I didn’t have a PhD. They wanted someone that did and they didn’t offer a program. Then I said maybe I need to find something serious. I have to thank them for firing me, because looking back it was the best thing that happened to me.

What’s the state of the arts in Utah?
I think there is a very nice level of art appreciation in Salt Lake City and in Utah. But, it’s going down because it doesn’t make enough money and sports makes more money. I think from looking now and when I was a kid the arts are much less important, sadly so, I think business leaders and political leaders need to look at the bigger picture of the arts, not just bringing everything down to money. If you look at the well-rounded emotional health of the community, arts are very important. If you look at training children so they have other interests than gangs. Mindsets are becoming too short-sighted and narrow-minded, not looking across the board at the benefits of art and music to humanity.

You will be honored at the 43rd annual Humanitarian Award Dinner on March 18. What does that mean to you?
I’m honored that they think I should get it. Anytime you get an award that some other quite prominant individuals have received, it’s nice. I’ve tried to be very inclusive in my professional and personal life, trying to treat people with honor and dignity wherever they might be. That’s been my goal in life and that overflows into my fight for equality.

I don’t do things so that I get awards, but I’m glad to be considered something other than that crazy gay man.