Greta Gerwig restructures Little Women into a collision between aspirations and societal reality. 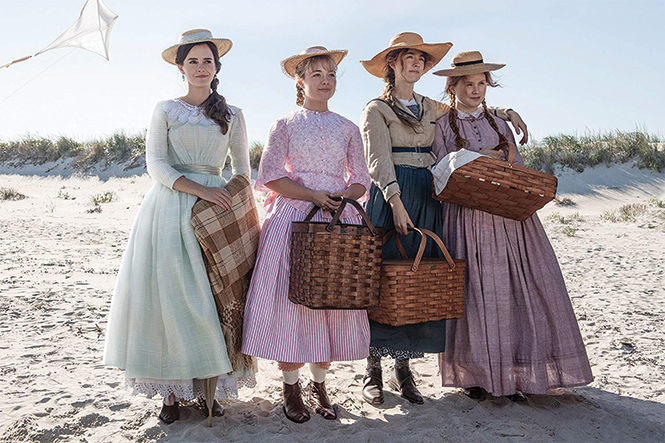 Every remake or re-telling of a story on screen comes with an implicit question: Why? What reason is there to do this again, and what new idea do the filmmakers bring to it? Sometimes the answer is obvious: There really isn't anything new to say, and the only reason is (ringing of cash register noise). But then there are occasions when it's clear that someone has been able to look at an existing story with new eyes. That's what Greta Gerwig has done with the 150-year-old text of Louisa May Alcott's Little Women: She has found a way of telling it that feels new and absolutely vital.

Most obviously, she radically re-imagines the structure. Gerwig's Little Women opens well past the mid-point of the novel, with Jo March (Saoirse Ronan) already living in New York and trying to build a career as a writer. From there, it ultimately flashes back seven years to the four March girls—Jo, Meg (Emma Watson), Amy (Florence Pugh) and Beth (Eliza Scanlen)—living in Massachusetts with their mother, Marmie (Laura Dern), while their father serves in the Union army. And for the rest of the running time, Gerwig shifts back and forth between the two time frames.

At first blush, that approach might seem to be a violation of a narrative that presents certain events as revelations. For example, we already know that Jo has rejected the marriage proposal of her neighbor and friend, Laurie (Timothée Chalamet), before Gerwig actually gives us the scene in which that rejection takes place. On one level, it could work simply as a tweaking of "spoiler" obsession: We're talking about a beloved novel that's been around for more than a century, including in previous film adaptations—and has even been a punch line for a Friends episode—so let's not pretend that we have to keep our cards close to the vest.

But there's more than that going on in Gerwig's fragmented chronology. As Little Women unfolds, it becomes a tale juxtaposing the lives that the young protagonists imagine possible for themselves with the choices that they ultimately have available. Meg dreams of escaping a family with constant worries about money, and has a wonderful experience at a fancy ball, then must shift her thinking when she falls in love with and marries a poor teacher; Amy talks of going off to Europe to become an artist, only to face what she perceives as her lack of exceptional talent. This interpretation of the story anchors itself in the collision between the aspirations a girl might have in 1860s America, and how to adapt when those aspirations seem impossible, or when they need to shift radically.

If any of that makes Little Women sound more like an earnest treatise than a satisfying film story, nothing could be further from the truth. The casting is top-notch, headed by Ronan's furiously spirited Jo and Pugh—a young actor who already seems to have limitless range—finding depth and pain in the usually bratty Amy. Alexandre Desplat's score provides a lovely backdrop, while Gerwig and cinematographer Yorick Le Saux find beautiful painterly images in candlelit interiors and the riot of colors in a New England fall landscape. It's also hard to imagine another director that would have turned the first meeting between Jo and Laurie into a gloriously goofy dance which, if perhaps more than a bit anachronistic, is nonetheless delightful to watch.

Little Women builds to a moment that makes it clear this is ultimately a story about its own creation, as Jo negotiates with a publisher (Tracy Letts) over the terms for her semi-autobiographical book. It's a bit obvious as a crowd-pleaser, bringing more than a hint of "you go, girl" to a tale that had mostly been frank in addressing the societal limitations placed on its female characters. Then again, this is the different point of view Gerwig has chosen to bring to Little Women, especially as a woman herself establishing a place in the male-dominated world of filmmaking. It's wonderful to see this source material as a call to recognize the unfairness the world might throw at you, stare it in the eye, and decide you're going to make your own happiness.