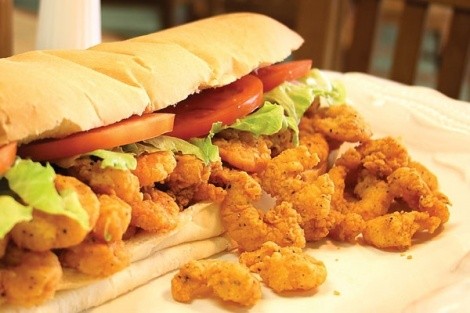 Soul Food Central
A couple of weeks ago, during the Salt Lake City Jazz Festival, I got a call from a cab driver who was driving some out-of-town musicians around. “Where can I take them for soul food?” he asked. “I’m desperate! I’ve got a car full of hungry jazz guys!” I was at a bit of a loss to answer him. Faces? The recently relocated Mama’s Plantation? Well, if he’d have called a day or two later I’d have had an answer: Renata and Darrell Braham have opened Spoony & Nata’s Down Home Café at 1810 S. Main Street. Spoony & Nata’s features authentic soul food and Cajun-Creole cooking with menu items such as gumbo, jambalaya, crawfish ettoufee, dirty rice, collard greens, po-boys, candied yams, red beans and rice, Southern-fried catfish and shrimp, corn bread, homemade sweet potato pie and traditional 7-Up cake. Prices are reasonable, ranging from $4.50 for sandwiches to $10.99 for some entrees. The hours are a little odd: 11:30 a.m.-6 p.m. Tuesday through Saturday and 1-3 p.m. on Sundays. For more information, phone 801-467-0400.


Burgers for Bikes
Through Aug. 21, the six local Salt Lake City and Provo Red Robin restaurants are hosting Burgers for Bikes, a fund-raising effort to benefit Catholic Community Services of Utah. Red Robin restaurants in the community will collect new and used bikes from guests to be distributed to families in need in the Salt Lake City area through Catholic Community Services of Utah. Guests who donate a bike will receive a coupon for a free Red Robin gourmet burger during their next visit. According to Red Robin, “The bikes donated to CCSU will support its mission of providing help and creating hope for thousands of people of all beliefs who are most in need in the community through Refugee Resettlement, Treatment Services and Basic Needs Services programs.” RedRobin.com

Quote of the week: Statistics show that of those who contract the habit of eating, very few survive. —Wallace Irwin