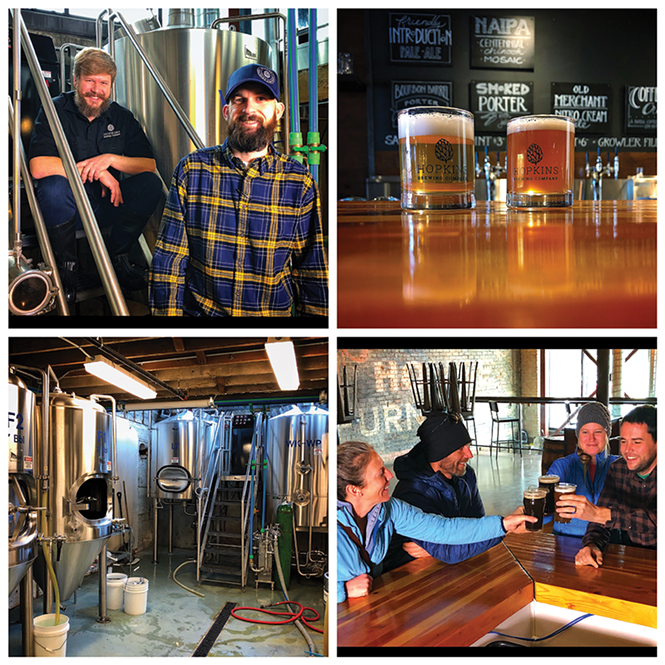 On the last day of 2018, Utah added one more brewery to its record-breaking list of debut beer joints. Hopkins Brewing Co. seemed to come out of nowhere, due to the efforts of some dedicated homebrewers and a little help from Epic Brewing Co. Epic has had some difficulty at its Sugar House location (formerly The Annex), but beer enthusiasts Chad Hopkins and Teddy Walton (picture, top left) approached the brewery's owners with a solution to their problem: The two entities would team up and create a brand-new brewery based on the hyper-local concept that's driving the craft beer industry right now. "We have no plan to distribute," head brewer and co-owner Hopkins explains; "we just want to stay small and serve the Sugar House community with fresh beer and rotating taps." I got the chance to try their new 4 percent suds, and here's what you can expect.

Hopkins Friendly Introduction Pale Ale: The beer pours a slightly hazy amber orange, with a creamy off-white foam head. It smells like grapefruit, mild orange citrus, some sweet malt and woody/floral grass; it tastes like grapefruit peel, sweet malt, and some spice, with floral pine and earthy grass. It's light-bodied and creamy with low carbonation. Overall, a nice and refreshing pale ale.

Hopkins NAIPA: It pours a dark honey-orange color with a foamy tan head. Aromas of biscuit, citrus fruit and floral tickle the nostrils. The taste is much the same, with biscuit, floral, citrus zest and pine needle flavors on the finish. There is a mild amount of bitterness on the palate with each sip. This beer has a lower level of carbonation with a slightly crisp mouthfeel. Overall, this is a pretty good beer with a solid mix of different hop qualities all around.

Hopkins Bourbon Barrel Porter: It pours a dark brown color with more than a finger of beige head. The nose has notes of roasted malt and cocoa, which are also present throughout the flavor profile, with whiskey notes becoming more apparent after it warms. The finish is bitter with slight lingering bourbon notes. Overall, a straight-up roasty porter with enough bourbon qualities to make it different.

Hopkins Smoked Porter with Jalapeño: The aroma is driven by a refined leathery roastiness; char, tobacco and chipotle bring clarity and roundness. The flavors follow the nose, with an added tickle from the chipotle creeping in. The smooth leatheriness from the chiles plays off the chocolate and malt of the base porter without dominating and finishes with a rather bitter roast character. Overall, the chile addition is great, with little heat.

Hopkins Old Merchant Nitro Cream Ale: It pours a hazy orange-yellow with two fingers of dense nitro foam and has very light aromas of lemon citrus and cracker malt. The taste is more assertive but still light, like most cream ales. Earthy malt with a light citrus hoppy character shows up in the finish, making it definitely more malty than hoppy. Overall, it's light bodied with high drinkability.

Hopkins Coffee Cream: Light in color, but then the smell of coffee hits you nicely; not overpowering, but not subtle either. The taste is where the subtlety of the coffee is, which is perfect, as I didn't want it to dominate. The La Barba coffee addition is very easy to drink; creating a nice representation of a coffee-infused cream ale. Overall, coffee fans will rejoice.

The seven-barrel brewhouse currently has beer flowing from all eight tap handles and a full kitchen with comforting pub fare for hungry patrons. You can find Hopkins Brewing at 1048 E. 2100 South in Sugar House, open 11 a.m. to midnight. Welcome to the Utah beer family and, as always, cheers!