All you need to ring in NYE in SLC

Music and parties for New Year's, oh my

Whether you’re looking for a rock show, some sexy jazz sounds or a classy night at the theater, Utah’s nightclubs and entertainment venues have a little something for everybody to help with your New Year’s Eve planning. For some of the events listed below, we weren’t able to find out the admission price. Contact the clubs with any questions, and just to be safe, you’ll want to bring plenty of cash for covers, cocktails and cabs. 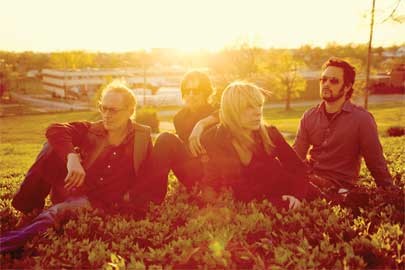 Heartless Bastards
With a bevy of DJ dance parties and local acts playing about town tonight, it’s nice to know that when the fellas at The State Room were booking this gig, they had in mind the rest of the party crowd—the ones who just want to hear some big ol’ rock & roll to blast away last year. What better band than the blues-rock outfit Heartless Bastards? Led by steel-piped lead singer Erika Wennerstrom, this scorching quartet is sure to light up the passage into the new year with two full sets. Heartless Bastards is currently taking a break from touring in anticipation of their energetic upcoming album Arrow, due Feb. 14. But they’re making a special jaunt back to SLC, where they have consistently sold out shows of late. The evening will be rounded out with grub from Este Pizza, raffle drawings and a Champagne toast at midnight. The State Room, 638 S. State, Salt Lake City, 9 p.m., $40, TheStateRoomSLC.com

Laserfang
One of the best live acts in town is continually oscillating between on-again and off-again (Sound like your New Year’s resolutions?). But they are most decidedly back on, and have been since Shane Asbridge moved back to town in October. This time last year, the band released their first album to rave reviews, and it still jams. Word is that they’re going to start working on the new material soon. Aside from busting out some new cuts in the first new hours of the New Year, this show should be one crazy dance party, filled with equal parts glitter, glam and sweat. Night Sweats will help set the night on fire with an opening set. The Urban Lounge, 241 S. 500 East, Salt Lake City, 9 p.m., $6, TheUrbanLoungeSLC.com

Little Big Town
The gorgeous four-part harmonies that this Alabama-originated country act puts together seem surreal in how articulate and perfectly balanced they are. With two lovely ladies and two gentlemen, who all take turns on lead vocals, their tunes are a fine showcase of Southern charm and debutante showiness. The band balances out Nashville styling with some pop-rock, as heard on their four albums released to date. Their latest, the 2010 album The Reason Why, peaked at Numero Uno on the Billboard Country Music Chart. With tunes like “Little White Church,” “Kiss Goodbye” and “The Reason Why,” it’s no surprise how. Eccles Center for the Performing Arts, 1750 Kearns Blvd., Park City, 8 p.m., $25-$150, EcclesCenter.org

Legends 2012
Here’s a party that is being advertised with this phrase: “It’s the dawn of a new time, a time of change.” I’m not quite sure, especially with the addition of implicit references to the Mayan calendar—and the end of the ancient civilization’s calendar—if that is a quality reason to just get plain bonkers on this holiday or not. Either way, the list of DJs at this annual event is always impressive. This year they have Feed Me—who is on the Mau5trap label—joined by Calvertron, Mark Yurm, Rokcity, Fu Ju and Dipsy, all of whom are expert in the art of bass dropping to make butts wiggle. Not enough? This DJ-induced event will have a state-of-the-art 3-D visual show to get folks’ minds off of the apocalypse and on to more engaging temporal things. The Complex, 536 W. 100 South, Salt Lake City, 7 p.m., $25-$35 in advance, $40 day of show, TheComplexSLC.com

Countdown Getdown
This New Year’s Eve bazaar is the brainchild of musician and Salt Lake City native Erin Barra. “What I’m trying to do is bring this great party atmosphere that I’ve been entrenched in in New York City. It’s a classy, grown-up type of rave,” she says. An ecstatic free-for-all, the event will be DJed by spinning stalwart Jesse Walker, and folks will get their dancing (and cheap drink) on. Dancers and partygoers will be surrounded by bliss: trapeze performers hanging from the walls, body-painted beauties prancing about, an art installation and more, all capstoned by a Champagne toast at midnight. Bar Deluxe, 666 S. State, Salt Lake City, 9 p.m., $20 in advance, $25 day of show, BarDeluxeSLC.com

An Affair to Remember
The Marriott University Park is creating a one-stop New Year’s Eve shop with everything you could possibly need or want in a year-end celebration. Six distinct venues will be set up within the hotel, including a martini bar with live jazz, a DJ and dance floor in another spot, live tunes from the G. Brown Quintet in yet another, a movie-theater gaming station and more. There will be food available throughout and a Champagne toast at midnight, too. Individual tickets are $45, and there are room packages for $154 and $214 that include late check-outs and a Bloody Mary Brunch for two. Marriott University Park, 480 Wakara Way, Salt Lake City, 801-581-1000, Marriott.com

The Game’s Afoot
West Valley City’s Hale Centre Theatre is ringing in the New Year with a brand-new show, the premiere of Ken Ludwig’s comedy-thriller The Game’s Afoot. The show begins at 10 p.m. for this special presentation, and just before midnight, a member of the audience will interrupt the action onstage to lead the audience in a midnight countdown and rousing round of “Auld Lang Syne.” Before the show starts, starting at 9:15, there will be music by the band Lokalgrown as well as food and drinks. Hale Centre Theatre, 3333 S. Decker Lake Drive, West Valley City, 9:15 p.m., $44, HaleCentreTheatre.org

A Roaring Twenties Celebration
Bar-X and The Red Door are teaming up for a classy New Year’s Eve party designed to take guests back in time. All are encouraged to wear clothes fitting for the Roaring Twenties, and both bars will have special, one-night-only cocktails on the menu, as well as some sexy, jazzy tunes courtesy of DJs and live performers. As a bonus, there will be free transportation between the two bars, so you can pay one cover charge and do a little bar-hopping at the same time. There will be a midnight Champagne toast at both joints. Bar-X, 155 E. 200 South; The Red Door, 57 W. 200 South, Salt Lake City, 7 p.m., $20