Behold 31 options for ringing in 2017 with a bang—from active to contemplative.

Take part in a mirror ball countdown. Instead of watching the New York ball drop through your television screen, visit the MirrorBall at the Salt Palace. Each piece of this ball was custom built by local artists and assembled by hand. In addition to seeing the nation's largest mirror ball drop to a light show, visitors are entertained by local DJs, drum performances and fire dancers all night. (KE) Salt Palace, 100 S. West Temple, 801-333-1133, 7:30 p.m.-midnight, $20-$25. EveSLC.com

Catch some epic fireworks. What better way to ring in the new year than with the boom of fireworks echoing off the mountains? Join in Snowbird's torchlight parade and firework show for a mountain getaway at one of Utah's most beloved ski resorts. (KE) Snowbird Center, 9385 S. Snowbird Center Drive, Snowbird, 801-933-2222, 6 p.m.-midnight, $165-$245. Snowbird.com

Funk it up. Get your New Year's celebrations started a day early with George Clinton and Parliament Funkadelic at The Depot. This band brings more than 40 years of experience to deliver an outlandish and memorable night. With an opening performance by local artist Talia Keys, the show promises a fun and funk-filled night. (KE) The Depot, 400 W. South Temple, 801-355-5522, 8:30 p.m.-12:30 a.m., $35-$40. DepotSLC.com

Party Like Old Blue Eyes. Ditch the loud, crowded streets and freezing cold to ring in the new year old-Las-Vegas-style. The Royal's Rat Pack New Year's Party has all the games, live music and great food and drinks to transport you to the Sin City of yesteryear. (KE) The Royal, 4760 S. 900 East, 801-590-9940, 5 p.m.-midnight, $20. TheRoyalSLC.com

Bust a move at the Great Saltair. The Saltair's final show of 2016 is jam-packed with artists and performances. Featuring the beats of Deorro with SLiiNK Riggi & Piros, the "Black & White New Year's Eve Party" promises a night full of nonstop party music in one of Utah's most unique music venues. Parking is $5 (cash only), and is not included with ticket purchase. (KE) Saltair, 12408 W. Saltair Drive, 801-250-6205, 7 p.m.-midnight, $35. TheSaltair.com

Ditch the top hat and wear a Stetson instead. When you get right down to it, most New Year's celebrations are essentially some variation of a dance party—not so with Broken Heart Rodeo's Bull Wars. This annual event brings bull-riding—the most exciting event of the rodeo—to liven up the final day of 2016. (KE) Golden Spike Event Center, 1000 N. 1200 West, Ogden, 801-399-8798, 7:30 p.m.-midnight, $6-$17. GoldenSpikeEventCenter.com

Laugh your worries away. Dwayne Perkins is here to offer a final laugh in a year full of truly bizarre and often disheartening news. Fueled by his global travels and his experience as a black man, his comedy dissects America's role in the world. He's been featured on The Tonight Show and Letterman, and has a Netflix special called Take Note. (KE) Wiseguys, 194 S. 400 West, 801-532-5233, 9:30 p.m., $15. WiseGuysComedy.com

Golf ... Skip the congested bar scene and reserve a bay at Topgolf. You and your group can enjoy a more relaxing transition into 2017, hitting balls into giant, glowing holes in the ground while getting your buzz on at the all-inclusive bar. Don't sleep on the extensive list of appetizers. The Topgolf New Year's Eve package includes party favors and unlimited golfing. (MS) Topgolf, 920 Jordan River Blvd., Midvale, 801-208-2600, 9 p.m.-1 a.m., $225-$450. Topgolf.com

... or bike. What better way to say goodbye to 2016 than kick-starting your New Year's resolution to get in shape? Each year, bicyclists brave the elements in a downhill event called Frosty's Fat Bike Race. Participants hurtle down the mountainside on fat-tire bikes. Awards are given out to top finishers, but everyone's a winner with the swag gifts, barbecue following the race and a cross-country course. (MS) Nordic Valley Ski Resort, 3567 Nordic Valley Way, Eden, 801-745-3511, 8 a.m.-1 p.m., $35-$75. FrostyTheFatBike.com

Celebrate the other 12, noon. Hey, we get it. You want to be the responsible parent and get your kids to bed at a reasonable hour, but you also want the youngsters to get in on the New Year's Eve fun, too. Live Daybreak Community Center covers the bases with their event, Noon Year's Eve. For just $3, you and your kiddo are in store for a morning full of games, crafts, music, goodies and a balloon drop right at the stroke of noon. Best part? No one stays up past their bedtime. (MS) Live Daybreak Community Center, 4544 W. Harvest Moon Drive, South Jordan, 801-253-6418, 10:30 a.m.-noon, free. LiveDaybreak.com

The Natural History Museum of Utah also celebrates the last noon with their very own Noon Year's Eve event. The super sleek exterior of the new museum is appealing, but it's the ancient artifacts and collections inside that leave visitors in awe. Aside from opening the exhibitions on New Year's Eve, the museum is offering hands-on activities, music and a confetti blast at midday. (MS) 301 Wakara Way, Salt Lake City, 801-581-6927, 11 a.m.-2 p.m., $7.95-$12.95. NHMU.Utah.edu

The Living Planet Aquarium in Draper is fun for the family year-round, but if you haven't made it to the giant fish tank in 2016 yet, you can only procrastinate until Dec. 31 at their Noon Year's Eve event. The aquarium is kicking off the new year with a balloon drop, face painting, photos and, of course, open exhibits. (MS) 12033 S. Lone Peak Parkway, Draper, 801-355-3474, 11 a.m.-2 p.m., free with admission. TheLivingPlanet.com

Gaze into the future. If you knew beforehand what 2016 had in store for you, would you have taken the same actions? Perhaps you would've gotten out of that toxic relationship a little sooner, or maybe everyone would've taken Donald Trump and his small hands a bit more seriously. The past year was a bitch to us all, so take zero chances and get a psychic reading at Crone's Hollow to find out what to expect in 2017. The store offers group sessions in palm reading, oracle cards, energy healing, crystal ball reading and other forms of divination so you can do the new year right this time. (MS) 3834 S. Main, Salt Lake City, 801-906-0470, 9 p.m.-1 a.m., $40.CronesHollow.com 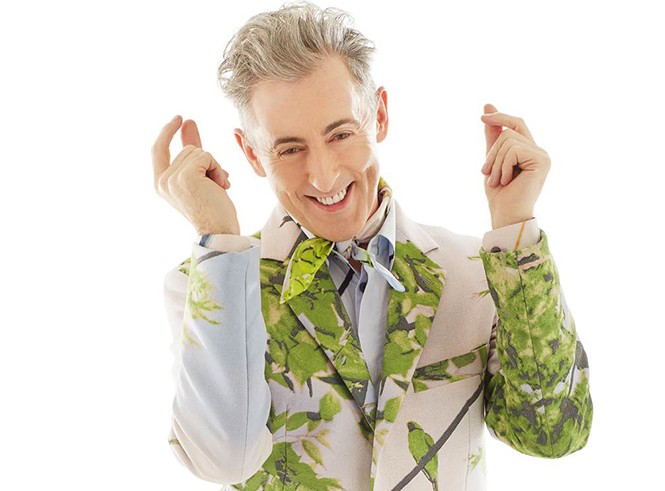 Burn your woes away. Out with the old, in with the new. That's what New Year's Eve is all about, right? Say goodbye to stagnant and negative thoughts that inhibit your happiness at the sixth annual Burning Bowl Ceremony. The Satya Center for Spiritual Living and the Congregational United Church of Christ hosts the bowl-burning event, a tradition in which they seek to help people let go of the past and create new goals and intentions for 2017. (MS) 3350 Harrison Blvd., Ogden, 801-920-0560, 6 p.m.-7 p.m., free but donations accepted. TheSatyaCenter.org

Lighten up. Get an early start on those resolutions—or at least free up some calories before a night of partying—at Fuze Fitness' Open House in the morning of New Year's Eve. The free classes run the gamut in all levels of physical fitness, so don't feel bad if you're carrying an extra few pounds from the holidays. Choose from black light Zumba (don't forget to wear white), a weightlifting class, a stretching/yoga class and more. (MS) 9854 S. 700 East, Sandy, 208-283-9181, 9 a.m.-noon, free but RSVP required. FuzeFitness.com

Party in Provo. The city's Countdown to 2017 celebrates the new year with a series of events, including this massive party at the recreation center featuring dozens of activities. Laser tag, archery, hypnotists, a game room, karaoke, a gadget room, a magic show, paddle boats, casino games, face painting and live comedy from the cast of Studio C are just some of the activities scheduled. That's a hefty evening for $10.(GS) Provo Recreation Center, 320 W. 500 North, Provo, 7 p.m.-midnight, kids 3-17 $8, adults $10, ProvoCityEvents.com

Get in touch with your inner diva. If you dig celebrity impressions, the Viva La Diva-NYE Diamond Celebration show is for you. City Weekly and Five Wives Vodka sponsor this star-studded event with impersonators of Lady Gaga, Pink, Marilyn Monroe, Dolly Parton, Bette Midler, Cher and more. Harry-It Winston prepares the menu, and a full mixologist bar is on hand to keep the party fueled until 1 a.m. (GS) Club X, 445 S. 400 West, 801-935-4267, 7:30 p.m.-1 a.m., $35, 21+. ClubXSLC.com

Catch up-and-coming musical acts. It wouldn't be New Year's Eve without music, and Kilby Court is happy to give you a show before you run off to find fireworks. Kicking off at 7 p.m., the all-ages venue throws an all-locals "pre-bash" bash featuring the rock band Lady Teeth (in one of their final shows before they take a hiatus), punk rockers Spooky Snack, "sensitive" rock band GABI and the garage rock trio Rich Girlz. (GS) Kilby Court, 741 S. Kilby Court, 7 p.m., $6, all-ages. KilbyCourt.com

Disco skate! Feel like getting off to a rolling start on 2017, while grooving like you're in 1977? Orem's Classic Fun Center brings in the new year with a family-friendly New Year's Eve Disco Skate Party, complete with midnight countdown and balloon drop (with balloons filled with cash and prizes). Feather that hair and break out the polyester. (SR) 250 S. State, Orem, 801-224-4197, 9 p.m.-12:30 a.m., $10 or $5 online pre-sale. ClassicFunCenterOrem.com

Solve a murder. Get ready for the countdown by turning your final dinner of 2016 into a chance to test your powers of deduction. The Dinner Detective Murder Mystery includes a four-course plated dinner for all participants, in an interactive show that gives guests a chance to figure out whodunit. (SR) Embassy Suites, 3524 S. Market St., West Valley City, 801-968-4760, 6 p.m.-9:30 p.m., $54.95. TheDinnerDetective.com/Salt-Lake-City

Party in the valley. Never let it be said that Utah County doesn't know how to party; they just do it in their own special way. Uprising Events offers the grand entertainment of the Utah Valley New Year's 2017, with DJs Marcus Wing and Justin Reid laying down the beats in two different themed dance areas. When you feel like taking a break from dancing, enjoy the rock-climbing wall, inflatables, food truck offerings and special giveaways. Dress to impress. (SR) UCCU Center, 800 W. University Parkway, Orem, 801-863-6175, 8 p.m.-12:10 a.m., $20.99-$35.99. UprisingEvents.com

Do the Charleston. Have you ever imagined yourself celebrating like all the Roaring '20s bon-vivants you read about in books? Dust off your spats or don your finest flapper attire for Summit Lounge's "Great Gatsby New Year's Eve." DJ Cloud 9 provides the music for the 1920s-themed evening, with chances to win prizes including cash and a night's stay in Wendover. (SR) 918 Heritage Park Blvd., Layton, 801-773-8784, 7:35 p.m.-1 a.m., $3. Facebook.com/SummitLounge

Visit the Doctor. What's the passage of a single year when you're a Time Lord? Fire up the Tardis and join in the fun at the Doctor Who New Year's Costume Party. Come for the banquet dinner or just the dance, putting on your finest themed costume for prizes, games and general merriment. (SR) White Willow Reception Center, 342 N. 500 West, Provo, 8 p.m.-1 a.m., $35-$99. ChefAnthonyNewYears.Eventbrite.com

Help out those in need. Maybe what you need in order to get 2017 off on the right foot is the feeling that you're making a difference to make next year a better one. Volunteers are needed for the 23rd annual New Year's Dinner and Party for the Homeless at the Salt Lake City Mission for set-up, check-in, food preparation, clean-up and many other tasks. If you're not able to make it in person, make a financial gift online. (SR) Christian Life Center, 1055 N. Redwood Road, Jan. 1, 7 a.m.-7 p.m., SaltLakeCityMission.org

Just stay home. Let's face it: 2016 knocked us all on our ass. It's OK to relax, gather your strength and greet 2017 with unabashed energy. You're gonna need.