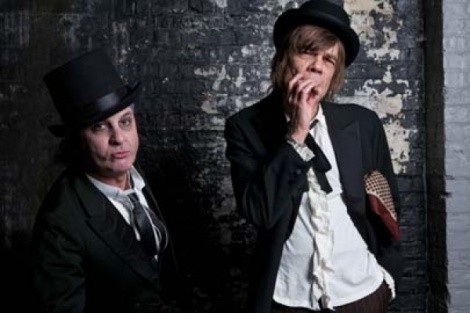 “We have a little bit of a Salt Lake connection,” says Sylvain Sylvain.

That’s easy to figure out if you’ve seen the 2005 film New York Doll. Although the subject of the documentary, the New York Dolls’ late bass player Arthur “Killer” Kane, was an L.A. Mormon, that’s enough of a link—call it a spiritual one.

“That movie,” the redundantly designated guitarist continues, “is such a beautiful movie. And it’s not just about a [rock star and his religion]; it’s a life story that should be seen by everyone.”

It’s touching that Sylvain wants to talk about his friend before plugging the new Dolls album or the band’s upcoming Utah appearance. So many bands are obsessed with their new joints, especially reunited bands like the Dolls, an influential group whose devotees—such as the West Valley show’s top-billed acts Poison and Motley Crue—made their multi-million-dollar names on the glam-rock pioneers’ cake-faced look and trashy sound.

Here in the SLC, it’s real good for hair-metal bands. Poison rolls through every summer, guaranteed. The Crue hits us virtually every time they tour. They do brisk business here because mousse-metal’s hold is virtually intact even after its early-’90s hangover. So it’s nice to see the bands bringing out their musical forefathers so they can, er, get some.

See, the Dolls originally lasted a lean five years and two albums before falling apart in 1976. They made the most of that time, as the presciently titled second album Too Much Too Soon seemed to imply. But their accomplishments, like the pile of classic tracks—“Personality Crisis,” “Babylon,” “Jet Boy”—and their eye-shadowed and cocked-hip attitude template gained more appreciation in retrospect.

Not that they’re concerned with that. Sylvain already killed that notion talking about Kane. City Weekly had asked him to tell stories to rival those in the legendary Motley biography The Dirt, just to juxtapose the bands’ respective brands of debauchery. Sylvain balked.

That, in itself, is rebellious, if you think about it. After all these years, even if they weren’t focused on self-promotion, you’d think the New York Dolls would jump to assert their glam-rock dominance and brag just a little. Sylvain never did get around to plugging the band’s third post-reunion album, Dancing Backward in High Heels. But he expressed regret over a canceled Salt Lake City show a couple of years ago. “For some reason, the promoter canceled … to our disappointment—to me and David, especially. And we were so close, comin’ from either Denver or Wyoming.”

Don’t assume that the Dolls have become domesticated and impotent in their second go-around. This writer thought that might be true when the band played Rachael Ray’s party at South by Southwest in 2009. It seemed an odd pairing, to say the least, but the Dolls crushed it. Singer David Johansen did Mick Jagger better than Mick himself, strutting and showing off his abs. The group sounded like they were back in 1973.

Later, Johansen showed there’s more than a flicker of offstage rock star left in him. When asked for an autograph, Johansen kept walking and said nothing—but his free arm, the one not linked to a leggy, fishnet-clad hottie, floated out and took the pen and paper, scribbling quickly without missing a cool, collected step.

It seemed that, for the Dolls, there’s a time and a place for certain behaviors. For them, it’s onstage and during backstage afterglow. For us, it’s June 19, at a venue on the outskirts of suburbia.