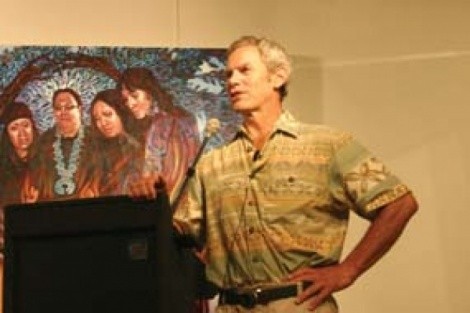 Facing the first semi-surprise of his administration, Salt Lake City Mayor Ralph Becker addressed a respectful but demanding crowd at his first “morning with the mayor” at a North Temple coffeehouse. A series of shootings had focused the spotlight and his audience’s attention on the west side.

The mayor lauded the rapid arrest of suspects in the drive-by shooting death of a 7-year-old girl and a general police roundup of suspected gang members that followed. But his audience wanted more than tough-on-crime statements.

“Before we lock kids up and call them ‘gangsters,’ we should level the playing field,” said Terry Hurst, co-owner of Mestizo Coffeehouse. “Whenever we fail to invest in community, we are going to have a problem with crime.”

Hurst was one of several who complained of crumbling sidewalks, lack of police response, abandoned buildings and a general perception the city ignores west-side neighborhoods.

Becker says he hasn’t talked about the “west side” because he doesn’t like to divide the city rhetorically. But he says the area has been on his mind from the beginning of his 6-month-old administration. He picked restoring the Fisher Mansion on the Jordan River as his first public building project for just that reason.

Salt Lake City’s mayor recently celebrated six months in office by extolling achievements of his 180-day “action plan.” Checked off Becker’s to-do list were items like hiring a city education czar and someone to oversee trail development—arguably important accomplishments, but nothing to merit the “great” of Becker’s “great American city” election pledge. For the next six months, however, it appears Becker is thinking bigger.

There will be more community meetings—summits on schools and discrimination—but the first-term mayor also is turning his attention to the Utah Legislature. Becker wants to convince conservative lawmakers they don’t have to love the capital city to recognize benefit in giving liberal Salt Lake City a hand up. He even hopes to convince them to help Salt Lake City build a big new theater.

First up is getting a little respect for Utah’s capital.

“I think Salt Lake City has been on the defensive and I don’t think we should be,” Becker told City Weekly. He contends Utah’s capital city is widely viewed as getting more than its fair share of resources, when the opposite is true: Lawmakers frequently fund pet projects for other cities while stiffing Salt Lake City. The result is bad for everyone, Becker says.

To prove it, Becker is assembling a report on Salt Lake City’s dollars-and-cents value to the state. He hopes to convince state leaders that, even if they disagree with the city’s registry for domestic partners, the state shoots itself in the foot by punishing Salt Lake City financially. Becker cites the battle during last year’s legislative session over building a TRAX extension to the airport.

“The whole state benefits from that probably more than any piece of the light-rail system, yet we just about had the rug pulled out from under us,” he said. “There isn’t an appreciation for what this city does for the rest of the state and the need for the state to be at least respectful of that.”

Becker’s pitch to lawmakers will be one of mutual tolerance. Let Salt Lake City be Salt Lake City, or as he told a recent meet-the-mayor event, “within state values … allow us as a city to do what our community wants.”

“We’ve had this political dynamic that the politics of Salt Lake City are different from much of the rest of the state,” Becker said. “I would accept that. … Maybe our politics are a little different than they are in St. George or Vernal, but it doesn’t mean that because of different politics in each city, we don’t all benefit from each city being enormously successful.”

Becker’s initiatives for the 2009 Legislature include asking for changes to state laws he says currently block some of his administration’s initiatives. Becker wouldn’t elaborate. Items on his to-do list include retirement benefits for unmarried partners of employees and a nondiscrimination ordinance.

Becker also wants state money to help build a downtown theater for Broadway touring shows. A recent study showed the cost would be around $80 million. The mayor suggested the city is assembling an arts proposal for the Legislature’s consideration that would encompass more than a downtown theater and have “direct benefit to the state.”

This time may be different. Scott Bond, Sandy assistant chief administrative officer, said Sandy isn’t currently looking for state help for its project of two theaters, hotels, condos and shops. “We’re not in a race for a theater,” he said.

And Becker, the former leader of Utah’s House Democrats, is used to being the underdog. “I spent 11 years in the minority,” Becker said. “Coming from Salt Lake City is just another variation on it.”