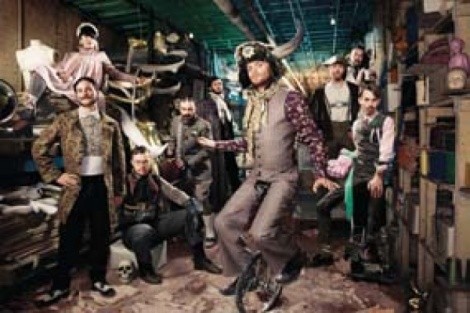 In 1995, then hairstylist-apprentice Matthew Landis took a road trip with young business wheeler-dealer Richard Surber to a rave in Idaho. The rave, at a Masonic temple, was organized by Surber’s then-boyfriend, Utah’s sweet-toothed prince of fashion, Jared Gold. That “pivotal night” as Landis calls it, he and Surber became friends. “That was the happiest summer of my life,” Landis says wistfully.

The enduring friendship among Surber, Landis and Gold resulted in one of Salt Lake City’s more unique business collaborations. Surber set up the publicly traded Nexia Holdings for his real estate interests in the early 1990s. Gold moved to Salt Lake City from Los Angeles five years ago. A series of highly successful runway events in Los Angeles funded by predatory financiers had left him broke.

Those friendships, however, did not stop the ventures from unraveling in the past two months. Surber fired Gold’s merchandising manager, tailors, designers and support staff at the beginning of March. Later that month, Surber closed the Black Chandelier stores in Murray’s Fashion Place Mall and Orem. He fired Landis on March 28 for attempting to “convert the Landis Lifestyle trademark,” and failing to “protect company assets,” Nexia stated in an SEC filing. Landis, however, says he made the decision to leave. “I didn’t think I was being compensated or being treated the way I should have been for what I’ve done,” he says.

Whatever the truth behind Landis’ departure, Gold is leaving under his own steam. On May 22, he will stage a runway event called “Czarina” in Salt Lake City, then leave for Los Angeles.

Which places a question mark over the future of Surber’s Nexia Holdings. With a market capitalization of just $140,000, and endless problems trying to raise equity to fund growth, it’s not surprising Surber is despondent. He’s even put Nexia up for sale. “The only worse thing than being broke is being broke with a public company,” he quotes a friend as saying. It’s the pressures and financial demands of a public company, it seems, that also helped drive Landis and Gold out of the door.

Landis paid $10,000 for 15 percent of his salon. According to Surber, the salon grossed $1.6 million last year, yet still posted a $60,000 loss. He blames poor management of expenses. But Landis says his salon “had to bear the brunt of Nexia businesses that weren’t doing well, like Black Chandelier. We were asked to do more faster to prop up some of these areas I had no control over.”

Landis has apparently landed on his feet. He’s opening a new venture, Matthew Landis Salon, in downtown’s Gallivan Center. That said, he’s still negotiating with Surber over the rights to his own name.

Unlike with Landis, Surber seems reluctant to see Gold depart. Two more shipments of Gold’s designs for Black Chandelier will arrive from India and China shortly. Gold says the designs promise Surber a lucrative summer. After that, it seems unlikely he will be designing for Black Chandelier anymore, although the store will carry his own Jared Gold label. He’s agreed to find a replacement and mentor him or her, albeit from Los Angeles.

Gold says he became increasingly embattled running Black Chandelier: “Too many cooks in that pot.” When Nexia brought in new management personnel, “It was catastrophic,” he adds. His concept of selling clothing with “a nonsexual vibe” to middle America, he says, is strong. The Nexia-propelled idea of opening four stores in a town the size of Salt Lake City, however, was not.

After Surber gutted his Black Chandelier staff without consulting him, Gold sought employment elsewhere. He’s currently developing a reality TV show in Los Angeles, but says he can’t discuss it.

Nevertheless, the bonds of Gold’s friendship with Surber don’t seem completely eroded. “I could have real easily done a midnight move out, but I didn’t want to leave Richard in the lurch,” he says.

Landis also says he bears no ill will to his old salon. He hopes it fares well. Shortly after he left, several unlicensed stylists at the Landis salon were suspended after a state inspection.

How well Black Chandelier will continue without Gold’s ongoing presence is uncertain. Gold’s future involvement, along with his employment contract, have yet to be negotiated. Gold says he’s offered Surber three contracts, but they couldn’t agree on terms. Last year, Black Chandelier grossed $1.2 million. Thanks in part to the cost-cutting the first quarter of this year, Surber says, Nexia will show a significant improvement on the same period in 2007. That said, Gold’s $250,000 of Nexia C-stock is, for now, worth very little.

“The reality is for the type of resources we have, we did a heck of a job, made a heck of a run for it,” Surber says. Not that he’s writing off a business that still employs 75 people. “I’ve got to make tough decisions or you run the risk of the entire thing failing,” he says. While they haven’t failed yet, “that’s not to say we don’t have our issues.” Those issues include getting current with some of Nexia’s creditors, retaining staff and raising additional capital.

As to whether the business will continue without his Los Angeles-bound friend’s future involvement, Surber holds out hope: “I wouldn’t say without Jared,” he says. “Not without Jared.”