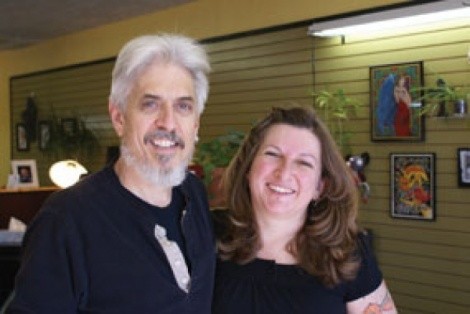 T stands for tattoo, and also trouble—with the law at least—when it comes to a clash between the Rev. Gregory Lowery’s combined Happy Valley Tattoo/Whole Life Ministries and the city of American Fork.

Lowery’s unorthodox gospel of ink and piercings, he believes, has drawn religious discrimination from city law enforcement, who might not consider the buzzing of tattoo guns to be as heavenly as the church bells of that old-time religion. City officials, however, say their investigations have nothing to do with beliefs and everything to do with protecting minors.

In May 2007, several underage boys used fake IDs to get tattoos from Happy Valley Tattoo. The receptionist was later fired, but owner and church founder Lowery believes charges weren’t really brought against him until he complained about treatment from a more recent investigation. That probe deals with minors who came into the shop several days after this past Christmas and saw explicit photos of genital piercings. One of the minors, a 14-year-old girl, told her father of seeing explicit images in a display binder at the store. The father complained and, on Jan. 3, the police investigated the parlor and confiscated a number of photos and other pieces of evidence.

Lowery says most of his shop’s photos of nude piercings are contained in a binder clearly marked ‘‘adult” but, in this case, a few images of pierced genitalia were featured in the public display binder. Besides, Lowery argues, those pictures had educational value—much like nude images one might see in a National Geographic magazine—and, therefore, aren’t illegal.

“When the officers showed up, they pretty much told us that if we didn’t like what they were doing that we could pack up and leave town,” Lowery says of the investigation. “I think our civil liberties have been violated,” Lowery says. “They [American Fork police] are conflicted because of their own religious beliefs.”

Lowery currently has enlisted the help of the Utah chapter of the American Civil Liberties Union, which as of press time hadn’t agreed to take on a discrimination case but is investigating the claims.

Lt. Darren Falslev, who’s leading the investigation, believes any notion of discrimination is unfounded. “The thing you have to remember here is the police didn’t initiate this,” Falslev says. “We got a complaint from a parent who called it in. As a police department, we are obligated to look into it.”

Lowery believes he is being harassed because his religious belief that celebrates tattooing clashes with those of the members of the LDS Church, who dominate his community.

“Tattooing and piercing reinforce your self-image,” Lowery says of his beliefs, “just like CTR rings and garments. But these are permanent and painful, so they have to be sincere, to express to other people their belief system. Any way you look at it, it’s a spiritual exercise. But the church in Utah considers it desecrating the flesh.”

Lowery started his ministry back in 1985 in Michigan. Back then, it was known as People for Peace. Lowery’s background then wasn’t in tattooing, but in a specialized “healing.” Lowery wouldn’t go into specifics of how the healing worked except to say that it scientifically re-creates the effect of an LDS priesthood blessing.

During this time he began developing a unique nondenominational faith that centered simply on Jesus’ Golden Rule of loving thy neighbor as thyself. “We teach people how to apply the Golden Rule in their lives, but we don’t tell people how or who to worship,” Lowery says. Lowery’s gospel of love and peace, he believes, has made a great impact in the world, including helping to end the Cold War. Lowery says he sent a letter outlining a plan for peace to former Soviet leader Mikhail Gorbachev. “After I sent the letter, Mikhail followed [the plan] to a T, and the Cold War was over.”

Since moving his ministry to Utah in the last 10 years, clients admit that while Lowery may be eccentric, his compassion for people and his work is very real.

“On a personal level, [Happy Valley Tattoo is] absolutely fantastic; they just make you feel like family,” says client Tracey Ford, of Provo. “Sure, they make me bleed, but during the tattooing, they’ll talk to you and just prompt such a warmth and connection with you. It’s just amazing.”

Lowery, who runs his business and ministry with wife Kita, has worked since the investigation to be more sensitive to the concerns of his neighbors. “We’ve now made it a policy that no minor can be in the store without a parent or guardian,” Lowery says. “We’re just trying to improve the industry for those who believe it’s a spiritual practice and for those who don’t.”

Following the police search of his shop earlier this month, Lowery was also served with a notice that he is illegally using his commercial business as a residence. On Lowery’s Website DocLoco.com, where he has been chronicling the alleged “harassment” in a series of posts entitled “Happy Valley Massacre,” he describes this latest zoning development as “the next attempt on behalf of the American Fork City government to chase a religion they don’t personally approve of (er … not Mormon) out of town.”

Police Lt. Falslev, however disagrees. “This is just a notice given that they have to apply for a variance [zoning permit] and come into compliance,” Falslev says of the Jan. 18 notice. “There’s no chance they’re going to be evicted.”

Falslev likewise points out that laws protecting minors are strict throughout Utah, so he disagrees with Lowery’s persecution argument. “I don’t see these people as different, I’ve always found them to be very nice and decent folks.”