News | Smells like 2000: Voting was supposed to have changed after the 2000 election fiasco. What happened? 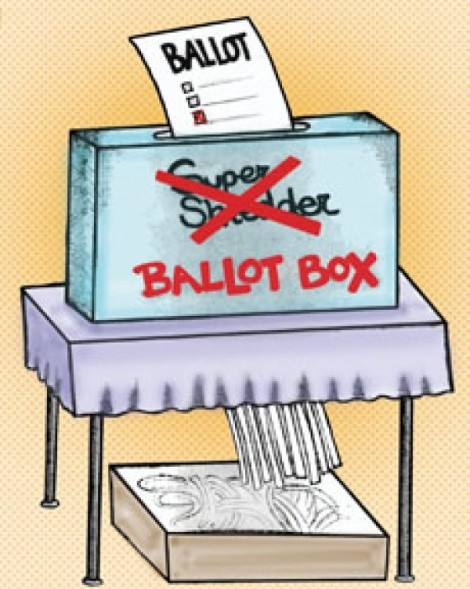 A massive right-to-vote law which passed in the wake of the famously bungled 2000 presidential election was supposed to end election shenanigans and complaints of uncounted votes. New national standards meant voter registries would be accurate and open to public inspection. New states’ rules meant no one would be turned away from the polls. Everybody would vote on new accurate voting equipment.

That was seven years ago. Today—less than one year before the second presidential election since passage of the Help America Vote Act—it seems the right to vote is still shaky in parts of Utah.

In Ogden, the American Civil Liberties Union of Utah is investigating allegations of widespread voter intimidation during November’s mayoral race. In Park City, voters complained their right to a secret ballot—guaranteed in Utah’s constitution—was violated when they handed marked but unshielded ballots over to neighbors working the polls. In parts of Salt Lake County, voters waited in long lines even after election results had been broadcast.

Between Utah’s presidential primary in February and the presidential election in November 2008 it seems there is much to be sorted out. From Ogden, the ACLU has received complaints of voting irregularities that, if proven, go against basic ideas of American elections.

“We had one report that somebody associated with one of the mayor candidates was placed in front of one of the tables where people sign in to vote with materials in favor of the candidate,” said Marina Lowe, an ACLU staff attorney. “We heard of election judges viewing as individuals were voting. Then there were questions about whether ballots were counted accurately. All of this is evidence to me and to our office that people are feeling the proper procedures were not followed and the integrity of the voting process was not maintained.”

Dorothy Littrell, a longtime anti-Godfrey gadfly, is one of the complainers. Littrell’s name was one of hundreds on a list challenged by Godfrey supporters for allegedly not living where they voted. Despite ID and a voter registration card, “I was told I cannot vote,” she said. “They didn’t offer me a provisional ballot; they just said, ‘You cannot vote.’”

Littrell went to vote at 10:30 a.m. Five hours later, having telephoned a Weber County election official, she was finally offered a “provisional” ballot. But Littrell says she wasn’t allowed to sign her name in the poll book and doubts her vote was counted.

The ACLU received reports that many Ogden voters showed up only to be told their polling place had changed and it was too late to get to their real one.

“We joked about it. Ogden is going to be known as the second Florida,” said Ogden City Councilwoman Dorrene Jeske. Far from being amused, she has asked for investigations from Weber County, state election officials and the ACLU.

Susan Van Hooser, the city councilwoman who lost to Godfrey, doesn’t want to stir things up, but does note cases in which would-be voters were made to leave and return with utility bills, something impossible for some renters. “People were made to feel they were doing something wrong,” she said. “I’m sure it’s legal, but I’m not sure morally it was the right thing to do.”

Godfrey did not return a phone call from City Weekly. Weber County Clerk Alan McEwan put out a two-paragraph defense of the election, writing that voting went well “with the exception of very few poll workers,” and the county had no interest in reopening the race.

“It is our intent not to expend further county resources and taxpayer dollars to appease a very few disgruntled people who have their own agendas of self-serving issues,” McEwan wrote.

Utah’s state elections office won’t be investigating, either. Michael Cragun, director of elections in the Lt. Governor’s office, said the proper appeals channel is through laws on the books covering all the alleged wrongdoing in Ogden.

But, even through the courts, the ability of the public to monitor elections in Utah may be limited. In a recent lawsuit longtime touch-screen voting critic Kathy Dopp claims Summit County has repeatedly denied her requests to examine voting records.

Brian Barnard, Dopp’s attorney, notes the Help America Vote Act was meant to prevent voter disenfranchisement, in part, by opening up voter-registration rolls for inspection. Utah law not only classifies some of those documents as secret but requires them to be destroyed. Utah law also appears to make public vote recounts—like those performed after the 2000 presidential election—impossible.

“It’s a matter of allowing a third-party watchdog group access to those records to make sure people are allowed to register and vote,” Barnard says.

Meanwhile, in Salt Lake County, election officials are trying to figure out how to persuade voters not to come to the polls. With the switch from punch cards to touch-screen voting, the county ended up with 40 percent fewer polling booths. A large turnout will overwhelm the setup, says county Clerk Sherrie Swensen.

Swensen has asked the County Council for extra money to heavily advertise early voting before 2008. Few people took advantage of the option this year, causing long lines at about 20 of the county’s polls. Along with voting by mail, early voting has worked in states like Texas, where 40 percent of voters cast a ballot before Election Day, she says.

The presidential primary in February might be a good test of what is in store next year. Utah is participating in Super Tuesday with Mitt Romney on the ballot, and Swensen expects at least 40 percent turnout. If the vote goes anything like the recent city election, it could be a train wreck.