Utah State Hospital [USH] incarcerated inventor Paul Pantone had yet another hearing in a West Jordan court this afternoon before Judge Royal Hansen. What made today so intriguing was Hansen was set to rule on the fate of the motion by Pantone and his supporters for the judge to recuse himself from Pantone’s case. In the bizarre labyrinth history of Pantone’s battles with the USH documented in City Weekly’s cover feature, "Fuel-Injected Lunatic" last year, today’s events provided the unique brand of dark entertainment those who have followed the story have come to expect.

A manacled Pantone wheeled himself into court on an office chair—a foot operation has left him unable to walk. He told the judge through his court-appointed public defender Karen Stamm that he wanted the recusal motion to go forward.

Hansen said he took all recusal motions seriously. Since this was signed by Pantone, whom the judge himself had previously deemed incompetent, it should be passed onto another judge to see if it has merit. 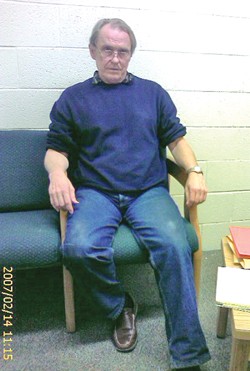 This left Justin Heideman, the Provo lawyer Pantone’s supporters hired early last year to get the inventor out of the USH, more than a little pissed. The recusal motion had been handed to Hansen the day the judge was to rule on Heideman becoming Pantone’s lawyer. Now it looks like Pantone, who wants Heideman to continue to advise him, will have to accept a new public defender instead. Heideman says he’s owed nearly $15,000 by Pantone’s supporters. He will not work on the case anymore unless that money is forthcoming before the end of this month.

What all this adds up to is no end in sight as to how long Pantone will have to linger in the USH.

Heideman is convinced he could have got Pantone out if his supporters hadn’t shot him and the case in the foot with the recusal motion. He was ready to proceed with the appeal of Hansen’s ruling that the USH could forcibly medicate the inventor. Now that appeal, along with Pantone, hang in legal limbo.

After Hansen’s decision to pass on the recusal, Heideman saw the contents of a Christmas package the judge had received. It contained a lump of coal. The return address was the North Pole. Pantone’s supporters’ website had briefly run a radio ad advocating such a tactic.

"Unbelievable," Heideman muttered about the briquette as he gathered with the middle to late aged group of Pantone admirers in a conference room. He did not hide his anger or disbelief at the group’s antics. He told them the recusal motion was "at best spurious, at worst frivolous."

Several of the supporters cited their concerns about a conspiracy to deprive the world of Pantone’s invention. They have long argued Pantone invented a device which allows cars to run on very little gas, but that oil cartels, governments and wealthy Utahns have conspired to suppress or steal it.

An exasperated Heideman issued a challenge. He told the supporters to arrange a working model of Pantone’s water-fuelled engine. He would then inspect it. If it worked, he would arrange for his TV media contacts to film it for local news stations. Thus, assuming the device delivered, the world would learn that the man who could save us from pollution, global warming and rising gasoline prices was being held against his will in the state asylum.

Since the roots of Pantone’s legal battle to leave the USH stem from the state’s claims of delusions of grandeur over his invention, quite how the Pantone Defense Project responds to this challenge from what looks like to be their rapidly disappearing legal counsel remains to be seen.