Inside the murky underworld of secondhand golf ball sales. 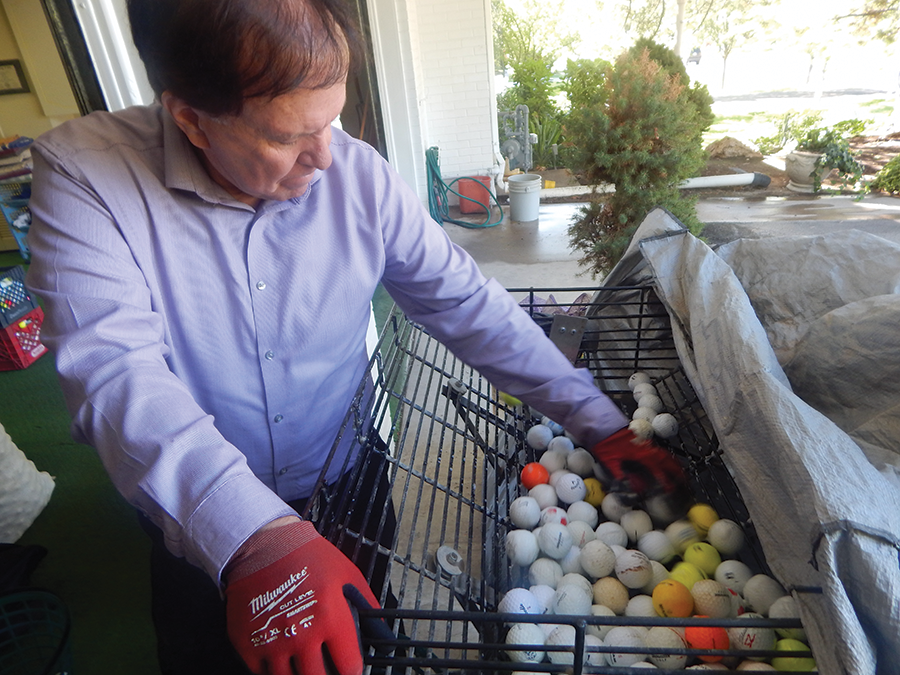 On a recent Wednesday afternoon, David is fighting a cold, dressed down in striped pajama pants and a tucked-in blue T-shirt. But he's still ready for business, taking calls on a Bluetooth earpiece as he swabs, sorts and bags thousands of used balls that he and Dennis—in wetsuits and scuba gear—recently retrieved from golf course ponds and lakes.

Dennis works at his brother's side, feeding hundreds of more balls through a $2,800 automatic ball washer. The machine has a black chassis the size of a deluxe barbecue grill, and it hums along as the balls tumble around inside, soaking in the suds of Dawn dish soap. Dennis runs the balls through several wash cycles, and tosses others aside to get a deeper clean in a top-secret solution.

"We're pretty meticulous on what we do here," Dennis says.

Balls are a central and yet essentially disposable item in golf. Every year, major brands like Titleist and Callaway rake in hundreds of millions of dollars on their most popular balls. Demand is freshly renewed every time a golfer knocks another one of these precious, USGA-approved items into a water hazard during a round, and David and Dennis Reese are among a handful of local divers who see profit potential in this limitless supply of secondhand product. But business ain't easy, with demand rising and falling depending on the seasons and the whims of local golfers and retailers.

"Let's be honest—you couldn't make a living doing this," David shrugs as he sorts balls by color and brand, stuffing them into Ziploc bags to make his own three-packs, six-packs and 12-packs for sale at pro shops around the city.

To get a sampling of just how many golf balls are in circulation locally, City Weekly filed a public-records request with the Salt Lake City Golf Division, which operates six full-service municipal golf courses across the city. According to the records, golf division officials made well over 31,000 wholesale purchases for single golf balls and golf ball packets to sell in pro shops at city-owned courses in 2019. In fiscal year 2018-19, the division spent $21,860 on range balls alone—flight-restricted balls rented out for $10 a bucket at city-run driving ranges. Since the new fiscal year began in July, division officials have spent another $7,885 on yet more range balls, replacing ones that were damaged or lost.

Matt Kammeyer, division director, says these whopping figures account for the way golfers burn through balls as a matter of course.

"Obviously, it's the primary component of the game. You need to hit a ball and balls get lost. People rarely hit them straight. They end up in ravines and trees and lakes," he says. "Typically, I'll go through three to four, sometimes as much as six balls in a round of golf. If you're not losing them, they still get worn out."

Kammeyer keeps up with the demand by making sure the courses' shops are stocked with a steady supply of balls. On the shelves, players can choose from popular models like the top-selling Titleist Pro V1 to more budget-friendly options from Volvik and Bridgestone. New balls sell for anywhere from $2 to $5 each; while used balls go for $1 apiece.

"It makes the most sense for us to have a good selection, because when somebody needs them, they're at the course," Kammeyer says, noting that shop buyers follow national sales reports to keep track of what's selling the most. "It's all demand driven." By year's end, they put the balls on clearance. "But next year, we try to have the latest and greatest available for sale," he adds.

One of the municipal courses, Glendale, sells pre-packed golf ball baggies from the Reeses. Operating under the business name DLR, LLC, the brothers have a contract with the city to dive for balls at the municipal courses; they're free to resell what they find in exchange for handing over a percentage of their bounty back to the golf course after each diving expedition.

Often, they end up finding good-quality, mint-condition balls that were lost only weeks, days, possibly even hours earlier. In the green-carpeted garage where they run their operation, they've packaged dozens of 12-packs of 2019 Titleist Pro V1s. They sell them for $16 a bag, a steep discount from the $47.95 that 12-pack boxes of new balls go for on Amazon.

The way the Reeses see it, all these balls are a potential gold mine. Acushnet, the Massachusetts-based company that owns Titleist, reported that it made $524 million in net sales of golf balls in 2018, a 2.3% increase from the year before. During that same period, Callaway drew in $195.6 million in total golf ball sales. David and Dennis, who also pay the bills by running a limousine service and selling steel pipe wholesale, insist that retailers at places like the golf division could be making big bucks of their own.

"They make more on a used ball than they do on a brand new ball—by far!" Dennis says of the pro shops they do business with. "The smart guys hire us, we package up balls, they resell the balls basically at no cost to them and then they have a 100% markup."

Other experts, however, seem perplexed at City Weekly's questions about golf balls.

Dustin Volk, the PGA golf pro who heads up Layton's Valley View Golf Course, says he sells the Reeses' balls in the pro shop but only makes modest returns, moving about $2,000 worth of used balls per year. Kammeyer says well below 10% of the Salt Lake City Golf Division's annual revenue comes from retail sales, which includes golf balls, clubs and other merchandise.

"We try to break even in the end. Some things we make money on, other things we lose it," Kammeyer says of the retail sales. Green fees and cart rentals serve as a bigger and more reliable revenue stream, he adds.

Even so, the Reese twins take pride in their product.

At the family garage, Dennis tosses his scuba gear into a silver GMC pickup to go diving for more balls. His destination that day is a muddy-green pond at the Forest Dale Golf Course a couple miles away. Before climbing into his wetsuit, he drops by the course's shop to say hi. Most of the balls on sale are new, but there's also a bowl of used balls, sitting next to the cash register like a candy bowl in an office waiting room.

Dennis fishes through the bowl and shakes his head. He suspects a rival diver has been in recently, selling the shop inferior product.

"We wouldn't give you a Nitro ball," he tells the clerk as he inspects a lower-grade ball. "We wouldn't put a Pinnacle in there either that was scuffed."

That's just how it goes in the used golf ball game. There might be rules out on the course, but under the water it's wide open, and anyone with an air tank and a canvas bag can come sweeping in with a hustle of their own.