Victim of the state or child predator, Scott Gollaher’s judgment day is looming

On July 13, 2012, just before 11 a.m., two groups of police officers armed with search warrants swooped in on separate addresses in Morgan County and Salt Lake City. Their target in the bucolic rolling hills of Morgan County was a mansion used as a weekend retreat by property developer Scott Gollaher and his wife Sharon. Their target in downtown Salt Lake City was the Gollahers' condo in a neighborhood north of Temple Square.

The search warrants followed allegations by two 11-year-old girls claiming that Gollaher, a convicted child sex abuser, had molested them during their May and June 2012 recreational visits to the Morgan County residence.

A small contingent of officers entered the unfurnished Morgan County property, while a much larger group of cops from four police agencies and FBI agents attached to the Utah Internet Crimes Against Children task force knocked on the door of the Salt Lake City condo, then battered it open with a ram. Hands raised above his head, 53-year-old Gollaher emerged from the bedroom and was cuffed.

Along with Gollaher's wife, Sharon, the cops also found an 11-year-old girl, the daughter of a friend of the couple, according to court testimony in Morgan County. A Salt Lake City detective took the child to the Children's Justice Center for an interview, and then Child Protective Services workers took her to the Christmas Box House. FBI special agent Jeff Ross attempted to interview Gollaher, who was already requesting a lawyer. "Don't take my silence as acquiescence of guilt," Gollaher told him, Ross recalled in a Salt Lake County court hearing.

Child molestation charges are nothing new for Gollaher (pronounced "GOLL-yer.") The talkative, heavy-set building contractor did four years in prison for a 1996 jury conviction for child sexual abuse involving a 10-year-old girl. "I was the first person to go to prison for a touch," he says to a City Weekly reporter during a jailhouse interview, referring to his victim's testimony that he rubbed her genitals for six seconds.

Since that conviction and time served—and prior to his current set of charges—he was prosecuted for one count of child sex abuse in 3rd District Court in 2011, but the case was dismissed after the victim recanted.

If Gollaher is convicted this time around, he may not see daylight again. "I'm facing charges that could put me away for the rest of my life," he says.

Former Salt Lake City cop turned Morgan County prosecutor Jann Farris says Gollaher "gets a lot of people's attention for being a child molester sitting in jail." While the state sees him as a monster—"the worst of the worst," Farris says—Gollaher paints the state as the true monster, keeping him locked up for several years while they build their cases against him, he claims.

Farris says Gollaher "should stop molesting children" if he wants the accusations to stop. "I have just had to read so many reports and videos," he told Morgan County court. "I am so pissed at this guy."

The world of Scott Gollaher is one layered in ambiguity, denials and accusations against those aligned against him, be they victims, witnesses or part of the criminal justice system. He describes his alleged child victims and their families as being motivated by a desire for attention. "They got their social reward already," he says. City Weekly interviewed the parent of an alleged victim and the parents of the victim linked to his 1996 conviction. Those interviews highlighted that Gollaher got close to parents of children he was later accused of molesting by exploiting Mormon cultural commonalities or by allegedly presenting himself as an "expert" in child sexual abuse who can counsel child victims. Farris says Gollaher is "enough of a chameleon to use whatever he has in common with that person to build common ground."

Gollaher comes across as dismissive or even angry when his past is brought up, preferring to focus on current problems. But some issues in his past aren't so easy to dismiss. Take, for example, a chilling four-page list provided to City Weekly by one of the mothers of one of the children listed among 100-plus children's names he compiled in jail, prior to going to prison in 1996. Whether it's a list of victims or, as he contends, a list of children he had the opportunity to victimize but did not, it's a document that haunts parents of offspring who are named on it.

After dozens of interviews with former friends, colleagues, business partners and relatives, the truth about who Gollaher is remains as opaque as the thick bifocals he prods repeatedly back up his nose. Indeed, 15 years after he was initially released from prison after, he says, finally admitting to the Board of Parole and Pardons that he committed the crime he was sent to prison for, he still dances around his own culpability. He says he lied to the board because that was the only way to get out of prison. Now, he says, "I don't have any memory of touching her."

There's a crudeness and tenacity to him that creates a formidable and at times overbearing presence in the courtroom. Gollaher says he has been the victim of conspiracies because he refuses to hide his conviction. His ambition led him to develop the Rail Event Center, a multimillion-dollar concert venue a block from West High School. His sex-offender registry status brought controversy and consternation, all of which was highlighted in a February 2010 City Weekly cover story called "Bad Vibrations."

He alleges that others have repeatedly tried to use his conviction against him, whether to send him back to prison or extort money from him. "I have had people sit in my house asking me for a $1,000 a week, or they're going to call my parole officer," he says. His parole was terminated in 2010.

Behind bars now for almost three years, he is set to stand trial in Morgan County in late April 2015 for one of the two sets of cases against him. Gollaher complains his court-appointed legal defender in Morgan County did little for him over several years, while the state and the FBI, he claims, have hidden evidence from him.

"That's the first thing you learn at law school," prosecutor Farris says. "Don't have the facts on your side, argue the law."

Now, Gollaher is representing himself in Morgan. "I'm running around with a fire extinguisher that doesn't have any water in it," he says. He fights hard, flooding Morgan County court with dozens of motions and subpoenas to try to pick apart the evidence against him and raise questions about his accusers. "I want the truth," he says. Prosecutors and law enforcement "are afraid of the truth. Some of this stuff makes me look fucking innocent." He calls FBI agent Ross the "architect" of the evidence against him. 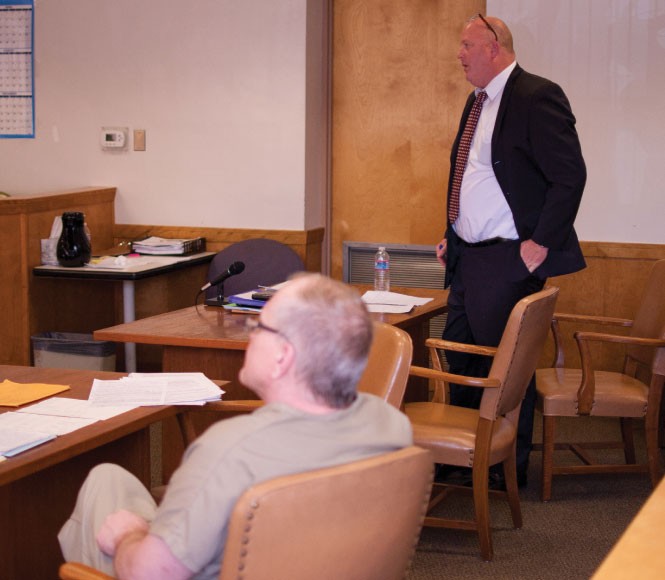 Gollaher's response to the question of whether he's attracted to young girls varies over time. In 1998, a parole-board hearing officer asked him if he had "a problem with sexual deviance?" Gollaher replied that he had been "challenged" with such an issue in the past, then added, "I suspect I'll have it for a lifetime, Sir." Ask the endlessly combative Gollaher now if he's attracted to prepubescent girls, he bats the question back to the reporter. "Are you?"