No Country For Bikers

Lawmakers are trying to drive biker gangs out of Utah 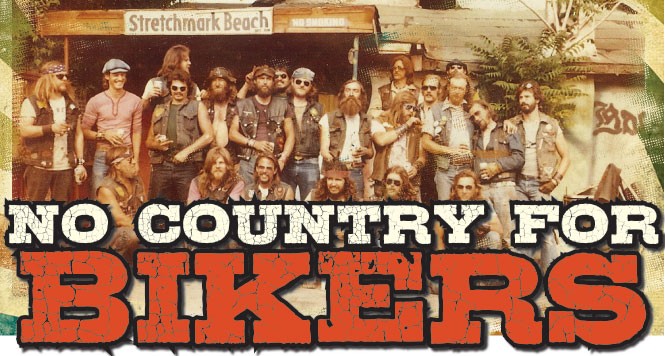 Pigpen, Harpo, Savage and Caesar are behind the bar, their ashes sealed inside the cylinders of the panhead and shovelhead motorcycles that they loved and rode while they were alive.

These urns stand guard inside the red, gold and black brick house on Edison Street near 900 South that is home to the Barons Motorcycle Club, where a glowing soda-pop machine dispenses cans of beer, and on a Thursday night at 5 p.m., Barons are trickling in, the growling of Harleys marking their arrival.

Founded in 1966, the Barons were for decades one of two well-known local motorcycle clubs. The other is the Sundowners.

Now, though, motorcycle clubs are proliferating in Utah. According to law enforcement, the number of motorcycle club members in Zion has shot up by 300 percent in the past five years. 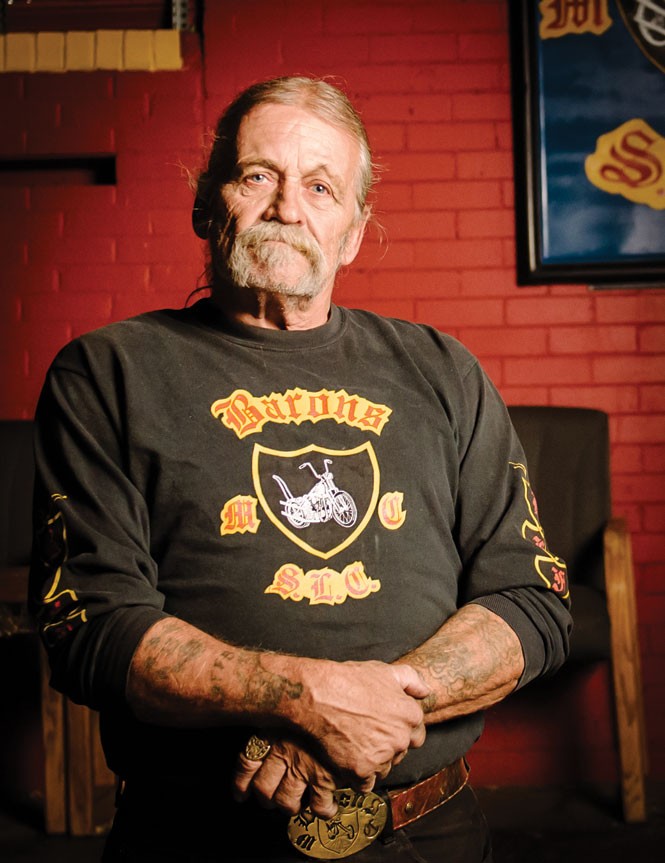 There is little hard data to support this figure, though from his perch, Ron "Dirtbag" Simmons, president of the Barons, says this number looks more like 1,000 percent.

"There used to be three patch clubs: us, the Sundowners and the Vietnam Vets started, then came the Bandidos, and now there's 10 [to] 15," says Dirtbag, who, along with Barons Vice President Lebowski and former Barons president Parker, was interviewed on a Sunday morning over breakfast at a bar on State Street. "Every day I see another patch."

But besides having more bearded, leather-jacketed, patch-wearing, motorcycle-riding men on the streets of Utah, the presence of these clubs has resulted in little trouble.

No one is more aware of this than the Barons, which, its ranking officers say, is a lot like a club that a pack of children would build in the backyard: a group of people who think alike, live alike and share a passion for motorcycles.

Dirtbag says the rough and carefree days of the 1960s, fun as they were, are simply a thing of the past.

"Times have changed," he says. "And there are probably some groups that still try to abide by that '60s mentality, and it just doesn't work."

But, struck by the increasing number of motorcycle clubs in Utah, some in the law-enforcement community have resolved to take a stand.

In July, during a meeting of the state legislature's Law Enforcement & Criminal Justice Interim Committee, lawmakers fielded a nearly hour-long presentation from Utah County Sheriff's Sgt. Lane Critser, who told them that outlaw motorcycle gangs are on the rise in Utah. He also related a string of titillating stories about violent outlaw motorcycle gangs, known as OMGs.

But none of the shootouts, sweeping drug-trafficking arrests and gun-running stories happened in the Beehive State.

Critser acknowledged as much early on during the hearing, saying that the only large case he's ever heard of in the state of Utah involving motorcycle gangs came in 1999 when several Sundowners were indicted on various federal charges.

But Critser went on to detail multiple harrowing episodes across California and Nevada that he has been involved with. Many of these large arrests involved national motorcycle clubs like the Bandidos, Mongols, Vagos and Hell's Angels—all of which have chapters in Utah, with the exception of the Hell's Angels.

It is this migration into Utah in recent years by national clubs that has law enforcement on its toes. Critser said at the July meeting that these clubs are making a play for dominance in Utah.

"It's like a gold rush," Critser says. "Everybody's trying to get here and establish domination over the state so they can run a variety of criminal activities and make the money in the state."

Comments like this from Critser, however, aren't anchored by statistics.

According to a lieutenant with the state's Department of Public Safety, despite the rising numbers of motorcycle clubs and members, no uptick in outlaw motorcycle gang crime has occurred in Utah. 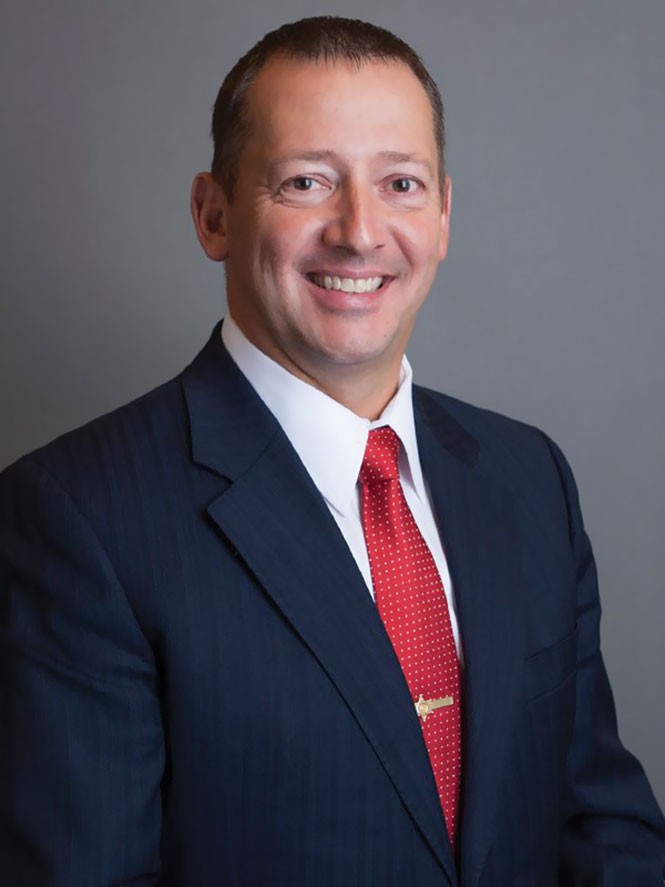 But Rep. Paul Ray, R-Clearfield, who put the "gang issues" matter on the agenda, promises to introduce gang legislation in the upcoming session that he says will include language on motorcycle gangs.

Since that July meeting, Ray has met with representatives from several motorcycle clubs, including the Barons. Dirtbag says that Ray told him that, when his proposed law is penned, Dirtbag will get to take a look before lawmakers do. For this, the motorcycle clubs are glad.

The Barons have a long history of sticking up for themselves, whether that is in a barroom, or on the floor of the state capitol. That guy ripping down the freeway on his motorcycle, hair blowing helmet-free in the wind, can put the majority of his thanks into the laps of the Barons.

And they don't want any law to lump them in with criminal street gangs—an occurrence that would only increase the harassment motorcycle riders who wear jackets emblazoned with patches say they already face.

"That's why we're active," Dirtbag says. "Because every time I go out on a Sunday drive on my bike, to get pulled over, field-carded and get detained for an hour while they run warrant checks and all that ... it's cumbersome. It's a pain in the ass." 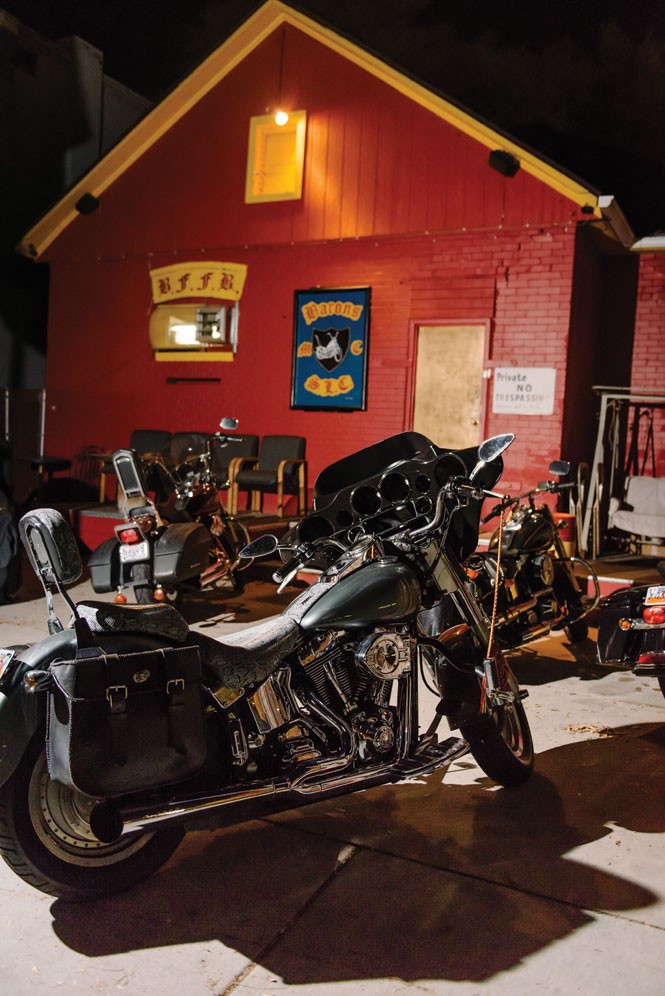 The Barons have had their clubhouse on Edison Street since 1976. As Dirtbag walked around the clubhouse one October evening, he pointed out a spot where the club's mascot, a Doberman named Max, is buried. Dirtbag says Max used to play fetch with a 15-pound bowling ball.

"Max would run after that and grab it with his teeth, slide on his paws, and then he'd bring it back, and if you weren't paying attention, drop it on your toe," Dirtbag says.

Dirtbag spots a neighbor dog and apologizes: he has to go say hi. He addresses the dog in a sweet, high-pitched voice, trying to lure it to the fence so he can pet it.

A few minutes later, one of Dirtbag's brothers (a fellow Baron) shows up and reveals a new set of motorcycle handlebars in his trunk. "Alright!' Dirtbag barks. He explains that his brother is building him an outrageously fast bike. When it's done, Dirtbag will have six motorcycles in riding condition.

Dirtbag knows that more and more national clubs are setting up shop in Utah. Some might even contain men who break the law. But Salt Lake City is Dirtbag's home; he and the rest of the Barons live here and, just like everyone else, want to keep living here. In order to do this, Dirtbag and his fellow Barons simply get along and contribute to their community. The neighborhood, a half a block off of State Street, is one of the safest in the city, Dirtbag says. The Barons do an annual toy drive for Primary Children's Hospital and a blood drive for the American Red Cross.

This ability to get along has been noticed by Critser, who at the July meeting at the state capitol told lawmakers that for some reason, the Barons "are more of an associate of all outlaw motorcycle gangs."

"They tend to kind of host everybody," Critser says. "We're not really sure if they think they're Switzerland or what the deal is."

And Ray says that just because law-enforcement agencies haven't seen a rise in crime relating to motorcycle gangs doesn't mean it's not happening. "What you find in the OMG community is a lot of the crimes are committed against each other, so it's not reported to police," Ray says. "They police themselves; the public is caught in the crossfire."

All of this talk of violence, gun-running and drug trafficking doesn't resonate with Lebowski, vice president of the Barons.

"This isn't Sons of Anarchy," says Lebowski, who has long graying hair and arms covered in tattoos, adding that he suspects the hit FX TV show is responsible for informing Ray's beliefs. "People watch that and they think that's what happens. You realize how long we'd last if we did the stuff that they do on TV? We wouldn't last."

Ray denies that Sons of Anarchy has anything to do with his desire for a new law. And he insists that the presence of Mongols, who are presently under a federal indictment, is evidence enough that any rise in motorcycle gangs must be pre-empted by strict laws.

"You can't say, 'Look, I'm a Mongol, but Utah Mongols are pretty nice guys,'" Ray says. "If you're in an outlaw motorcycle gang, you're into criminal things."

Statements like these are exactly what have the motorcycle community worried that they'll be targeted by law enforcement just for looking a certain way.

"It's just smoke and mirrors is all that is," Lebowski says. And the Barons, he says, are not "guys that run around and do irreparable damage to the community. We're talking about guys sitting on $20,000, $30,000 motorcycles that like to ride. These are guys that are stand-ups in the community. They're not some lowlifes that crawled under a rock and decided to be bad boys."

The committee took up the question of motorcycle gangs again in October. At this meeting, Eric Stine, education coordinator for the Utah chapter of American Bikers Aiming Toward Education (ABATE), told the committee that lumping motorcyclists—even ones that wear three-piece motorcycle gang patches and look tough—into the category of a criminal gang would be a lot like condemning all Catholic priests because some are pedophiles. And he reminded the committee that they, too, are in a gang.

"The other day, I was looking up the definition of 'gang,' and it's really hard when you start putting people in groups," he said. "Because, quite frankly, you are a gang of legislators based on the technical Webster definition."