No Krooked Path to Success

Krooked Kings find their sound flying by the seat of their pants. 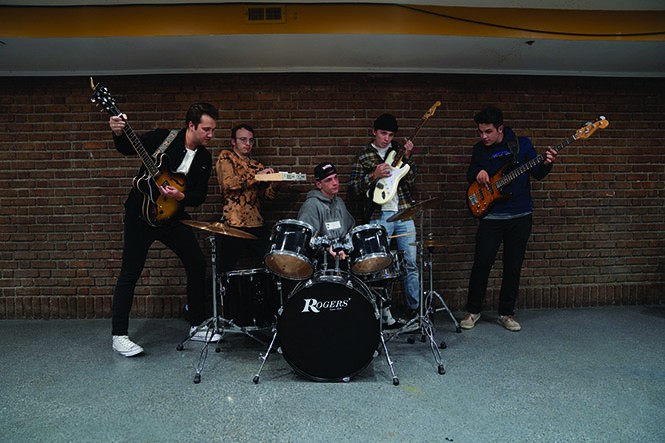 The college years are a time when many folks begin to dabble in the world of music-making, even as their own tastes and ideas about what's cool change. That's been the case for Salt Lake City-based up-and-comers Krooked Kings. Its founding members, Oli Martin and Paul Colgan, are friends who, though at different points in their lives now (Colgan has graduated and Martin is still in school) have joined together in navigating self-discovery, channeling it into music that's a fusion of their growing tastes. The result is a surprisingly smooth output of indie-rock with a deftly delivered dose of surf that doesn't tip into the region of jangled-out pop that most self-described surf bands deliver.

It's been a busy year for the pair, and just resulted in the release of their first EP, a six-song self-titled work featuring slick production by local downtown recording studio Red Light Recordings. But it all began with Martin, who, after spending time on a LDS church mission, got home and just started playing music by himself. He ventured into appearing in shows now and then with another friend before finally reaching out to Colgan. "We kind of knew each other from before," Colgan, 23, explains of their relationship. Martin's older brother, was in the same University of Utah fraternity, Sigma Chi, as the bandmates. "He just reached out to me and I was like, 'Yeah, I've been doing music since I was in high school, so I might as well,'" Colgan continues. "It just took off from there; we started molding a style, and by the time last summer rolled around, we piled some money together and rented a studio to record our first single." That single was 2018's "Hesitation," which they "basically blew [their] life savings on."

Their EP, which came out at the beginning of this month, features songs where the two swap vocal duties, exhibiting the kind of indie-pop prowess that should keep them moving in the right direction. "Amsterdam" is a prime example of their best qualities, an up-tempo track where Martin laments an old flame executing plans of romance in Amsterdam with, alas, someone else. The EP is full of playful songs that have an air of trying to keep one's cool despite being oh-so-invested, but it makes them approachable, relatable, and they fit right into the world of bright-faced indie rock that eyerolls at its own ills and ails.

This might be a result of Martin being a self-described Bon Iver fanatic, reluctant to engage in anything besides acoustic music for a long time. Detailing his time making music before the band, he explains, "I was into really soft acoustic sets and ... I was still playing with other people, but I was really hesitant to have any kind of distortion on a guitar. I was like, 'Whoa, whoa, whoa, I just want this pure acoustic sound.'" But, after beginning to play with Colgan (who loves the more upbeat work of The Strokes), and with their lineup which now includes Dave Macey on keys, Matt Monnosson on bass and Jay Flynn on drums, he says he gave in to the sweet sound of guitar manipulation.

"I really started to dig that sound. I got into beach rock," Martin says, with a little self-aware smirk—possibly because, even as someone new to the genre, he's aware of the loaded joke material that comes along with the popular genre these days. Maybe his wry attitude has to do with being a bit of a sore thumb in his frat community, describing Krooked Kings' music as "not technically the most frat-culture music." But Martin asserts, "We're trying to sway minds here!"

Another attempt to sway minds comes by way of their album-release show, where they hope not only to bring their fraternity friends over to their indie-loving side, but anyone in the community—and contribute to a good cause. The event benefits the Huntsman Cancer Institute, and features fellow locals Blue Rain Boots and The Moss. "Last year in the spring, we did a little philanthropy concert during the week in the back of our house, which was pretty fun. We had a bunch of people there and raised some money. This year I was like, I wanna go all out with it, make it big," Martin says, describing the inspiration for their upcoming show.

Deciding to bypass the booked and busy October schedules of local venues, they're opting for the large space of the Infinity Event Center (booked with the help of their frat's philanthropic board), a bold move for such a new, fresh band. "I thought it would be fun to get everyone around and have it so that everyone can come, whether they're in the frat or not, so we can raise as much money as we can," Martin says. For his part, Colgan emphasizes how much effort they're putting into the event's success, admitting, "We're flying by the seat of our pants at this point, but it's coming together better than we'd hoped."