News: J.P. Garman spends his days trying to find a country that will claim him. 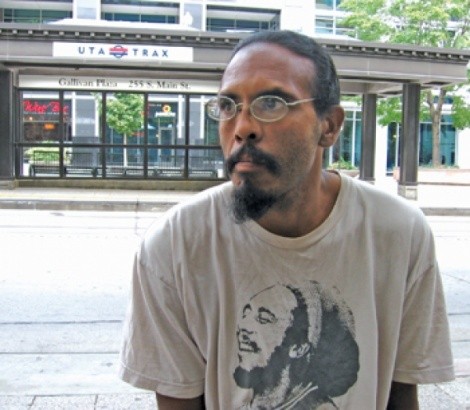 John Paul Garman’s West Valley City roommate doesn’t want her name in the paper. She can’t put Garman’s name on the lease and fears the landlord will find out he’s there. Garman himself lives in constant fear of being stopped by police and turned over to immigration authorities.

He isn’t an illegal immigrant. As far as anyone knows, he’s been in the Untied States all his life. But Garman isn’t a U.S. citizen, either. Garman—“J.P.” to his friends—isn’t a citizen of anywhere.

He doesn’t have a Social Security card, driver license or passport. He can’t leave the country because he’d never be allowed back in. He is 33 years old—at least as close as anyone can guess.

To prove who he is, Garman carries everywhere a briefcase full of papers: his birth certificate, adoption papers, even his immunization records from grade school—to prove to any federal immigration agents who cross his path he’s been in the United States since childhood.

His only form of identification isn’t much good either: prison ID from the California Department of Corrections, complete with mug shot, from a stint for a burglary conviction at age 18. His car was impounded this summer in Salt Lake City. It is something Garman’s used to. He buys a car, is pulled over, has no ID; the car is impounded. He’s now on the part of the cycle where he saves up to buy another car—while paying $50 per month toward the $500 fine he received for driving without a license or insurance.

“I don’t have a life,” Garman says. “I’m not responsible for that, but who is?” He’s been trying to find out for eight years.

Left at 3 years old with a babysitter at a California motel and adopted by U.S. citizens, no one ever bothered to get Garman citizenship as a child. Now it seems it’s too late.

Unable to legally hold a job, Garman relies a lot on friends. In Utah, that includes Shalynn Hansen who, with her sister, drives Garman for errands.

“It’s hard for him to even be able to get a little job. He can’t buy a car or buy a house, simple things everybody takes for granted,” Hansen says.
Social services workers who championed Garman’s cause in Merced County, Calif.,—where he lived before moving to Utah last year—came tantalizingly close to getting Garman his elusive citizenship papers.

Rhonda Walton, who worked Garman’s case at the Merced County Human Services Agency, says had he been adopted a few years later, he likely would never have been in this situation. Today, a child can’t be adopted until citizenship status is confirmed. “But this was 30 years ago,” Walton says. “They weren’t as concerned to address alien status.”

As a result, Garman’s birth certificate was filed with “speculative information” saying he was born in Tijuana, Mexico, based on the guess of motel neighbors.

He likely would have become naturalized at 18, but that’s when Garman went to prison. When he got out, his adoptive parents were dead. His prison record means Garman can’t even get a green card required to legally work as a noncitizen.

Last year, social service workers in Merced County found a federal law that seemed tailor-made for Garman’s circumstance: the “foundling” section of the 1952 Immigration and Naturalization Act, which allows “found” infants of unknown parentage to be declared U.S. citizens.

After getting a judge to declare Garman’s birth parents “unknown,” Merced County helped him apply for a passport based on the provision. He was rejected. Garman wasn’t “found,” the federal decision states, but “left” at the babysitters.

Walton says Garman’s only hope appears to be an act of Congress. Some federal politician will need to take an interest in Garman’s case and slip a line into a bill to the effect that “J.P. Garman is now a citizen of the United States.”

“There’s not much we can do at the local level other than advocate for him every time someone gets interested at the federal level,” she says.
Garman has recently been in touch with the Salt Lake City offices of Utah’s U.S. Senate delegation.

Awaiting amended adoption papers with the offending “Tijuana” information removed, Garman is hopeful. At the same time, he says the idea of citizenship after so many years as a nobody “scares the heck out of me.

“I’ve been so used to my path in life. When life becomes like everybody else’s, what happens to me?”