Nosh Around the Clock

Where to find the best food from dawn till dusk

There are folks who love breakfast more than any meal, and some who skip it altogether. Some people use the power lunch to seal business deals, while others consider brunch the best meal of the entire week. And then there’s the type who enjoys nothing more than a late-night snack. No matter what hour you prefer to do your ingesting, here are some excellent restaurant options for breakfast, brunch, lunch and late-night meals, plus a dinner tour of world cuisines. As the Italians say, mangia bene!

Blue Plate Diner
Not only does Blue Plate Diner serve killer breakfasts, but it does so all day, every day. Want traditional eggs Benedict or vegan pancakes for dinner? Blue Plate Diner has ’em for you. Diners, Drive-Ins & Dives’ Guy Fieri liked the corned-beef hash so much that he called it “money hash.” The funky, fun atmosphere and jammin’ jukebox add to Blue Plate’s appeal. 2041 S. 2100 East, 801-463-1151, TheBluePlateDiner.com

Eggs in the City
If you love old wood floors and the homespun feel of a classic diner, Eggs in the City is for you. Although the restaurant isn’t that old, it has a folksy, wholesome, old-time ambiance and feel. It’s a terrific, kid-friendly place for a family breakfast, with all the standard fare, plus some harder-to-find eating options, like blintzes or the “Mama” breakfast burrito. 1675 E. 1300 South, 801-581-0809

Over the Counter Cafe
If you haven’t visited Over the Counter Cafe in a while, you should know that this once cash-only operation now accepts credit and debit cards. Other than that, OTC has the same local-diner appeal, with veteran cooks, waitresses and owners who have kept it going for 30-plus years. Huge, fluffy pancakes, delicious multigrain French toast with walnuts and whipped cream, and the justifiably renowned bacon makes OTC a must-visit for breakfast. 2343 E. 3300 South, 801-487-8725, OverTheCounterCafe.weebly.com 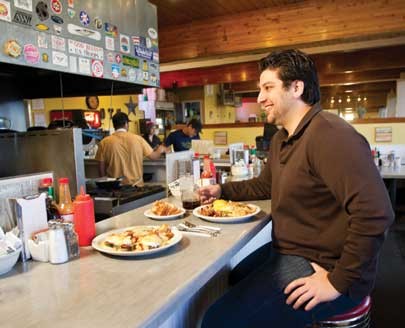 Little America Coffee Shop
If you haven’t visited Little America lately, you might not know that the Coffee Shop recently got a complete facelift and renovation. Thankfully, though, the popular breakfast offerings didn’t change much. Rib-sticking traditional breakfasts—like the Eye Opener, the Santa Fe, the Country Fare, the European and the Wasatch Mountain Man casserole—will provide all the fuel you need for the day ahead. 500 S. Main, 801-596-5708, SaltLake.LittleAmerica.com/dining/coffee-shop

Millcreek Café & Eggworks
Although Millcreek Café & Eggworks sports a sleek and snazzy modern design, the vibe here is friendly, warm and old-fashioned, with service second to none. Omelets are custom-made to your specifications, so if you want to kick off the day with jalapeños, no problem. There are also scrumptious breakfast wraps, breakfast paninis, veggie eggs Benedict and zesty huevos rancheros. Don’t forget to order a side of chile verde. 3084 E. 3300 South, 801-485-1134, MillcreekCafeAndEggworks.com

Olympian Restaurant
No one dishes up breakfast quite like the Greeks, which is why Salt Lakers have been going in droves to the Olympian for many, many years. Regulars often affectionately refer to the Olympian as their favorite “greasy spoon” for its can’t-miss menu items like the bacon waffle (yes, a bacon-filled waffle), perfect hash browns and Greek omelet, plus warm greetings from owners Tony and Maria. 2181 S. 700 East, 801-487-1407

Royal Eatery
If an eatery that’s all-American, inexpensive and old-school appeals to you, then breakfast at Royal Eatery is a slam-dunk. But don’t come looking for fancy food: Royal Eatery serves up classic eggs, bacon, home fries, three-egg omelets and the best French toast you’ll ever get your lips around. Hang around until lunchtime for equally awesome burgers. 379 S. Main, 801-532-4301

Ruth’s Diner
Although Ruth’s underwent a facelift a few years ago, in most ways it’s still the same classic-style diner that Ruth opened back in 1930 as Ruth’s Hamburgers before hauling a trolley car up Emigration Canyon, where Ruth’s currently resides. There’s no better place to enjoy breakfast than on the deck in warm weather while you tackle the famous Mile High biscuits & gravy. 4160 Emigration Canyon Road, 801-582-5807, RuthsDiner.com

Park Cafe
Want to get your day off to a great start? The Park Cafe is the place to do it. This cozy, friendly eatery is always brimming with positive energy and good vibes—oh, and the food is terrific, too. The banana pancakes totally rock, as do the rib-sticking biscuits with sausage gravy. But get there early, because those bodacious biscuits tend to sell out. 604 E. 1300 South, 801-487-1670, TheParkCafeSLC.com

Avenues Bistro on Third
This quaint one-off bistro isn’t your typical brunch spot, but brunch menu items are served all day and they’re truly unique. Owner Kathie Chadbourne’s brunch menu features dishes such as an artichoke stuffed with scrambled eggs and topped with black truffle oil and Parmigiano-Reggiano. Then there’s the bowl of eggs with sauteed spinach and prawns—definitely not your grandpa’s brunch! 564 E. Third Ave., 801-831-5409, Facebook.com/AvenuesBistroOnThird 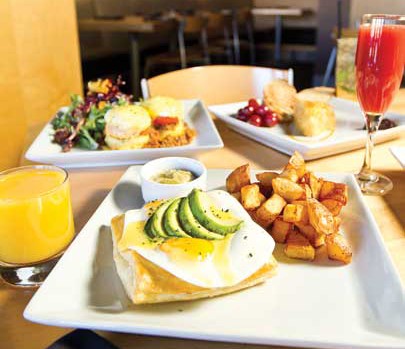 Cafe Trio
Whether at the downtown location or in Cottonwood Heights, Cafe Trio’s brunches are an abundance of riches. There are rustic flatbreads to choose from, along with wood-fired pizzas, calzones and panini sandwiches. And, of course, there are more than a dozen traditional breakfast items as well, like short-rib hash and housemade granola, along with soups, salads and mimosas, bloody marys and Bellinis. 680 S. 900 East, 801-533-8746; 6405 S. 3000 East, 801-944-8746, TrioDining.com

The Copper Onion
Whether you like your brunch traditional or with a creative spin, The Copper Onion is the place for you. On the classic side, there are menu items like biscuits & gravy, huevos rancheros, veggie frittata and challah-bread French toast. And then, for out-of-the-box brunch, you could enjoy a Cuban sandwich, patatas bravas, ricotta dumplings or leek fettuccine. Be sure to try the tasty Bloody Bull libation. 111 E. 300 South, 801-355-3282, TheCopperOnion.com

Grand America Garden Café
Luxurious. Opulent. Decadent. Delicious. Those are just a few words to describe the over-the-top brunch at Grand America’s Garden Café. This is the big daddy of all brunches: an all-you-can-eat extravaganza featuring a seafood station with chilled shellfish, including King crab, sushi and ceviche; an artisan cheese cart; crepe, omelet and pancake stations; a carving station with Prime rib and Niman Ranch roasted pork; a food station for kids; a ginormous buffet with all sorts of hot and cold dishes; and more, including live music. 555 S. Main, 801-258-6708, GrandAmerica.com

Pig & a Jelly Jar
As you might guess from its name, Pig & a Jelly Jar is all about comfort food, and that goes double for the breakfast/brunch menu, which is available all day. The made-from-scratch biscuits with herbed country gravy are awfully tempting, but then, so are the chicken & waffles. The three-egg frittatas are fantastic, and for simpler fare, the housemade granola is great. Wash it all down with a sparkling wine & strawberry cocktail called the Strawberry Smash. 401 E. 900 South, 385-202-7366, PigAndAJellyJar.com

Roots Cafe
Breakfast and brunch is served all day at Roots Cafe, featuring organic, sustainable, local foods and fair-trade coffees. Among the omelets—which are made with farm-fresh eggs—there’s a tasty vegetarian omelet option called The Gardener. And for French-toast lovers, the housemade apple-pecan bread-pudding French toast is hard to refuse. Also try the “PETA” breakfast sandwich with veggie sausage. 3474 S. 2300 East, Millcreek, 801-277-6499, RootsCafeSLC.com

Del Mar al Lago
Del Mar al Lago is justifiably well-known for its outstandingly fresh ceviche. However, there’s a lot more going on here than delectable citrus-marinated seafood—like lunch. Lunch specials at Del Mar al Lago go for a mere $8.50 and include salad or soup, a soft drink and menu items such as sauteed duck, lomo saltado, vegetable and seafood soups, fish dishes and much more, plus a full bar. Pisco sour, anyone? 310 Bugatti Drive, 801-467-2890, DelMarAlLago.com 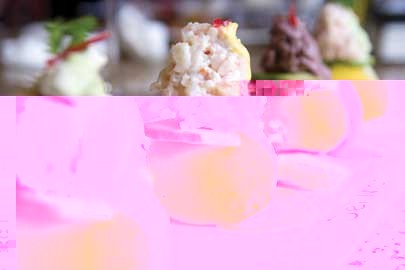 9th South Delicatessen
If there’s a better Reuben sandwich in town, we’ve yet to find it. But that’s not the only thing going on at 9th South Deli during lunchtime. There’s also a kick-ass French dip sandwich; classic albacore tuna with mayo, celery and red onion on rye; an all-beef kosher hot dog; and a free range egg-salad sammich. Round out lunch with Dr. Brown’s soda and a black & white cookie. 931 E. 900 South, 801-517-3663, 9thSouthDeli.com

Feldman’s Deli
Jewish delis are few and far between in Utah, so thank goodness for Feldman’s. This is the real deal—a deli with boiled & baked bagels made in-house, the best corned beef on rye this side of the Continental Divide, heavenly pastrami, marvelous matzo-ball soup, all-beef salami, potato knishes, kishka, gefilte fish and much more, including beer. 2005 E. 2700 South, 801-906-0369, FeldmansDeli.com

Spedelli’s
Somehow, the eclectic ambiance of Spedelli’s, with its wood floors, brushed-metal walls and blue plastic chairs, just works. This is a fun and funky place that doesn’t take itself too seriously, although the food is seriously good. Pizzas, calzones and strombolis are the specialties, but there are also sandwiches, salads, tacos, appetizers and desserts on the menu, not to mention beer. Oh, yeah, there’s poutine as well. Like I said: not too serious! 2352 Foothill Drive, 801-410-4842, Spedellis.com 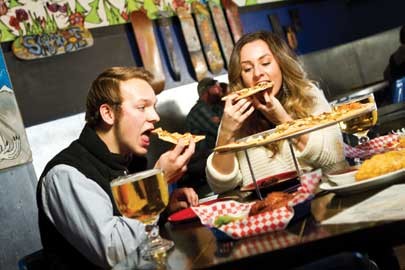 Grove Market & Deli
This neighborhood market and deli has been serving up delicious stuff-your-face sandwiches since it was opened in 1947 by Greek immigrant Pete Savas. Grove Market & Deli is still family-owned and offers ginormous sandwiches like the Big John—with seven deli meats, two cheeses and a pile of trimmings. Also try the tasty salads and hot foods like the Polish sausage and meat pie & chili. 1906 S. Main, 801-467-8860, GroveMarketDeli.com

The Other Place
For many Salt Lakers, The Other Place is the only place for lunch. The old-fashioned Greek-American restaurant features no-nonsense fare like spectacular lemon chicken & rice soup, fall-off-the-bone braised lamb shank, great gyros and something called The Pile: a double order of hash browns with onions, peppers, mushrooms, zucchini, tomatoes and two eggs topped with heaps of feta cheese. Whew! 469 E. 300 South, 801-521-6567

The Robin’s Nest
If it can be made into a sandwich, The Robin’s Nest probably has it. These are some serious sandwiches, although the menu looks anything but serious, with sandwich names like The Oinkity Doink, The Aloha Oink, The Flower Child, The Yummy Hummy (homemade hummus), The Not-So-Average Joe and The Sink, which contains everything but. 311 S. Main, 801-466-6378, RobinsNestSLC.com