Not So Free Speech 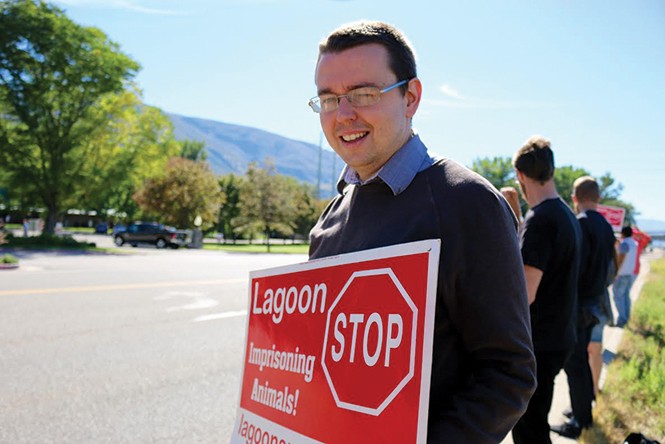 From the Rev. Martin Luther King Jr.'s 1963 March on Washington and the 1970 Kent State demonstrations in Ohio, to the 2011 Wisconsin Teacher's Strike, protests have been instrumental throughout U.S. history as citizens have used their right to free speech and assembly to speak out against perceived injustice. But the right to free speech isn't always free. In fact, when protesting in many Utah locales, it often comes with a price tag.

Activists with the Utah Animal Rights Coalition (UARC) and Direct Action Everywhere staged several protests this summer outside of the Lagoon amusement park in Farmington, speaking out against what they allege is the park's mistreatment of zoo animals. After demonstrations over several Saturdays, coalition director Jeremy Beckham along with Lexie Levitt, Direct Action Everywhere organizer (and former City Weekly intern/freelance writer), were charged with class B misdemeanors for violating a city ordinance that made it illegal to "participate in any advanced, planned free-speech expression activity without first obtaining a permit for the event."

Representatives of UARC say they contacted the city of Farmington via email asking it to waive the $50 per-protest fee but were denied. The protests took place on a public sidewalk and did not obstruct automobile or foot traffic. The charges were later dropped.

After UARC and the American Civil Liberties Union of Utah sued Farmington City for violating the coalition's free-speech rights, the Farmington City Council repealed the $50 permit requirement on Sept. 15.

Every municipality is different, and permit laws are not identical. In Salt Lake City, for example, a $5 "Free Expression Permit" requires 30-days advance notice to process. However, according to the city's website, "Applications for spontaneous free expression activities, occurring due to some current event, can be submitted 14 or fewer days from event, to include day of."

"[It's] just meant to plan for the things the capital city deals with," she says.

Still, differences between the cities' laws can make the permit process especially difficult for protesters. A City Weekly reporter contacted 30 municipalities along the Wasatch Front to learn the requirements on protests involving 100 or fewer people who want to protest on public sidewalks or in parks without blocking auto or pedestrian traffic. Each city transferred the reporter, on average, between three and four times, usually shuffling calls between the city manager, parks & recreation, the mayor's office and eventually to the city police departments. Most of the calls ended up with the city's chief of police.

While "time, place and manner" restrictions on free speech are commonly applied, they must be applied without regard to the content of the speech. "When the government puts restrictions on free-speech activities, it needs to do so in a very narrowly tailored sort of way," says John Mejia, legal director of the ACLU of Utah. Two years ago, the ACLU of Utah successfully sued the Utah Department of Transportation for requiring protesters from the group iMatter to purchase a multimillion-dollar insurance policy and sign indemnification forms—in addition to paying the city for a Free Expression permit—before the group could march on State Street in Salt Lake City.

Three years ago, the ACLU also sued Brigham City over its permit requirement after the city refused to allow members of the Main Street Church of Brigham City to distribute religious fliers on public sidewalks at an open house prior to the dedication of the Brigham City LDS Temple.

But, according to activist Beckham, the problem with having to file a lawsuit every time a municipality requires a permit for free speech is that even the possibility of a potential misdemeanor is enough to scare away some protestors from participating. "There are other people who came to that protest besides Lexie and me who have now dropped completely out of the activist community," says Beckham. Often this is because employers enforce strict "no criminal charges" policies. "These people are now terrified that the police are going to track them down," Beckham says, to the point that some tried to have protest photos deleted from their social media.

Davis County Attorney Troy Rawlings says the charges never should have been filed in the first place. "I agree with them," says Rawlings. "[Beckham and Levitt] should not have been charged. It's a prosecution that should not have commenced. It's an ordinance that should be repealed, and it is unconstitutional."

Rawlings says that when he met with Farmington officials, he told them that there was no way they could win a legal challenge against the law, particularly because Farmington did not apply the law equally to all free-speech events. "They weren't requiring a permit for the Farmington Junior High cheerleaders out on the street waiving at people ... They didn't require a person dressed in a clown suit outside of a tax business to get a permit."

Are these Utah cities purposefully intending to infringe upon the free-speech rights of citizens? Most likely no, says Connor Boyack, head of the Libertas Institute, which is conducting a similar study regarding municipalities throughout Utah. "Farmington's rushed repeal of their protest permit requirement is an indication that such ordinances are not well thought-out," says Boyack. "Hopefully, Farmington's fix will be replicated elsewhere."