3 Generations loses one distinct voice by listening to several others. 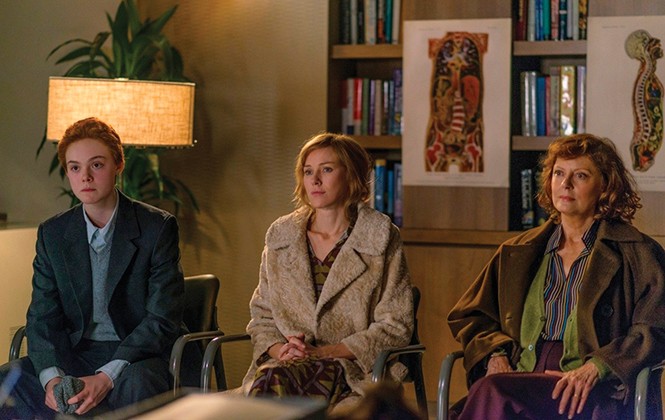 More than 18 months ago, when co-writer/director Gaby Dellal's 3 Generations premiered at the 2015 Toronto Film Festival, it wasn't 3 Generations. It was About Ray, a drama centered around a New York teenager's transition from female to male. The long gestation from festival to U.S. theatrical release, accompanied by a title change, suggests the whiff of failure—and indeed, the movie formerly known as About Ray did not earn critical hosannas in Toronto.

So how did a movie with a killer starring cast of Naomi Watts, Elle Fanning and Susan Sarandon, dealing with a particularly of-the-moment subject, become such a castoff that its distributor thought it was better to avoid any reference to that long-ago premiere?

That's not an easy question, nor does 3 Generations entirely deserve its status as prestige-pic-turned-pariah. The story begins with 16-year-old Ray (Fanning) already well into his transformation from the girl born as Ramona, and living with his single mother Maggie (Watts), his grandmother Dodo (Sarandon), and Dodo's long-time life partner Frances (Linda Emond). The next step is beginning hormone therapy, for which Ray, a minor, requires parental consent. That means not just Maggie's consent, but that of Ray's long-absent father, Craig (Tate Donovan)—though Maggie herself is struggling with the decision.

At the heart of the narrative is a fairly compelling idea anchored in this unconventional family structure. Dodo might have raised Maggie with another woman, and Maggie might have raised Ray never having married Craig, but this group of New York artsy intellectuals still doesn't know quite how to process Ray's gender identity. Dodo, in particular, is openly opposed to allowing Ray to begin hormone therapy, leading Ray to quip, "For a lesbian, you're pretty judgmental." That dynamic gives 3 Generations a kick that might not have been there in a story where Ray's family was made up either of angry conservatives or blissfully supportive liberals. What do you do when your theoretical open-mindedness collides with the reality of your own child's life?

Watts turns in a performance that's engrossingly uneasy, serving up some great emotional moments—wistfully looking through photos of Ray at a time when it all seemed easier (at least for Maggie), or watching Ray bounce joyfully on a bed in a way that reminds Maggie of the carefree child he used to be. There are equally effective scenes as Maggie sees Craig now enjoying the kind of blissfully "normal" nuclear family she never experienced. Few movies have wrestled honestly with the way even well-intentioned loved ones can feel grief over a gender transition—the superb French-Canadian drama Laurence Anyways being a rare exception—and 3 Generations has the generosity not to judge Maggie when she worries about Ray's future happiness with a tearful "Who will love him?"

It would have been a risky move to make 3 Generations entirely about the way the family copes with Ray's transition, but it would have been a better choice than what Dellal and co-writer Nikole Beckwith offer. They spend a fair amount of time on the everyday challenges of Ray's life—missing part of school to run across the street to a coffee shop's gender-neutral bathroom, binding his breasts with ace bandages, facing bullies—in a way that's honest without ever feeling melodramatic. But as talented as Fanning is, the low-key approach to Ray's own experience makes that part of the story feel like an afterthought, as though the filmmakers knew they were obliged to give us Ray's point of view even if Maggie's made for the more unique and thoughtful story.

The story gets even more convoluted as 3 Generations gradually unfolds the history of Maggie's split with Craig, and begins to seem resolute about delivering the most unusual blended family photo possible. Yet in their determination to give everyone a voice, Dellal and Beckwith never allow any one voice to become distinct. As it turns out, 3 Generations seems like the title the movie should have had all along, and part of why it felt unsatisfying to audiences 18 months ago. It was never really entirely about Ray, and maybe it still ended up being too much about Ray.