A Salt Lake City restaurant stands the test of time. 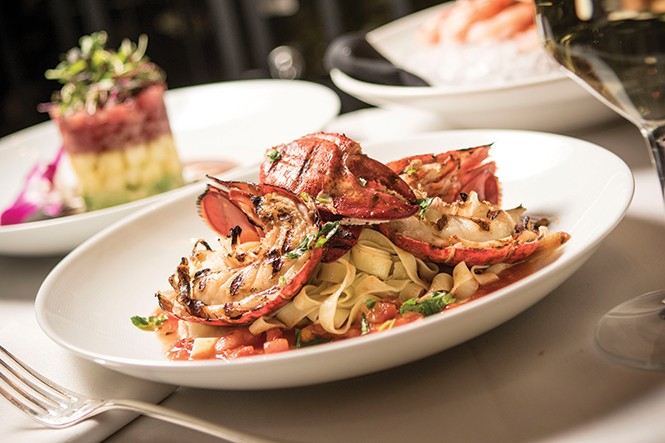 It's a pity that the venerable New Yorker restaurant—one of Salt Lake City's most enduring and endearing—isn't open on Sundays, because it would be an ideal spot to celebrate Valentine's Day. But, of course, you could call on Cupid early by dining there on Friday or Saturday night during Valentine's weekend.

The New Yorker is the type of restaurant—one of the few left standing—that makes you want to show up in a suit and tie, or at least a sport jacket. It's an eatery to which the term "fine dining" still applies, as restaurants in general become more and more casual. Not that there's a dress code. You could show up for dinner at the New Yorker in cargo shorts and a T-shirt, but you shouldn't. This is a place where manners and service still matter, from the high-heeled hostess who warmly seats you to the general manager and servers.

A bit of history: Originally built as the 75-room New York Hotel in 1906, the deteriorating building was renovated and remodeled during the mid-1970s and opened as the New Yorker restaurant in 1978 by partners John Williams and the late Tom Sieg. A couple years later, Tom Guinney would join the partnership and help to open the Market Street Grill in the same building.

Since its inception, the New Yorker has been known for its blend of art deco and contemporary décor and ambiance. Williams, Sieg and Guinney always turned to local artists for the unique and original art that hangs in their restaurants, and I was touched to see a colorful portrait of Sieg, who died in 2008, hanging at the bar, in front of the seat he seemingly always occupied, serving as an amiable host to guests old and new.

There is nothing cutting-edge about the New Yorker. You won't find blistered shishito peppers or pork belly on the menu. What you will find is classic cuisine with a continental leaning and contemporary flair. Executive chef Will Pliler, now also a partner in the New Yorker, has been at the helm in the kitchen for as long as I can remember. And, also for as long as I can remember, I've never had a bad meal there. He might not get the press and accolades that some of his younger counterparts do, but Pliler is as solid as they come.

So, consider kicking off a meal at the New Yorker with a terrine of housemade chicken liver paté ($14), accompanied by a generous helping of 10 grilled French bread slices—it's enough to feed a crowd. The paté is silky and smooth but also dark and rich, served with a sweet and tangy wild huckleberry sauce. We didn't want to fill up on it, delicious as it was, so we had a few bites and took the rest home. We always enjoy Chef Pliler's perfectly cooked and crispy fried calamari ($16) with Asian slaw and sweet chile sauce, but a new starter on the menu is also enticing: fresh burrata prosciutto with arugula, balsamic vinegar reduction and a grilled baguette ($14).

While the aforementioned items are designed for sharing, I'm stingy with regular appetizers like the crock of onion soup gratinée ($10), made with Swiss and Parmesan cheeses, and even more protective of my single favorite starter: the ahi tuna, mango and avocado "tower," which is drizzled with a lovely sesame vinaigrette, along with chive oil and micro greens ($18). If you're in the mood for something truly classic—and which I'd bet has been on the New Yorker menu since the day it opened—go with the jumbo shrimp cocktail made with housemade horseradish sauce ($18).

I love that Chef Pliler isn't averse to putting dishes on his menu that could be considered a hard sell. To wit, one of the best things I ever tasted was his braised Sonoma rabbit with capers and Meyer lemon sauce. But it wasn't very popular because, apparently, a lot of folks eschew eating bunnies. He's also had sweetbreads on the menu a few times, another item that's a bit hard to move among Utah diners. Still, you will find Venetian-style veal liver and sautéed onion and creamy polenta ($28) on the menu, a favorite especially with some of the New Yorker's old timers.

The grilled Maine lobster fettuccine ($38) is my go-to New Yorker dish, but this time I couldn't resist the Long Island duck confit ($34). Pliler slowly cooks it in duck fat, garlic, salt and thyme, rendering it crispy and rich. The half-duck portion is served with wild rice and huckleberry sauce and is divine. Still, my wife's ono entrée was even better. Ono is a firm-fleshed fish, and the large, thick filet was cooked to perfection—flaky and tender, served with minced tomato, fresh corn kernels, fava beans, zucchini, onion and micro greens ($34).

The New Yorker might not be the newest kid on the block anymore, but it is aging gracefully. And, with Will Pliler running the show, it's still a spot to enjoy some of the best cooking in town.