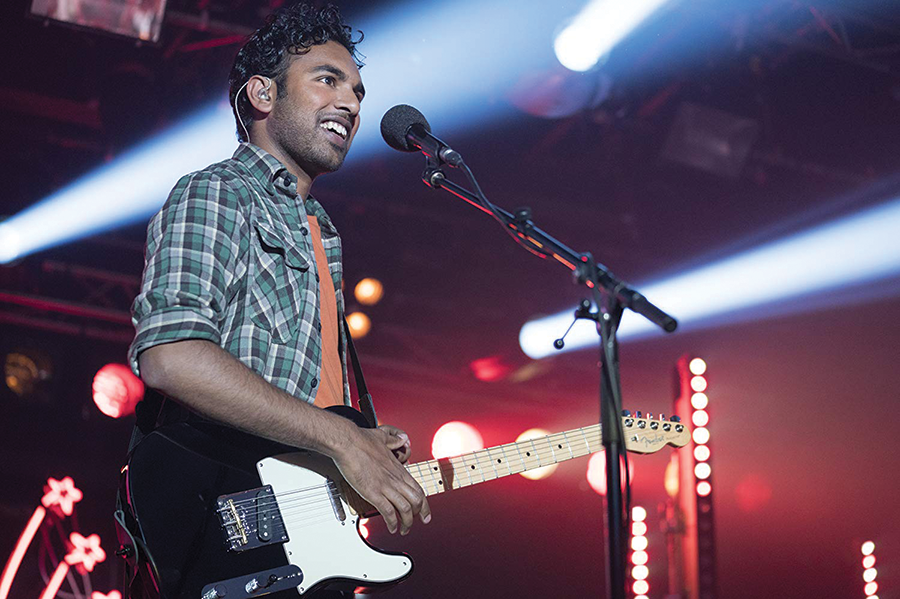 Imagine there's no Beatles. It's easy if you try—at least according to the inexcusably lazy comedy Yesterday, which proposes that, absent the incalculably enormous impact theBeatles have had on not just music and pop culture, but upon culture itself, the world would nevertheless look exactly as it does today. Which seems impossiblyunlikely, and also feels like a huge insult to the Fab Four.

The unexplained high-concept here: One night there is a momentary worldwide electrical blackout that lasts for only a few minutes, during which struggling singer-songwriter Jack Malik (Himesh Patel) is hit by a bus and knocked unconscious. After he wakes up, he slowly comes to the realization that he's the only person who knowsabout The Beatles and their music. He discovers this only because he starts playing "Yesterday" on his guitar, and his friends—including his manager, Ellie Appleton (LilyJames)—think it's a new song that Jack himself has written. Google confirms it: There has never been any such band as The Beatles. Has Jack somehow slipped into analternate universe? Is God a Rolling Stones fan (they still exist here) Who used the blackout to erase all evidence of The Beatles from history and from everyone'smemory?

Whichever the case—and it really doesn't matter—it's just an excuse to tell yet another story about a not-very-talented guy who enjoys unwarranted success. Jackgoes on to "write" and record all The Beatles songs, which turns him into a global phenomenon, because, of course, the songs are terrific—to our ears, in the culturalcontext of 50-plus years of history in which we know them. Would "I Want to Hold Your Hand" really have the same impact, brand-new, in 2019 as it did in 1964? How would "Eleanor Rigby" or"Let It Be" land today? The Beatles' songs exist in a bizarre vacuum here, literally excised from the social and artistic environment in which they were written, performed and received. Songs like these, like all of The Beatles' work, are so much of their moment in time—which, of course, is part of how and why they endure—yet there's no sense of that in Yesterday. These songs would surely sound odd, anachronistic, maybe even random if they were presented as though created now.

Perhaps the weirdest thing about Yesterday is that it isn't even an excuse for a revue of Beatles music, like those Mamma Mia!-style jukebox musicals from Broadway, the West End, and now, movies. Only a few of the songs are actually performed in anything close to their entirety. It's all mostly just a one-noterunning joke about how no one except Jack knows all those famous lyrics and tunes, combined with a blah romance. Ellie is naturally in love with the obliviousJack, and now is losing him to fame and fortune.

Patel, an Indian-British TV actor making his feature debut here, is charming enough (and, small favors, at least it's notanother white guy sailing to unearned adoration). But Yesterday is, at its very best, inoffensive to the point of blandness; even Kate McKinnon, in a small part as aBig Music shark who latches onto Jack, only briefly brings some spark to the screen. At its worst ... well, there's a moment toward the end of the film that is so cheaplymanipulative that it feels like a punch in the gut, and not in any good way, leaving a sour taint over the whole endeavor.

I'm sure director Danny Boyle and screenwriters Richard Curtis (Love Actually) and Jack Barth imagined they were paying tribute to what is probably the greatest band in the history ofrock 'n' roll—and maybe some of the most profoundly influential people ever—with this movie. It's replete with their songs (or snippetreminders of them) and with a whole planet of 21st-century people newly discovering them and going crazy for them. But it utterly defangs the music we know and loveso well, diminishes its significance and the meaning it has for so many of us. And ultimately, Yesterday very clearly says that if you took The Beatles away, nothingwould be different and no one would even notice.