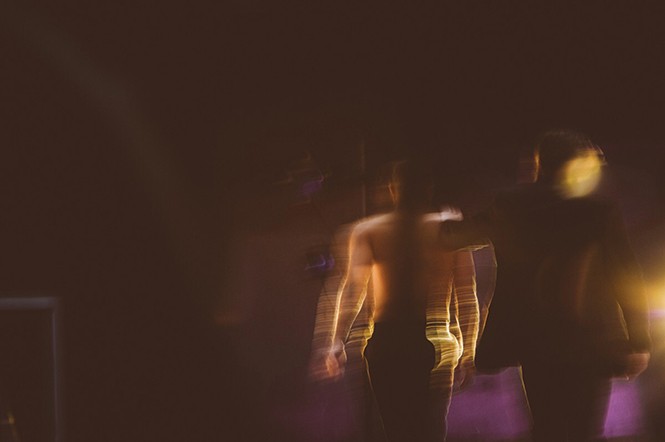 "I like the idea that committing to a place is like committing to a human relationship," says Charlotte Boye-Christensen, choreographer and founder of the contemporary dance and design company Now-ID. As we talk, off to one side of the studio, three slight yet muscular dancers take a break from the rehearsal of Nowhere, Boye-Christensen's latest work, which examines our sense of place and belonging. "You have to give over emotionally," Boye-Christensen continues, "and allow, at times, to be guided in decisions by a place."

Christensen's life has been guided and defined by many places. At the age of 17, she left her native Denmark and spent the next decade and a half in noncommittal relationships with large cities around the world: She studied in London and New York, visited and worked in Singapore and Mexico City. When an offer came, in 2002, to move to Salt Lake City and become assistant artistic director of Ririe-Woodbury, she hesitated. The place seemed provincial, small and isolated. But she took the job, committing only to a one-year contract.

Thirteen years later—even after stepping down as Ririe-Woodbury's artistic director in 2013 and starting her own company—Boye-Christensen is still here. Salt Lake City is home. "I fell in love with the landscape and people, the artists," she explains. "This place helped me develop a unique perspective on art in general and on nature and how you bring nature into your life."

Now, with Nowhere—a site-specific and collaborative art performance set at Libby Gardner Concert Hall—Boye-Christensen hopes to guide audiences thought a carefully curated sensory exploration of their own complex relationship with place, a part of the human experience and identity that she sees as at once universal and also very personal. In addition to her own choreography, Nowhere includes the work of architect and Now-ID executive director Nathan Webster (Canada), organist Laura Cutler, composer Steingrimur Rohloff (Iceland), musician and composer Jesper Egelund (Denmark), lighting designer Cole Adams, and artist and CUAC contemporary art gallery director Adam Bateman.

Bateman, who's currently working on his own performance-art piece—re-imagining the myth and the place called the American West by walking the pioneer path of his Mormon ancestors—recently received a visit from Boye-Christensen. Somewhere west of Cheyenne, Wyo., on a dirt road labeled "Brigham Young 1847," she shot footage of Bateman on the lonesome high desert—a place of grass and sagebrush, a place, Bateman says, where you can see forever.

After filming Bateman in what Boye-Christensen describes as "that natural context where his needs were really practical"—the need for water and shelter—she brought the footage home, and is now working on inserting it, along with all the other components of sound, light and space, into the performance. Inside the "unnatural created context" of the concert hall, Bateman will become a symbol of man's relationship with place, and the video, a method through which the audience may contemplate the places in which they find themselves.

"One thing we talked about early on," recalls Bateman, "was having the audience move in specific ways through the venue. We saw this walk as a dance the audience would perform, and moving through the hallways as being on a trail."

And so, Libby Gardner Concert Hall—the hallways, the seats, the doors, the foyer—will become the final integral component in this exploration of place. As a site-specific dance, Nowhere responds to the architecture of the hall and inhabits it in a way that makes transporting the same performance to another space impossible. Trisha Brown, one of the first choreographers to create site-specific work in the 1970s, is most remembered for her piece Man Walking Down the Side of a Building, which sent a dancer walking seven stories down the face of a New York City apartment building rigged to mountaineering equipment.

Since then, site-specific dances have been performed on ships and bridges; in hotels, jail cells, hospitals and government halls; in subway terminals and on baseball diamonds. Each work uses place and architecture to advance an idea. "By moving the audience through [the hall's] architecture in unconventional ways," explains Bateman, "we can make [our audience] conscious of and contemplate their immediate relationship to place."

Back at the rehearsal studio, where director and dancers have been hard at work for the past nine hours, it's time to wrap up the day. But first, Boye-Christensen wants one last run of the duet. "I wanted the emotional energy of this piece to continually shift," explains Boye-Christensen. "It gets us back into this idea of push and pull. What do you want your identity to be in terms of where you are?"

Two dancers, close but not yet touching, position themselves in the center of the space. She moves first; he moves only when she pushes him into motion. Their two bodies become almost inseparable in the shifting play between power and intimacy. Finally, crouched side by side, her arms form a circle. He threads his body into it. Together, energetically and physically, they end inhabiting the same place.