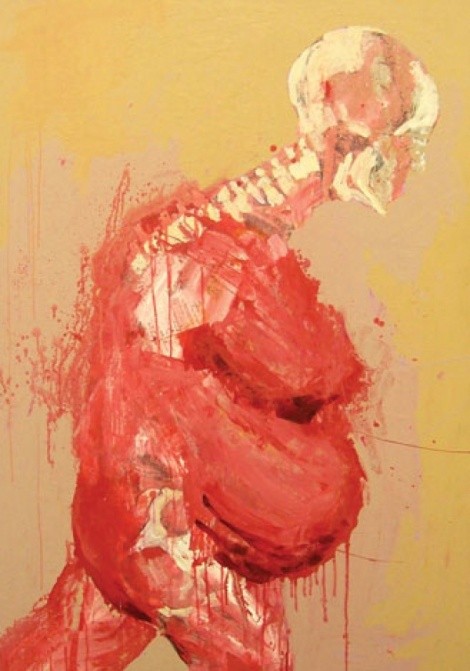 The Nox Contemporary Gallery, huddled amid a row of offices on 400 South, is more than what initially meets the eye. Once you peruse its space, it’s apparent this newcomer on the local gallery scene might add something profound to the artistic environment. The location, leased from the Fourth Street Clinic, is unconventional but, on the edge of the Pierpont gallery district, it’s a prime location for art.

It’s also about more than just location, since gallery co-owner John Sproul has a deep and abiding interest in the local arts scene. Originally from Los Angeles, he studied at the University of Utah and enjoyed his interaction with the local arts community then. He relocated back to Salt Lake City with his wife, Emily Plewe—who is also gallery co-owner and an artist—seven years ago, and they look to be a vital part of the local art vibe.

Sproul operates an eBay business in the back of the gallery to support it financially, and hopes to eventually seek out national collectors who might have interest in these local artists. “Nox Contemporary aims to increase exposure and further connect Salt Lake City to the global contemporary-art dialogue,” he says, and that includes showing national and international names.

Sproul and Plewe could probably make names for themselves anywhere. Sproul has shown at the Getty Museum in Los Angeles. “One of the most important and fulfilling aspects of art is the community that it creates,” Sproul said, and Salt Lake City has a kind of arts community that he couldn’t find in SoCal.
Plewe, meanwhile, was featured in 2009’s City Weekly City Guide under “25 Bright Spots—How To Start Your Own Accidental Love Affair With Art.” She also participated in the “Face Off” show at the Urban Gallery, sponsored by the 337 Project, which pitted teams of artists against each other painting garage doors. Her mixed-media work fuses textual elements into their surfaces to take the viewer on fascinating visual pathways. “There are some really exciting things happening here right now.” Plewe says. “Nox Contemporary will build on that momentum.”

Sproul’s paintings in the gallery’s debut show Prime—expressionistic figures like the one in “It’s Not Me It’s You”—are both a bit clownish and monstrous, yet his sketches in the show also show a remarkable delicacy and compositional finesse. The figures in Tyler Spurgeon’s oils—“Walking” is pictured—convey a dynamic energy. “His stuff is really raw,” observes Sproul. “He puts a lot of himself into the work.”

Jenn Harmon Allen’s plaster-of-Paris dress sculptures “speak to the female position in society,” says Sproul. Tom Aaron’s paintings, including “Bend,” resemble convoluted cityscapes seen from above. A different version of Shawn Porter’s “not titled” sculpture was seen at Garfo last fall, constructed of wicker branches tied to the ceiling and concrete balls arrayed on the floor. Sproul hopes the 1,800-square-foot space at Nox will provide opportunities for installations and video pieces that previously haven’t had much of a venue in town.

Shows slated for 2011 at Nox include a drawing show put together by Plewe in which artists will be given oversize pencils and erasers to create work on site, viewers able to observe the genesis of the works in progress. Later in 2011, a solo installation by local artist Jared Steffensen is scheduled.

Plewe and Sproul come to the gallery with a history of not only being artists but as advocates for the arts and artists. The Utah Foster Art Program was founded by Sproul in August 2009, and through that he found that “a lot of artists aren’t being shown,” which gave him impetus to create Nox. UFAP lends pieces of art to local individuals and businesses, to help expose viewers to art they otherwise might not choose to experience in their own environments, as well as exposing artists to a larger audience. More than 100 local community members and businesses have participated. A member of the Utah Museum of Fine Arts Young Benefactors council, he doesn’t just give lip service to the local arts community as a gallery owner, but does a lot to try to support it. The Foster Art Program is something he does on his own time without any financial or institutional support.

Sproul also hosts art discussions at his home/studio, to engage with other local artists and provide an opportunity for artists to learn about one another’s creative processes. He says, “The conversation that’s been taking place (in the artistic community) is about Salt Lake pushing forward, to be up with the rest of the country.” This first opening at Nox Contemporary shows a group of locals who are just that: utterly contemporary and as progressive as you would find anywhere.