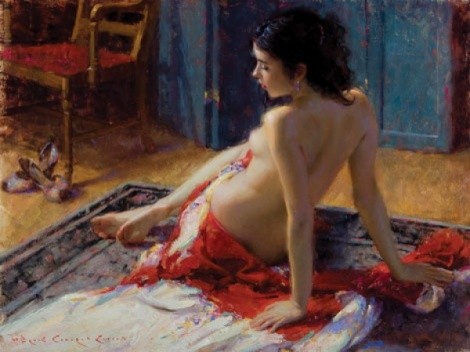 “I opened the front door to a painting and I was looking right at a pair of breasts ... they were too intimidating,” laughs gallery owner Michael Berry, remembering the follies of figurative art when curating a private show. Berry, not shy about nude works, displayed figurative artists Jake Reese and Dan Baxter at his gallery last spring. “I was trying to show the artists themselves. I wasn’t trying to expose the market of nude art,” Berry says.

Garfo Art Center’s current exhibit, Containment (through Sept. 10), has several figurative pieces, but otherwise, art lovers are hard-pressed to find this form in town. Garfo curator and City Weekly contributor Cara Despain says it’s because of factors beyond Utah’s conservative culture. There’s a diminished contemporary art pool stemming from an atypical gallery culture compared to other mid-sized cities, Despain says. “And, more than shocking, [figurative painting] can be played out because of academic usage, and it’s just a subject that’s been painted for thousands of years, again and again.” She further says that while it might feel outdated, when artists push boundaries emotionally or contextually, they can break through the cannon.

Though artistically captivating, Jake Reese’s figurative collages—painting, pastels and sand—of nude men and women surprised many viewers. Reese’s inclination is that this speaks to Utah’s conservative culture: “Even for those that don’t consider themselves conservative, it’s a residual feeling that then reverberates out.” The corollary: self-censorship, to certain extents. Reese says artists continue to produce the work, but choose not to present it to galleries, who, in turn, also censor because of the lack of demand for the art, which is popular in other Western cities such as Denver, San Francisco, Portland or Los Angeles. “Here, we sell landscapes and modern art,” Reese says. 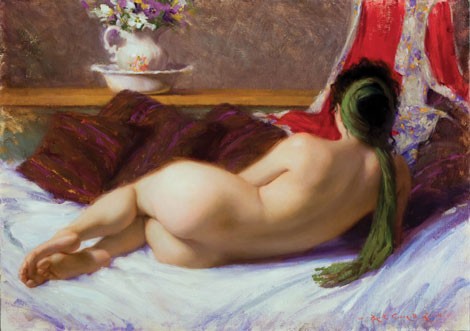 His draped nudes sell best because of the commonplace sentiment that people can’t hang nipples on their wall, he says. However, he hasn’t shifted to covering things up for commercial success. “It feels incomplete. Part of me thinks people should be challenging themselves. Everybody’s naked underneath their clothes,” Reese says.

Local painter Bryce Liston and friends have coined the term “Utah nudes” that “don’t show any naughty bits and are generally depicted from the back or are very subtle.” Liston is able to make a living selling strictly figurative art, and, surprisingly, his collectors are largely women or wives of collectors purchasing nude women, especially if they’re posed looking away. “Perhaps they transpose themselves onto the body,” says Liston, who, by necessity, sells mainly outside of Utah. He says he’s forced to self-censor nationwide, but even more so in Utah. “I’m trying to make a mortgage payment; however, at times, I’d like to be a little more bold. It’s a fine line,” Liston says.

Photographer Dennis Mecham believes local artists don’t self-censor and the city’s conservative view of nude art isn’t worse than other American cities. “America is far behind Europe. People just don’t understand the difference between nudity and pornography,” he says, reasoning that it’s our foundational puritanical views. “What makes an image work in art, whether nude or not, is its sense of mystery or how it addresses the spirit—the formless behind the form. In pornography, it’s just pure, physical and raw,” says Mecham, who’s done more nude art than most photographers, mainly because it has continuously inspired him. For Mecham, art triggers curiosity and introspection. “Maybe people are made uncomfortable because they don’t want to hear the questions,” Mecham says. He sells his nudes—approximately 50 percent of his total collection—mainly in California or online, but rarely in Utah.

“Sex sells everything except art,” says Adrienne Winter, Phillips Gallery framing and sales employee and figurative painter of commissioned-based nudes. “The only way I’ve gotten nude models is when a woman is pregnant. When their body changes, so does the idea that they don’t have to be perfect,” Winter says. It’s a hard business, let alone conversation, to broach, but she thinks that people inherently want to accept beauty in nakedness, nude painting and photography.

Still, in reality, nude art offends some. When Phillips Gallery sent a standard informative mailer in 2009 with a reprint of Francis Zimbeaux’s “Figure by the Water,” with subtle black lines outlining a nude form, though not blatant or sexual, it offended several customers who asked to be removed from the mailing list.

For Winter, nude art is infinitely relatable and continues throughout people’s lives to deliver a message that’s impossible to receive from landscapes or still life works. She wishes there were more opportunities to view here. “To lose our ability to see and feel these messages would be huge loss to humanity.”