Nude Photography—But Not What You Think 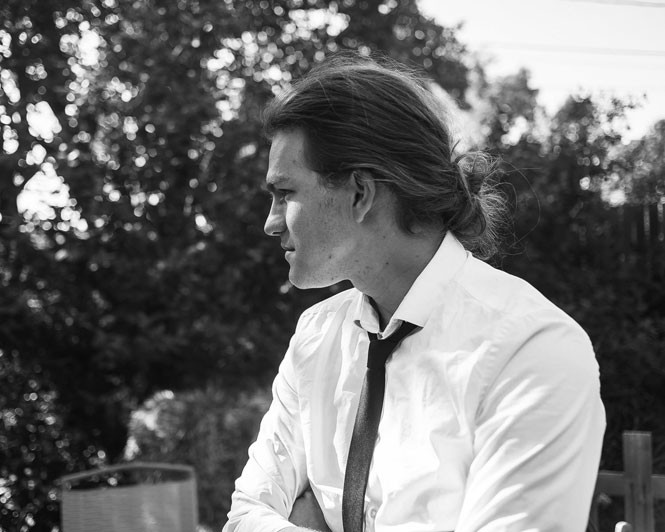 When you hear the term "nude portrait," you expect it to be an explicit image of a nude subject. Provo native Trevor Christensen is flipping this idea on its head with a series of nude portraits where he, the photographer, is naked during the photo shoots and the subjects are clothed. View more photos by following Christensen on Instagram at @trevorchristensen.

Where did you come up with the idea to take photos while nude?
It started out as a joke, like, "Wouldn't it be funny for the photographer to be naked instead of the subject of the photo?" Then it kind of morphed into this idea of vulnerability and how the power is inherently in the photographer. I thought by [me] being naked, they would feel less vulnerable and more open, but I've noticed that even though I'm the one who is nude, a lot of the subjects are still very nervous about having their picture taken. So, in the sense of trying to shift the balance of power, the project has honestly been a failure.

What's the process for one of your naked photo sessions?
It's stressful, man. There always a moment when I'm getting undressed and I think to myself, "What am I doing?" It's kind of interesting when someone is chill about it, because some people never stop freaking out or quit being nervous. But everyone knows I'm going to be naked—the last thing I want to do is freak someone out or make them feel unsafe or uncomfortable.

A shoot usually lasts about 45 minutes, and it is super low key. It's usually at their house, and I go into the next room to get undressed, then walk out and take about 350 pictures per shoot. We talk during the shoot and, honestly, it brings me closer to the subjects. Afterward, they are in a whole different category of people for me. They're in my "naked spot."

What was it like doing a shoot with members of the band Fictionist?
The Fictionist shoot was kind of a gimmicky thing. A wife of one of the band members told them about my interest in having them do a shot for the series. I went over to shoot the cover for their new album, which will be released in October, and then they decided to be involved in the nude portrait series. Their shoot only lasted about 10 minutes. I think I knew two or three of the members before the photo shoot, but after an experience like this, I feel a lot closer to all of them.

Are there any celebrities you dream of shooting while nude?
There's a list a mile long of people I want to shoot for the series. Hillary Clinton would probably be my first choice. I'd do anything for that opportunity, so if you know her, tell her to give me a call.

Have you been surprised by anything that's come about through these nude portraits?
It's fun going viral, but I never expected it. My Instagram had about 5,000 followers before the series went online, and now I'm almost double that. Some of the pictures you can tell the subjects are really shocked, but in others you would never be able to tell the photographer is nude. I'm a photojournalist, so this is kind of out of my normal scope and I don't want to be known as "the nude artist"—but I mean, art is cool, man.

What are your future plans for this project?
This is a long-term project. I will probably continue it for a few years, and I would like 150 photographs in the series, and then narrow it down about 50 percent, so about 75 portraits make it into the final body of work. I would like to travel across the country to places like Harlem, and anywhere in Texas, and get more diverse shots, like little old ladies. I'll spend some time nursing the project and branch out a little bit so it's not just a cross-section of my hipster friends from Provo. I'm a straight white male in his 20s, and I want people who aren't like me.