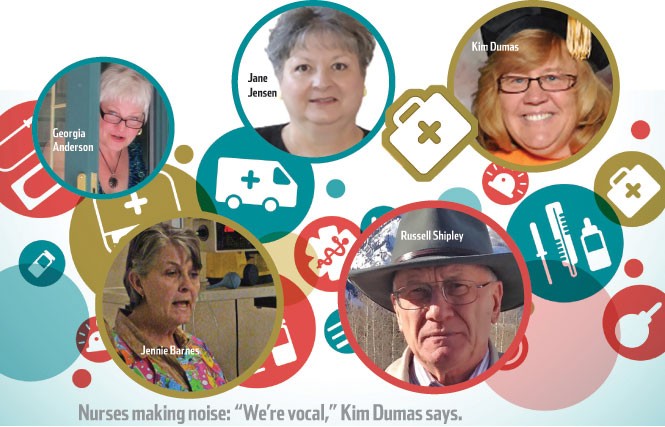 The nine Salt Lake Community College nursing instructors who gathered in the American Federation of Teachers union hall in Midvale in December were not there for the free coffee.

For nearly all of those at the table, the preceding four months had led them to either retire early or quit. This exodus now numbers 13 faculty and staff members, many of them tenured, accounting for a large portion of the full-time nursing-school staff at what is one of the largest nursing schools in the state.

Around and around the complaints flew. Nurses with two decades of teaching chops—along with those just starting down the path—rattled off an array of circumstances and problems that led them to walk away from their jobs. And at the epicenter of their complaints is the nursing school's interim associate dean, Francine Weiss.

"When you have more than three-quarters of your full-time seasoned faculty members, many of whom have been there for over 15 years, saying 'This is intolerable,' there is something terribly, terribly wrong, and we cannot keep going like this," says Jane Jensen, a nine-year veteran nursing instructor who, along with longtime faculty members Georgia Anderson and Jennie Barnes, retired early at the conclusion of the fall 2014 semester. "The program is suffering, the students are suffering and the faculty is suffering. Nobody has taken us seriously."

Problems with the inner gears of the nursing program have included an outdated curriculum and a dip to 74 percent proficiency in 2013 (85 percent is the school's goal) on the national licensing exam, which all nurses must pass. These problems and others were cited by administrators prior to Weiss' hiring in fall 2014.

And, although she confirmed that 13 faculty and staff members have left the school either during, or shortly before her tenure began, Weiss says this flight isn't unusual.

"I've seen that before," Weiss says of the faculty departures. "Staff comes and goes. We have turnover in staff."

Kim Dumas, who resigned because of the working conditions under Weiss, says that in her 10 years at the school, only two faculty members left.

Weiss says the problems facing the program were caused by the faculty, not the administration.

But Dumas says Weiss changed the times and dates of classes, shuffled membership on various staff committees, and arbitrarily disciplined faculty members, all factors that led Dumas and others to quit their jobs.

Since Weiss had taken the reins of the program, her critics say, a culture of disrespect for the faculty permeated the nursing school. When instructors tried to engage Weiss in meetings and via e-mail, they say no reply was sent, or that meetings with Weiss were abruptly ended.

Weiss denies that she was ever unresponsive, saying regular faculty meetings were held and she did everything she could to respond to the needs of her faculty. "That's not true," she says. "They absolutely have been listened to."

But former instructors say it was a lack of communication that caused alterations in how the school interfaced with hospitals, and ultimately, prompted instructors to walk away from their jobs.


Russell Shipley, a nursing instructor at the school for the past six years, says he looked on as Weiss ignored his and his colleagues' suggestions and arbitrarily punished them. It got to the point, Shipley says, that he had to quit, if for no other reason than to prevent his name from being associated with the college.

Shipley began his resignation letter, dated Dec. 22, 2014—which was sent to Weiss and Clifton Sanders, interim provost of academic affairs—this way: "Congratulations!!! One more name to check off your list."

"Now, I am ashamed to have my name associated with SLCC," Shipley wrote. "Throughout the fall semester of 2014, I, along with many other faculty in the Department of Nursing, have endured harassment from the administration. We have endured manipulation of the truth and at times outright lies regarding faculty interactions.

"To remain at SLCC would require that I either lower my ethical standards and compromise my integrity, or, come to work every day wondering if this is the day I will be wrongly accused and persecuted."

Citing rules regarding personnel confidentiality, Joy Tlou, an SLCC spokesman, declined to comment on any of the specifics behind faculty departures.

Over the course of multiple interviews, Tlou did admit the school has had difficulty with certain nursing faculty members. And he points to a document, called a Notice of Concern, written in April 2014 by former Provost Christopher Picard. The letter outlined a string of issues facing the nursing program. They range from a high number of student complaints about poor teaching, to concerns that the nursing curriculum was outdated, to nursing staff not treating each other, or their superiors, with respect.

And, though Tlou declined to mention names, he says some of these issues were caused by nurses who recently departed. "This letter was describing conditions that, according to the provost, according to the college leadership, already existed," Tlou says, noting that the letter was written prior to Weiss being hired. "I suspect those conditions were created by those very people who are complaining now."

But it is broad finger-pointing like this that irks some of the former instructors, who were well aware of the letter and its concerns. Dumas says some of the concerns stated in the letter are real, but that punishing 20 faculty members isn't the right way to solve the problems.

By sheer faculty size and length of tenure, the nursing program, Dumas says, is large. And with around 500 students enrolled each semester, SLCC students often make up the largest number of students from schools in Utah taking the national licensing exam.

Since nurses are taught to question when things are amiss, Dumas says she and her colleagues weren't afraid to make noise. "We're vocal, and we're a lot more than people are used to dealing with," Dumas says, noting that she believed part of the motivation for the notice of concern was a blunt way to ask the nurses to stop bugging the administration. "If there's a problem, yeah, it's going to be a bigger voice coming from nursing. That's just how it was."

Any problems the program was saddled with prior to Weiss' arrival, however, worsened quickly once she arrived, the former nursing instructors say.

One of the points outlined in the Notice of Concern regards the quality of the school's curriculum. According to Dumas, Shipley and other instructors, efforts were afoot to reboot the curriculum, but when Weiss took over, faculty was shut out of the process.

For her doctorate thesis, Dumas, who finished her degree in May, wrote a new curriculum she hoped to introduce at the college. But she and her colleagues, she says, weren't listened to. "Francine just started randomly changing things," she says. "The days the classes were on, what you could teach ... everything just kind of started coming apart."

Weiss says instructors were told to make a list of the courses they wished to teach, but some did not make their lists. And she says changes to curriculum were handled through faculty-led committees.

Former nursing instructors, including Dumas, say they were also concerned about Weiss' past. In 2009, Weiss admitted to the Utah Department of Commerce Division of Occupational and Professional Licensing that she sold and dispensed a hormone called human chorionic gonadotropin (hCG). This hormone, which is created naturally by women during pregnancy, is sometimes dispensed to help with infertility and weight loss. In Utah, sales of the drug require a prescription, and Weiss wasn't licensed to dispense or sell any prescription-only drugs.

On her error, Weiss points out that her license remains intact; she paid a $2,500 fine and was reprimanded. "There was never any restrictions on my license, there's not now," she says. "It was a long time ago, that's really all I can say."

When she found out about Weiss' transgression, Dumas says she was surprised she had been put in charge of a program that each year trains hundreds of new nurses. "If a nurse breaks the law, or the ethical code of nurses, she should not be in charge of a program where new nurses are learning the importance of trust and ethical behavior," Dumas says.

Judy Scott, a former associate dean of the SLCC nursing program who is now an assistant professor for nursing at Dixie State University in St. George, says she left the school in early 2014 after 3 1/2 years when her contract wasn't renewed.

The lack of renewal, Scott suspects, stemmed from her unwillingness to issue a blanket reprimand to the nursing faculty. Scott says this directive came from former Provost Christopher Picard, who also wrote the Notice of Concern. Scott says Picard was understandably upset about a low passage rate on the national licensing exam, as well as the attitudes of a few faculty members. But both of these issues, Scott says, were being dealt with appropriately.

We Have to Change With the Times


Shortly after Weiss took over, 14 nursing instructors and staff, eager for some form of protection, joined the America Federation of Teachers (AFT) union.

Brad Asay, the union president, says he's raced out to the nursing school on five different occasions, only to be shut out of disciplinary meetings involving union members. Greeting him and the other nurses who waited outside the door to hear the fate of their colleagues, were Utah Highway Patrol (UHP) officers—a presence many of the nurses say they found intimidating.

Asay called the scene "the most hostile working environment that I have dealt with as a union president."

Tlou, the school's spokesman, says the school has a contract with UHP to provide security at the school. He knows of only one time the UHP was called to a nursing faculty meeting, and this was done "because of abusive and threatening behavior on the part of the people that were present."

Despite the flight of faculty members, one resignation in particular seemed to bother the administration—that of Shipley.

After sending in his resignation letter, Shipley was contacted by interim Provost Sanders, asking if he could persuade Shipley to stay on at the college. Shipley says he met with Sanders but was unconvinced that the "toxic work environment" and "questionable ethics and integrity and bullying tactics" that he cited in his resignation letter would cease.

Two new faculty members given full-time instructor jobs just before the current semester began, who say they were asked by Weiss to contact City Weekly, say it was the recently departed faculty, not Weiss, who created a combative work environment.

Another faculty member, Debbe Schuster, director of the nursing arts lab who has worked in the nursing program since 2011, says Weiss has simply tried to implement needed changes to the program, but much of the faculty has resisted. "We have to change with the times," she says.

There is little doubt that the nursing program has changed. Scott, the former dean of the nursing program, says that on more than one occasion, she had her hands full with the outspoken nursing staff. But she says cooler heads prevailed and most of the staff, under her watch, stayed on.

It didn't turn out this way for Weiss, who in spite of losing 13 faculty and staff members, insists the program is on the right track. "I think this faculty is happy, there are amazing things that are happening, I think students are learning more than they've ever learned before," Weiss says.

From her distant perch, though, Scott says she isn't so sure.