If the North Pole is too far, visit these festive places. 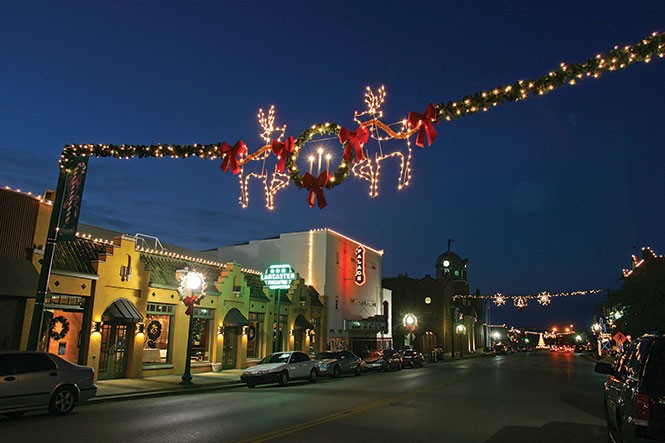 There are places in the American West where the goal of Christmas is not just to make things merry and bright, but also to turn the entire month of December into an unforgettable celebration. Several of them are just a short flight or drive away. Check out these towns that are some of the merriest spots to be found anywhere south of the North Pole.

Grapevine, Texas (2.5-hour flight to Dallas/Fort Worth): Everything's bigger in Texas—even Christmas. When it comes to Grapevine (GrapevineTexasUSA.com), which bears the official title of "The Christmas Capital of Texas," they do the holiday in a big way.

One centerpiece of the celebration, just outside Dallas, is the downtown Main Street, with a classic Christmas parade, throwback charm, decorations everywhere and loads of independent shops such as Dr. Sue's Chocolate (DrSueChocolate.com). Unlike Dr. Dre, Dr. Sue really is a medical doctor who believes that dark chocolate—stripped of all the sugar, gluten and preservatives—is actually good for you. Follow the doctor's orders!

You can also watch classic holiday movies in the town theater, and if you brought the kids, make sure to take the North Pole Express. It's a ride on Grapevine's vintage Victorian rail coaches that travel to visit Santa. How do they get from Texas to the North Pole in just 30 minutes? Santa's magic, of course!

Another must-see in the area is the Gaylord Texan Resort (Marriott.com) and the "ICE!" exhibit. The Lone Star Christmas at the Gaylord starts with a gigantic atrium in the center of the hotel filled with festive, handmade decorations and a calendar of activities, like gingerbread-house-making and The Elf on the Shelf scavenger hunt. Step out of the moderate Texas temperatures and into "ICE!" where the whole area is chilled down to 9 degrees Fahrenheit. It's that cold because all of the incredible sculptures, slides and structures are made of ice and carved by artists who come from as far away as northern China to create these masterpieces.

Newport Beach, Calif. (2-hour flight to Santa Ana, Calif./11-hour drive): Who says surf and Santa can't mix? The Newport Beach Christmas Boat Parade (ChristmasBoatParade.com) has been running annually since 1907 and currently features a run of five straight nights each year as decked-out boats tour the bay side of the Balboa Peninsula to an audience that numbers 1 million each year by the time it's all done.

What's even cooler is that you can actually be in the parade by hopping aboard one of Newport's own Davy's Locker Holiday Lights Cruises where your ride is part of the parade line. You'll not only get to see boats lit up on the water, but also get a look at the decorated waterfront mansions surrounding the bay.

For a closer look, hop the ferry from the peninsula over to Balboa Island and take the Holiday Home Walking Tour (VisitNewportBeach.com) that lets you see 12 island homes and cottages with over-the-top decorations to put you in a festive mood. 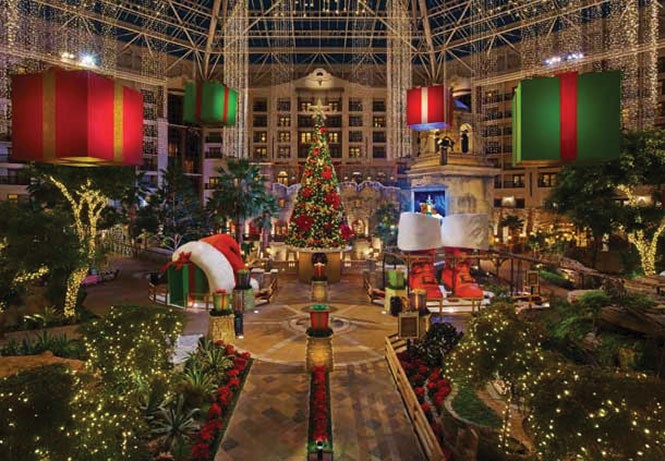 Phoenix/Scottsdale, Ariz. (1.5-hour flight to Phoenix/10-hour drive): Christmas in the Arizona "winter"—Baby, it's warm outside!—can be enjoyed at the Fairmont Scottsdale Princess (Fairmont.com/Scottsdale). Guests at the resort, as well as the public, can stop by for outdoor ice skating, a Christmas carousel, cooking s'mores over an open fire, a petting zoo and a train ride to tour the resort's lagoon with over 2.8 million lights on display. Don't forget to stop by the Enchanted Plaza, with a musical tree and animated light show. While you're at the resort, make time to dine at one of their award-winning restaurants. Toro Latin Restaurant and Rum Bar is the latest addition to the collection.

Scottsdale also held its first ever "World's Best Sand-Sculpting Championship" (ExperienceScottsdale.com) at Talking Stick Resort this year—because that's the sort of thing you can do in the desert in December.

Las Noches de Las Luminarias is- Spanish for "walking through the Desert Botanical Garden (DBG.org) at night and seeing cacti and other Southwestern fauna lit up by over 8,000 traditional hand-lit luminaries while drinking warm cider and listening to live Mariachi bands"—roughly translated, of course.

Ogden, Utah (45-minute drive from downtown Salt Lake City): If you don't have the time to travel far, just take a short drive on Interstate-15 and find yourself in Santa's Village—aka downtown Ogden during December. Ogden's Christmas Village (OgdenCity.com) regularly makes it onto "Top 10 Christmas Destinations" lists from across the country thanks to a light parade opening ceremony that includes fireworks and over 60 cottages that are lit to create a magical winter-night experience.

Besides cottages such as Santa's Castle, Kris Kringle's Cupcakery and the Ornament Factory, there's shopping, entertainment and a train ride through a tunnel decorated in glow-in-the-dark paint.

Christmas comes once a year, but it can definitely be celebrated in more than one place. CW

Kathleen Curry and Geoff Griffin trek around the globe near and far and host the Travel Brigade Radio Show and Podcast. You can find them at TravelBrigade.com and on Twitter @TravelBrigade. Enjoy the Trip!