How Occupy Came to SLC
By Jessica Lee

In September 2011, as thousands assembled on Wall Street to draw attention to the corruption of our economic system, no one anticipated that an international movement would grow out of the mere occupation of a public place.

And yet, over the past few months, thousands have gathered in hundreds of cities to create new civil spaces in which grievances can be aired, solutions found, connections forged, communities fostered and ideas, so often shackled, finally freed. These impromptu encampments have brought together strangers from all points on the political, social, economic and cultural maps. By literally removing the walls between neighbors, these communities have created a culture of open, transparent and innovative thinking. 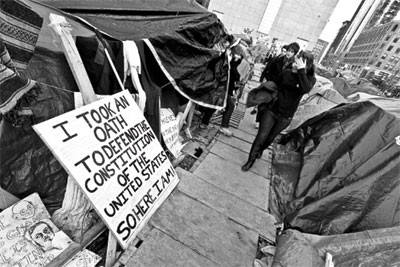 Occupy Salt Lake City is one of these communities. What began four months ago when the first tents were pitched in Pioneer Park has now coalesced into a group seeking to find radical solutions to both local and national issues. The beauty of the Occupy movement is that it humbles and empowers participants; they are able to acquire the knowledge, tools and, most importantly, the support needed in order to take action. In a society that constantly puts its people in a state of complacency, this, more than anything else, is the power of the movement. It asks you to step up and take responsibility, make mistakes, ask questions and constantly push boundaries.

While many of the physical occupations have been disbanded, evicted and brutally pushed away, Salt Lake City still hosts a vibrant 24-hour tent assembly at Gallivan Plaza on Main Street, and holds weekly General Assemblies and Workgroup meetings to keep the dialogue moving forward. Education and direct participation are key to this dialogue.

One of the things Occupy wishes to educate our city about is the American Legislative Exchange Council (ALEC), which will be holding its 39th-annual meeting in Salt Lake City from July 25 to 28. This organization brings representatives from major corporations (such as Monsanto, Wal-Mart, PhRMA and Koch Companies) into closed-door meetings with legislatures from all over the country in order to draft “model bills” for the upcoming year—bills and legislation that benefit profits over people, and corporations over communities. Many of the anti-immigration bills being put into place, including Utah’s House Bill 487 (the federal lawsuit against which will be heard Feb. 17) were conceived and drafted by ALEC tasks forces. The ALEC Welcoming Committee is coordinating with national activist groups in order to prepare for July, and will be reaching out to the groups most strongly influenced by decisions that are not drafted by the people, but by money and lobbyists.

Direct participation comes in the form of Occupy Elections, an initiative that will place participants as delegates in both the Democratic and Republican meetings that decide who will be allowed to run for office. The goals are twofold: Occupy Elections will allow people to fully participate in their government and will also show them the broken and vulnerable nature of the electoral system.

During the next year, Occupy SLC will be working together with existing organizations such as Peaceful Uprising, the National Prison Divestment Campaign, Transition Salt Lake, One World Cafe, the Revolutionary Students Union and the other Utah Occupations (such as Provo and Park City) in order to broaden our community and create an even stronger push for reform and transformation. There is strength that comes from education and collaboration, a power which comes from pooling together the collected experiences and wisdoms of groups and individuals.

We are Occupy Salt Lake City. We are the 99 percent. We are adaptable and determined. We are prepared to question the status quo. And we invite you to join us. It is together that we shall prevail.