Of Merchants and Samurai 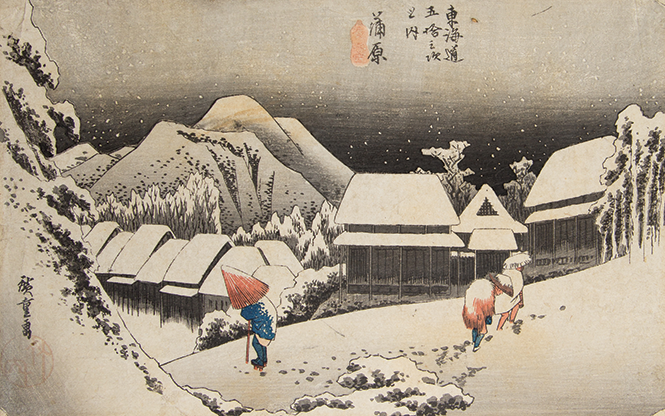 If your primary familiarity with ancient Japan comes from popular culture, you probably associate it with the age of the samurai—a warrior elite class. While samurai's place at the top of society is historically accurate, a new exhibition at the Utah Museum of Fine Arts adds complexity to the layers of that society.

"When you think of Japanese culture, it's samurai, warriors," says Luke Kelly, UMFA associate curator of collections and antiquities. "Even though they're still on top, there's so much else going on."

Beyond the Divide: Merchant, Artist, Samurai in Edo Japan showcases pieces from the museum's permanent collection representing the Edo era in Japan, which spanned 1603-1868. In addition to painted silk and paper screens, woodblock prints and sculptures, the exhibition includes armor and swords from the period. Most of these items, in that time, would have been owned by members of the samurai class—perhaps gifts for marriage or other special occasions—and never seen by the public.

According to Kelly, this was also an era where some of the class divides were beginning to blur, largely as the result of a growing merchant class. "Merchants were the bottom of Edo-period society, according to the laws and societal view," Kelly says. "But because it was a highly urbanized time, merchants were the lifeblood of cities. If they weren't there, those cities simply could not exist. ... By the 19th century, those divisions are starting to merge. Merchant families are starting to marry into samurai families."

The growing merchant class was still segregated in terms of available opportunities—only members of samurai families, for example, were accepted to train at the elite artistic schools—but they did have money. That meant an increasing ability to patronize artists, and have different facets of Japanese life represented in the works themselves. "They could make inroads and start ordering screens and panels, to patronize not only the old schools but newer artists," Kelly says. "What begins to happen is, you have the beginning of celebration of life outside of the elite. Especially in the 19th century, you see the celebration of ... not just a temple, or Mount Fuji, but the bridge into a commercial district."

One common misperception of this era might be that it was the time of samurai warfare, when in fact, it was largely a time of peace. While Beyond the Divide includes samurai swords as part of the exhibition, these would have been primarily artistic creations, not practical ones. "Swords were still created and prized," Kelly says. "But for swordmakers, because they don't have to be weapons of war, they could go back and study swords of the past; one created in 1847 was by a swordmaker who studied swords from the 1300s and 1400s. And they were able to source the best beginning materials."

Although Kelly has wanted to mount an exhibition of the museum's Japanese materials for nearly a decade, Beyond the Divide came about largely as the result of coordinating with the availability of a touring exhibition from the Minneapolis Institute of Art. Seven Masters: 20th Century Japanese Woodblock Prints showcases seven artists who pioneered a variation on the classical Japanese woodblock print style of ukiyoe—this new style called shin hanga—to meet a growing Western demand for Japanese art in the early 20th century.

"[Print publisher] Watanabe Shozaburo saw this opportunity—with Japan now in this modern age, the artists studying Western techniques as well—to sell new prints that recall the prints of the 19th century," Kelly says. "When we learned of Seven Masters being put together in Minneapolis, we felt this was a great confluence. We've never shown a Japanese traveling exhibition in our 69 years, and many of our own pieces haven't been seen in over 20 years."

Several public events are scheduled in conjunction with both shows. Seven Masters' curator from Minneapolis, Andreas Marks, visits Feb. 5 for a lecture; on April 1, "An Evening in Japan" offers activities including an open studio featuring painting, music and calligraphy, in addition to a screening of the 2015 period-piece anime film Miss Hokusai, based on the life of a celebrated 19th-century Japanese artist.