Of Monsters and Men

A woman's point of view gives unique spark to the dark romance of Beast. 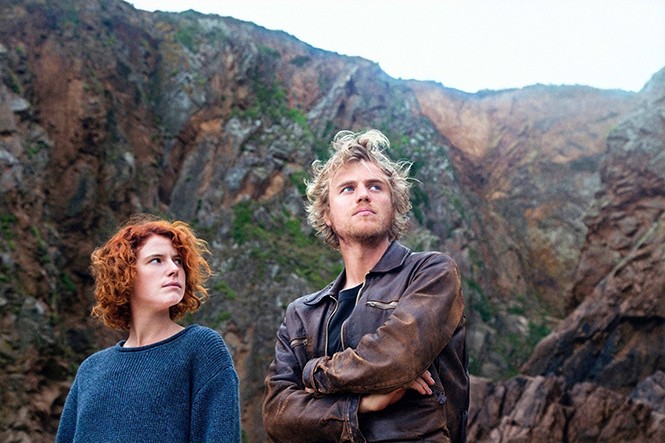 This movie would be a total upendingof its genre—if it could be easily slotted into any single genre. It's a serial-killer movie in which the serial killer and his crimes are merely part of thebackground. It's a romance and a thriller; a mystery and a psychological study. And in all those aspects, it toys with our expectations and oursympathies, and with multiple ambiguities. I'm not even entirely certain that it's the woman here who is the vulnerable one, and the man the violent one. Atthe very least, they each contain a dollop of both powerlessness and power. At the very least, the resolution of this tale of love, sex, escape, vengeance, justice and betrayal is open to more than one interpretation.

Moll (Jessie Buckley) seems ripe for exploitation. She's a grown woman still living with her parents; her bully of a mother, Hilary (Geraldine James),simultaneously treats her like a child and like a servant (Moll's "job" is to look after her father, who suffers from dementia). At Moll's birthday party, thefamily gathering that opens the film, she is upstaged by her sister, ordered about by her mother and condescended to by old friends. Her family life isappalling; her entire life constricted. It doesn't help, either, that she's stuck on the rural Channel Island of Jersey with little to do and little chance, it seems, of agetaway.

Enter Pascal (Johnny Flynn), who is a bit naughty, a bit dangerous, a bit exciting. He poaches rabbits nonchalantly; he threatens with his hunting riflemen who threaten women. Moll takes to him instantly, lies for him instinctively mere minutes after they meet and can't stay away from him. Dating himbecomes a way to piss off her mother, on top of the thrill of his oddball sexiness and the fact that he is, remarkably to the modest Moll, also into her.He's an outcast, a weirdo, just like Moll: "We're the same," she will eventually tell him, and mean it. (In a just world, this movie would catapult bothBuckley and Flynn to stardom; they're mesmerizing separately, and explosive together.)

Or maybe she's confused. Maybe she's deluded and desperate. Could Pascal be responsible for the spate of dead teenage girls the local TV news keepsgoing on about? But no: Isn't that just more of the same narrow-minded bourgeois crap that her mother personifies, which cannot abide a nonconformistand is always eager to attribute the worst to someone who refuses to blend in?

Pearce hews so intimately to Moll's perspective that we are inevitably on her side, by turns angry and sad and delighted on her behalf. So many moviesabout women by male filmmakers feel like those men don't know any real women or have never spoken to an actual female member of the humanspecies. Pearce, on the other hand, makes us believe that he listens to women; one of the most striking lines of dialogue here, in a movie full ofstriking dialogue, is when Moll says that she loves the way Pascal smells, which is a thing that women know is so important about finding a manattractive, yet which I cannot recall ever hearing a woman in a movie say before.

But maybe we shouldn't be on Moll's side? We slowly begin to learn about some terrible behavior in Moll's past—though, as with so many things inPearce's brilliant, biting script, the "facts" are presented to us through the words of people who might not be entirely trustworthy, who might havedeluded themselves into their own distortions of reality, or who deceive with malicious intent. Beast keeps us endlessly on edge, wondering just whatto make of Moll, and maybe even to whom the title might refer. If we enjoyed a broader range of messed-up women onscreen, she might not feel sorevelatory a character. And Buckley's intensely thorny embodiment of her might not feel so intoxicating.