Great grub in your mitts 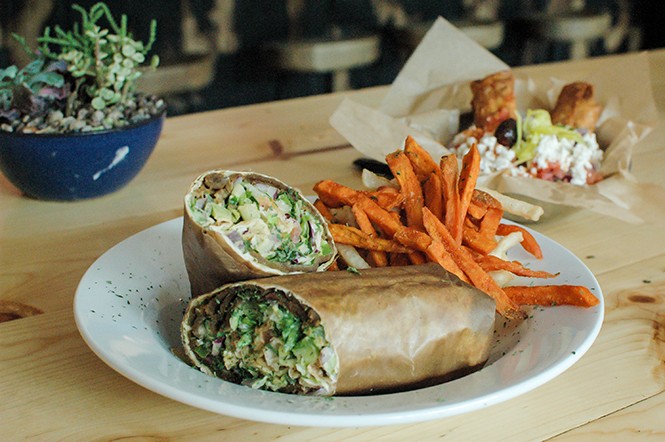 There's a trio of new-ish eateries in town that are quickly changing the way I think about fast food. With the recent opening of GR Kitchen, Padeli's and a new Spitz location, I'm learning that convenient food can also be wholesome and delicious. The three business have much in common: They all specialize in handheld fare like gyros and wraps, and they all offer up Mediterranean flavors at budget-friendly prices. A sign I saw near Padeli's, outside the Judge Café, read: "Friends don't let friends eat in chain restaurants." These three spots are a terrific alternative to chains and franchises, although I could easily see GR Kitchen, Padeli's and Spitz taking the nation by storm.

Chris Tsoutsounakis, owner of GR Kitchen, grew up working in his family's Astro Burger restaurants, the first of which was opened by Greek immigrants John Lyhnakis and Angelo Tsoutsounakis. It's a smart concept. Think Chipotle, but with Mediterranean flavors.

GR Kitchen is spacious and filled with light. Easy, free off-street parking is a nice bonus. At this eatery, customers work their way down a food-filled assembly line, after deciding whether they want a traditional gyro ($6.95), a plate (protein, grains, two sides and pita for $9.95), salad ($9.95), wrap ($8.59) or tacos (three for $8.59). There's also a kids' plate for $4.75. Once a delivery system has been selected—gyro, wrap, plate, etc.—it's time to pick a protein from a list that includes classic lamb/beef gyro meat, spit-fired pork, housemade falafel, spit-fired chicken, or chicken souvlaki. I've tried all but the chicken souvlaki—which is served kebab-style on skewers—and have loved all of it, but particularly the pork, which reminds me in flavor and texture of Mexican carnitas.

After choosing a protein, the next step is to find a sauce. There's yogurt and cucumber tzatziki, spicy red pepper and feta kafteri (my favorite) or hummus, made from chickpeas and tahini. The toppings and sides are where GR Kitchen really excels. Side dish options include delicious kale salad, quinoa, lemony rice, tomatoes with cucumber, roasted veggies, couscous and Greek salad. For toppings there are crumbled feta cheese, crunchy lettuce, jalapeños, olives and red onion. By the time you've piled on toppings and sides, you've got a lot of food for under $10. Oh, and GR Kitchen serves locally brewed craft beers, too. If there's a reason to visit Midvale, this is it.

Padeli's Street Greek is owned by brothers Leo, Frank and Chris Paulos, who named their newest venture after their father. The Paulos family founded Utah's Greek Souvlaki restaurants, but Padeli's is more upscale (although the space is small) and ingredients are of higher quality. As with GR Kitchen, options also abound at Padeli's, where you can build your own meal or select from a number of featured menu items.

To build your own, you first pick your "base"—a warm pita gyro ($6.50), "street" mini-gyros (3 for $7.50), a bowl ($8) or a wrap ($8). The bowl comes with lemon rice and garbanzo beans, and the wrap has romaine lettuce and garbanzo beans. Next, you'll choose a filling from traditional lamb and beef gyro meat, chicken rotisserie, falafel or pork rotisserie. Then, a sauce from choices that include traditional tzatziki, spicy feta, creamy Sriracha, hummus, creamy mustard or roasted pepper tzatziki. Finally, top it all off by choosing three toppings from an array including romaine lettuce, spinach leaves, red onions, sport peppers, shredded cheddar cheese, sliced pepperoncini, roasted red peppers, feta cheese, banana peppers, chickpeas, Kalamata olives or diced tomatoes. That sure leaves a lot of room for customization.

I'd happily eat everything I've tried at Padeli's again. The classic gyro is a slam-dunk with roasted pepper tzatziki, and the chicken is great with creamy mustard sauce. The falafel is especially memorable thanks to its moist interior and superb flavor (the secret is blending feta cheese in with the falafel mixture). While you're there, be sure to treat yourself to one of the homemade brownies—they're killer.

The new Sugar House Spitz ("Home of the Doner Kebab") is booming. And that's not surprising given the warm, friendly atmosphere and funky vibe. I love that the restroom walls and the space behind the ordering counter are decorated with old vinyl covers. What's not to love about the classic Herb Alpert & the Tijuana Brass' Whipped Cream & Other Delights album cover?

A doner is the Turkish name for rotisserie meat that is thinly sliced from a rotating spit and usually served on flatbread like lavash or pita. While I prefer pita, Spitz serves its doner meat—beef and lamb, chicken or mixed meats—on toasted lavash bread, although you can also get it in bowls, "doquitos" (Mediterranean-style taquitos), baskets or salads. The basic "Street Cart Doner" ($8.75) is pretty hard to improve upon: It's a choice of lamb/beef, chicken, mixed meats or falafel served on lavash or as a wrap, with romaine lettuce, shredded cabbage, fried lavash chips, tomato, onion, green pepper, cucumber, tzatziki and garlic aioli. Yes, it's as messy as it sounds.

The falafel—which I raved about at the downtown Spitz location when I reviewed it in May 2014—was dry and lacked flavor at the Sugar House locale. It certainly didn't taste like it was made in-house. But be sure to order the crunchy fried garbanzos with olives ($5.50) to nibble on while you're tempted by Spitz' craft cocktails, wine, homemade sangria and beer.