Off the Eaten Path: Billy Blanco's 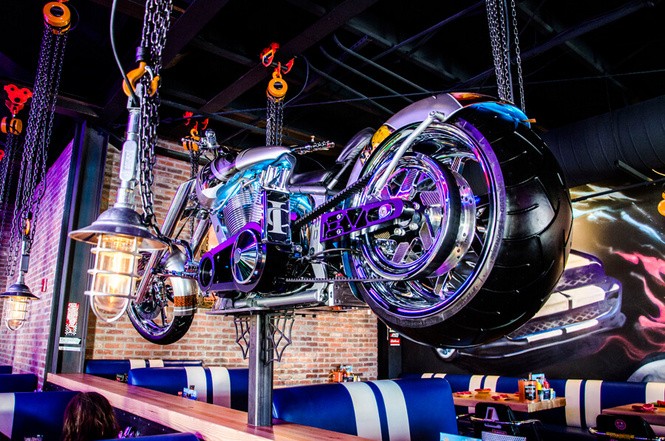 I've never met a more intelligent restaurateur, or one as hard-working, as Park City's Bill White. Each of his restaurants is unique - Grappa, Chimayo, Windy Ridge Cafe & Bakery, Wahso, Ghidotti's, Sushi Blue - and each is successful. That's quite a track record in such a fickle industry.

But with Billy Blanco's Motor City Mexican Burger and Taco Garage, located in Pinebrook, Bill White has turned his attention away from fine dining to "Motor City Mexican." Only Bill White would purchase a brand-new Shelby GT, Ducati racing bikes, tricked-out Harley-Davidsons, and vintage cars like a mint Dodge Charger for "decor." The entire base and coolers of the centerpiece bar at Billy Blanco's is constructed from heavy-duty, high-end, chrome-plated toolboxes, the type you see at NASCAR races.

He bought an old mill in Kamas just so he could "harvest" the chain pulleys, tractor gears and other heavy metals which he incorporates into the design of Billy Blanco's. The door to the men's restroom is equipped with a gas pump handle. The booths have classic 60s-era racing stripes and the sports car-style bar seats were designed by White himself, who also knows how to wield a welding torch. And yet, the place isn't kitschy. "Just because you can serve food on a hubcap doesn't mean you should," said White, quoting a wise colleague.

The Billy Blanco's menu is composed primarily of Mexican-inspired fare such as burritos, tacos, fajitas, carnitas and such, along with South-of-the-border-flavored soups and salads, and an array of sandwiches, ribs, wings and burgers. The dry-rubbed ribs are spectacular: hardwood-smoked and served with South Carolina-style BBQ sauce or smoky-sweet sauce, both made in-house. Just as tasty a starter is the buffalo wings, a generous serving of meaty wings spiced with Tapatio hot sauce, but not slathered in it - they come to the table dry and delicious. While you enjoy Billy Blanco apps, I recommend a cocktail: the Motor City Mojito is a big hit, as is the Pimp My Ride Margarita, an incendiary cocktail that pits sweet grilled pineapple against smoked Habanero peppers. Blanco's also features a "Beer & A Shot" special for $7: a pint of draft brew and a choice of a number of liquors, including Espolon Reposado Tequila, Jagermesiter, Kraken Black Spiced Rum, Jack Daniels Honey and others.

A crowd favorite at Billy Blanco's is the gargantuan Benji Burger. It stands about half a foot high: one-third pound of Angus beef chuck, bacon, shaved BBQ short rib, a choice of cheddar or blue cheese, lettuce, mayo, tomato and onion on a high-quality grilled bun from Windy Ridge Bakery. You may need to eat it with a knife and fork ... or a chainsaw. Chances are Bill White has one nearby.