A chilly Sunday shows a town's music scene isn't defined only by what happens after dark. 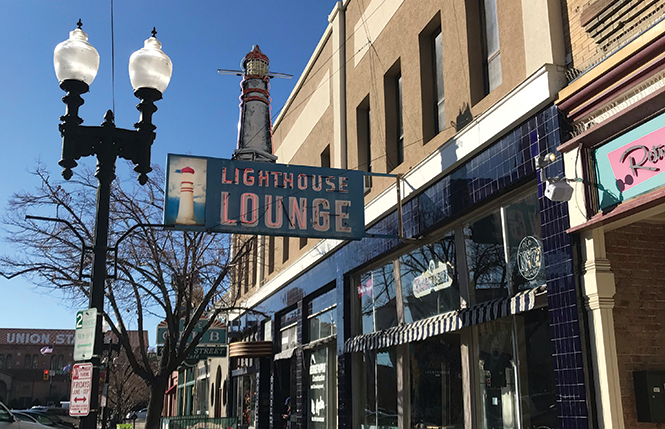 My favorite place to get away from home for a day is Ogden. While SLC's historic downtown buildings have skyscraper neighbors and our slopes ooze silicon, Ogden's streets remain delightfully vintage, and their culture easygoing. One bright, sunny—and cold—Sunday recently, I jaunted up there to spend a quiet day indulging in the sights and taking in Ogden's sounds.

When I rolled into the Lighthouse Lounge (130 25th St., 801-392-3901, lighthouseogden.com) at noon, I was just in time for the start of their Sunday Funday brunch show, which features an acoustic musician each Sunday from noon to 2 p.m. Local musician Brad Thomas was onstage going through his soundcheck, so I moved to the dark section of the bar, where patrons sat eating fragrant fried breakfast food (this should be a thing at more bars) and sipping bloody marys and beers. I decided to indulge in the bloody mary bar, despite hating tomato juice, because it still felt too early for beer. After stocking my mason jar of vodka and ice with V8 and various pickled items, I moved to the brighter side of the bar, which was sunny and dotted with sofas, chairs and low tables, conveying a coffee shop vibe.

Across from the windows looking out onto 25th Street sat a rather massive stage emblazoned with the words "Pabst Blue Ribbon." I settled near some other patrons on the edge of the couch, and watched as Thomas' set slowly gained confidence. His Roy Orbison covers were charming, and his folksy Orbison-influenced voice added personality to covers of Bruce Springsteen classics like "Dancing in the Dark." I sent a video of Thomas' Springsteen cover to my friend, who is very picky about Springsteen covers, but I personally loved it—it's easy to forget that people are just as passionate about things as you are, and nothing makes me remember the passion of others like seeing musicians cover songs. Thomas mentioned loving Springsteen as a teen before starting his version, and it—along with his covers of other classics like Bobby Darin's "Dream Lover" and Orbison's "Crying"—was delivered with the ease of fondness and familiarity.

After an hour, Thomas said he was going to go outside and "roll around in the dirt" to forget the mistakes he'd made, but instead jumped off the stage to begin chatting with a fair number of folks. For my part, I moved back to the dark side of the bar to snag another beer—one I literally jumped at seeing, since it was my favorite back in Minnesota. Three things sum it up: Lavender, sunflower honey, dates. What does that spell? LSD!

Although it didn't trip me out, it did give me the exact amount of chill I really needed to settle into the rest of the set, which included some originals by Thomas and a cover of "Hallelujah." Being a little bit day-buzzed and sappy at this point, I started thinking about how glad I was to be able to roam up here and take part in this musical moment in time, sharing in what seemed to mean a lot to Thomas and his audience.

It must have been fate that I found my favorite lavender beer at Lighthouse, because my next stop was Lavender Vinyl (123 25th St., 801-605-3425, lavendervinyl.com) right across the street. I'd never visited before, but I went inside with the intention of finding something. Upon entering, I flipped immediately through the new indie section, and weirdly stumbled across a Guided by Voices record (not new, but in fact older than myself) and grabbed it immediately. Besides that, I found staples like Bill Callahan, Sufjan Stevens and Angel Olsen, mixed in with locals like Josaleigh Pollett, Choir Boy and Nick Passey. Beyond that section was a small metal section, a small bluegrass and country section and a big row in the middle of alphabetized, mostly older and classic records (though there is a slot that just says "Billie Eilish," so they're keeping up with the youth).

A string of EPs is looped overhead, which seems sacrilegious for a record store to do, unless the music on them is truly bad. One wall featured records and cassettes by locals, next to a rack of classics like the aforementioned Springsteen and his born-in-the-USA butt. There are also screen-printed shirts, a rack of thrifted tees ranging from band tees and Utah Jazz tees to simple Carhartts, and shelves of local art, incense and record-cleaning kits. It truly is a one-stop-shop for record lovers just starting out to collect or looking to dig in the dollar bins below the main stuff.

On the new release rack, I found something that made me sadly ditch the GBV album: Boy Harsher's brilliant minimal wave album Careful, which defined my year in dancing. While chatting about it at checkout, I learn that Lighthouse Lounge and Lavender partner up on the bar's Wednesday vinyl nights, which Lavender sponsors. On my way out, a dusty jar of lavender sprigs summoned a chuckle from me. If lavender relaxes the body and mind, it certainly did on this low-key day in Ogden.