The sweet spot of intimacy & popularity 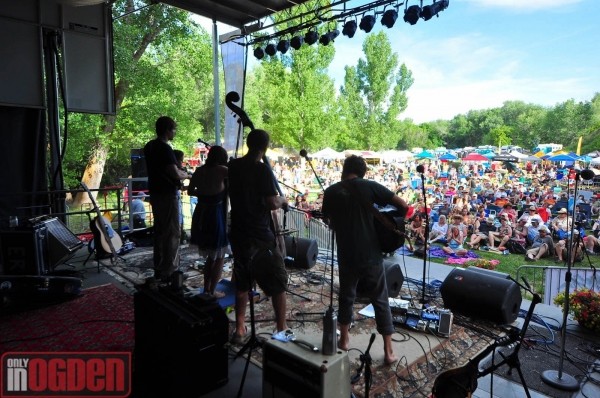 Michelle Tanner was at Pickin’ in the Pines, a bluegrass- and acoustic-music festival based in Flagstaff, Ariz., listening to Dan Kruger’s banjo, when she felt so moved that she decided to take action.

“I was with my mom, and we had tears in our eyes from the banjo playing,” Tanner says. “And I just looked at her and said, ‘We could do this in Ogden!’ ”

It’s a festival that, at best, could make people think twice before leaving the city (or even the state) for other bluegrass- centered festivals, and, at worst, will provide an intimate celebration of that genre as well as roots and blues music.

“Everybody in Ogden was driving to Salt Lake City or out of state to go see music,” Tanner, an Ogden-ite through and through, says of why she was initially interested in launching the festival. “I was hoping for a way to keep people here—it’s just a really creative, artistic town.”

In 2012, The Ogden Music Festival attracted 2,000 attendees at its Fort Buenaventura site—up from 800 at the inaugural event four years previous. But even though the popularity of the festival is growing, the event doesn’t draw the crowds that larger festivals tend to, which helps it retain its intimate charm. Tanner predicts that in 10 years, the festival will sell out of both campsites and tickets, with about 4,000 people in attendance. That’s fortunate for Utah bluegrass fans, because, “I think when you go to a festival that has up to 20,000 people [in attendance], you lose some of the intimacy,” Tanner says. “I think that can be a drawback.”

Tanner, like many die-hard bluegrass fans, finds the genre engaging not only because of its family-friendly dance-ability that’s perfect for an outdoor festival, but also for its genuine nature and high- quality instrumentation.

“[Bluegrass] is a hard type of music to play. It doesn’t revolve around trends or TV play-ability,” says Sam Bush, veteran mandolin player and festival headliner. “I think it brings a certain amount of respect [to a festival], too.”

Bush is, in essence, a connoisseur of bluegrass festivals. When he was a boy, he attended the Roanoke Bluegrass Festival in Virginia, which was the “first” bluegrass festival, he says. That’s where he discovered late-night jam sessions and where he honed his chops with the likes of Tony Trischka, David Grisman and Andy Statman, all of whom went on to play music professionally. Now, Bush plays dozens of bluegrass festivals annually. For him, small festivals like Ogden’s are vital for the genre, and for music in general.

It’s a place where musicians can connect with one another—be it in the camping area after hours, or in artistic workshops—and, more so, where people, especially a younger generation of players, can be inspired, at the instrument “petting zoo” or during one of the many concerts.

Kate MacLeod, Utah resident and co-headliner, gets inspired at these sorts of festivals, which she plays at around the country, when she can hear bands that she wouldn’t be able to otherwise.

“Sometimes, the large festivals can get to the point where they can hire anyone. It changes the atmosphere of the festival,” MacLeod says. “Ogden is still at that very special place in a festival’s development where they are featuring music that is under the radar.”

Such bands performing at the Ogden Music Festival include The Tuttles, The Boxcars, Run Boy Run and locals Ugly Valley Boys.

MacLeod says she’s excited to play the festival because, “I’ll know a lot of people in the audience, which is really a lot of fun. I’ll see people that I’ve known for years. In Ogden, I get to share with my community.

“The size of the Ogden festival is a little bit more intimate,” MacLeod continues. “It’s in a more personal vein. And that’s a really important part of this type of music.”Â