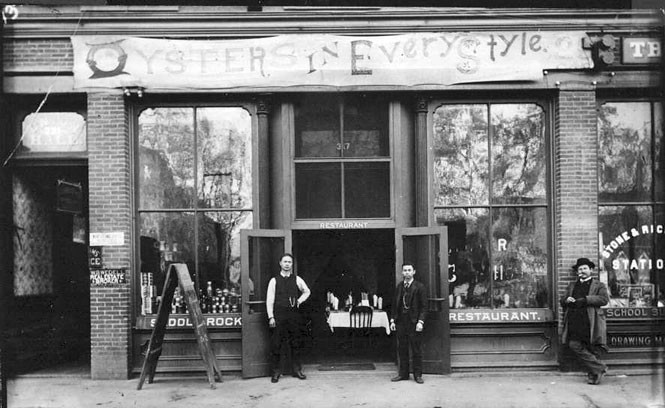 
April 10 through 19, Ogden's downtown restaurant community celebrates Ogden Restaurant Week (OgdenRestaurantWeek.com), during which diners can enjoy a prix-fixe three-course dinner for $15 or a two-course lunch for $8. Dining options run the gamut from pizza and burgers to Mexican, Thai, Italian and Japanese cuisines, with each participating restaurant offering different choices of appetizers, entrees and desserts.

"These prices are typically seen in the realm of national chains and franchises located on 'restaurant row' or in suburban strip malls," said Steve Ballard, owner of Sonora Grill and Thai Curry Kitchen. "Our goal is to let people know that locally grown and prepared food is available in locally owned restaurants with unique history, architecture and décor."


I'm not sure when Scott Evans—owner of Pago, the recently relocated Finca and the recently opened Liberty Tap House—ever sleeps. Maybe he doesn't. In any case, he's just launched another eatery—a distinctive, modern diner—in the space that was home to the original Finca restaurant (1291 S. 1100 East, 801-487-0698). It's called Hub & Spoke Diner (HubAndSpokeDiner.com), and Evans promises to deliver a casual dining experience using "fresh, top-quality" ingredients. "Just because it's a diner doesn't mean it has to be a greasy spoon, old dingy décor or frozen, pre-packaged ingredients," Evans said.

Hub & Spoke Diner will serve breakfast, lunch and dinner seven days a week, and you can even enjoy a glass of wine, cold beer or a "boozy shake" with your meal. There's also a full espresso bar and coffee shop inside the diner; foods include house-baked bread, pastries, scones and pies; house-smoked bacon; housemade sausage and more.

Quote of the week: Every morning must start from scratch, with nothing on the stoves—that is cuisine.—Fernand Point