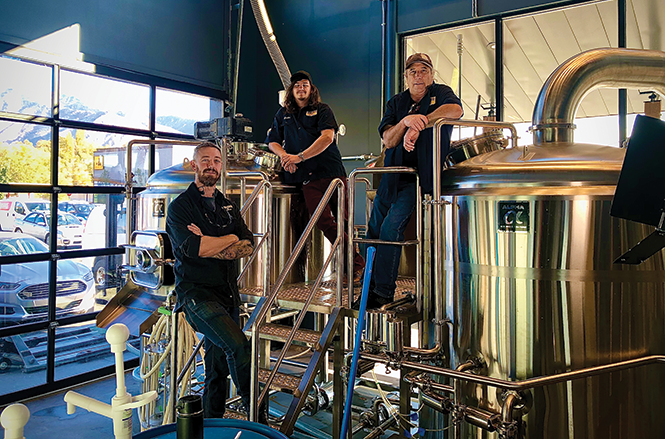 It's been an adventurous few years for Pat Winslow, an Ogden guy and craft beer lover who spent the majority of his adult life working for the railroad in Weber County. After earning his retirement, Winslow decided to channel his home brewing energies into a public space where craft beer lovers from all over the state could come and share some unique suds in the town he loves so much.

Unfortunately, as often happens, a man and his vision don't always jive with local planning commissions. After the acquisition of the building and a successful crowdfunding push, Ogden City informed Winslow that a massive amount of capital was going to be needed to make Ogden River Brewing Company's new address work.

"It was the perfect spot," Winslow says. "That property was once occupied by Becker (Brewing and Malting Co.), a hundred years ago. I was really looking forward to carrying on the beer-making tradition at that spot."

Forced to regroup and search for a backup location, Winslow was introduced to a group of developers who had learned of Winslow's woes, and upon meeting, soon realized their craft beer goals were one and the same. "It was apparent after my first meeting with Bryan (Wrigley) and others at the Lotus Company that Ogden River Brewing may still happen," Winslow says.

You see, Lotus Company is a Wasatch Front-focused development organization that looks for underappreciated or forgotten properties, and tries to revitalize them into premium spaces. Lotus just happened to own many lots on and adjacent to the Ogden River. "I couldn't believe it," Winslow says, "and I couldn't have been more thrilled".

Now, the Ogden River brewpub is built, and Head Brewer Winslow is working on getting new beers out to the public. But he's not alone: The Lotus Company's enthusiasm for local craft beer has taken on new dimensions. Determined to create more community based brewpubs, Lotus established a Director of Brewing position that is helmed by Patrick Borque. Borque is well known in Utah's beer circles, having worked at breweries like Epic, Saltfire and Uinta. "My knowledge in starting up a brewery is basically why I'm here," Borque says. "I'm here to help get things up and running and translate their recipes into brewing processes and techniques that'll make Ogden River successful."

Winslow adds, "My assistant brewer Landon (Jeffrey) and I have been working on recipes for the last year or so, Patrick's (Borque) insight has really helped move us to the professional level." The "profession level" Winslow speaks of also includes a secondary building adjacent to the brewpub that is already under construction.

"I'll be here for the next six months as we work on the new building," Borque says. "We'll have storage space and our eventual canning line in there, hoping to have that online by the end of spring 2021. From ther,e I'll leave Pat and Landon to do their thing as I move on to Lotus' next project, Fife Brewing in Salt Lake City".

Once Ogden River is fully up and running, you'll see about 10 beer handles filled with a wide array of ales and lagers. I got a sneak peak of the first three beers that Ogden River has produced. Aviator American Wheat is a hybrid ale with notes of orange peel and coriander backing a more assertive toasty wheat base. Hop Train Pale Ale delivers a classic American pale full of light caramel with citrus and pine bitters, slightly overbalanced on the hop side of the spectrum. And finally, Union Station Amber presents a very traditional malt bill full of caramel malts, with a slightly more aggressive than normal hop bitterness.