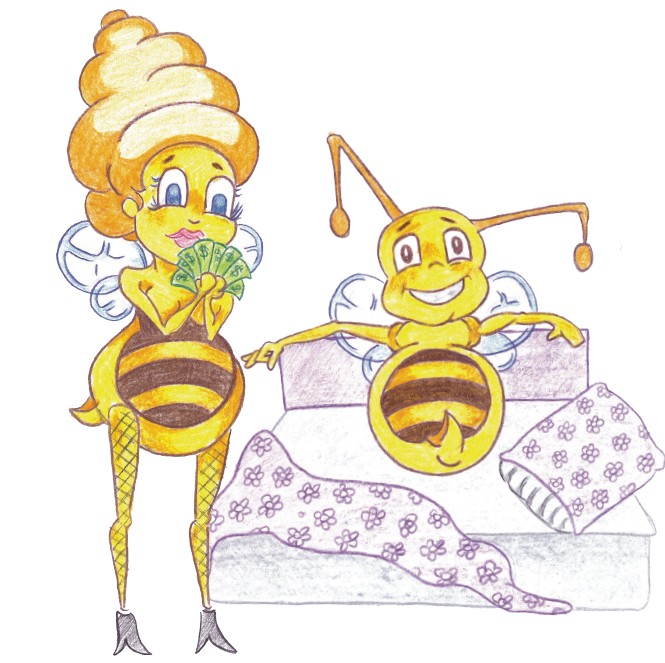 Russell Greer has tried everything to get a date. "I've tried the Internet; I've tried in-person dating. I just can't find anyone." The 24-year-old paralegal has a form of facial paralysis called Moebius syndrome from birth, where the deadened nerves inside his face deform the shape of his mouth. His quest for some form of intimacy took him to Salt Lake City escort agencies, which are legal in Utah. He says he paid $800 for a woman who took her clothes off and danced, but "she did nothing I wanted. I wanted a kiss, but she wouldn't do it."

He Googled "prostitute" and where to find them and ended up going to several brothels in Nevada, where prostitution is legalized. He flew to Reno and after 10 minutes of self-consciously hiding his features by keeping his back to women working at the brothel, he met "Jade," who took him to her room and negotiated a price of $1,800 for intercourse. "She made out with me, she kissed me, it was my first real kiss. I never felt so alive."

A subsequent encounter at the famed Moonlite Bunny Ranch in November 2014 did not go so well. Greer felt the woman he had hired for $4,000 cheated him, although she claimed he had consented to not have sex with her. After he sued her and lost, Greer decided to pursue another option. Rather than travel eight hours to Nevada or engaging in activity in Utah that could end up being criminal in nature, he drew up a manifesto for the "Mile High Neon" Brothel," which he intends to see open its doors one day. In the manifesto, he wrote, "A person should be free to pay for affection in a regulated, legal place—a place that offers security and health protection."

After Greer read case law related to the state's fight over same-sex marriage that upheld the individual right to "belong, to have companionship," he decided to confront what he saw as Utah's hypocrisy when it came to licensed sexual-orientated businesses. On the one hand, Utah code allows strip clubs and escort agencies, where what clients and escorts do off the books is a question of negotiation, yet prostitution itself and brothels are illegal. "I don't want to own or run a brothel," he says. "What I'm trying to do is say it's unconstitutional to deny a license for a brothel."

Greer admires the Moonlite Bunny Ranch, featured in a HBO reality show called Cathouse: The Series, as being closest to the business model he seeks to emulate. Owner Dennis Hof is a determined advocate for legalized prostitution, as well as author of The Art of the Pimp. Ask him what the challenge is of running a bordello and he says, "Being man enough to be around all these girls having a great time all the time. I just wish I had 10 penises. I'd be a happy guy."

While Greer's drive to see a legal brothel open in Salt Lake City stems from both conviction and personal need, Hof identifies significant benefits to legalizing prostitution. The trafficking of minors "will slow way down," since they would have to get a business license to prove their identity, at least according to the Nevada brothel-licensing model.

While talking on the phone, Hof goes online and tells a City Weekly reporter that in just two minutes he has identified close to 150 women in Salt Lake City selling sex on Backpage.com and Eros.com. "It wouldn't surprise me at all that the illegal sex trade in Salt Lake City is a $100 million business. There's no benefit to the state, it's a detriment." Legalizing prostitution would mean sex work changing from crime-driven to "a huge profit center."

Laurin Crosson runs RockStarr Ministries, a Utah nonprofit dedicated to providing resources for trafficking victims. She disagrees vehemently both with Greer's plans and Hof's characterization of brothel life. Crosson says her one-time pimp ran her through a West Coast circuit that concluded with working at a Nevada brothel, between 2003 and 2006. The brothel took half her money, the pimp, the rest. "I don't ever remember seeing any money," she says. Women are "confined like a prison to these places," she continues. Contrary to Greer's assertion they get to chose the clients they service, she says once the men have paid, it is their responsibility to service them. At least with street-sex work, she got to look into a car at a potential client. If she got a weird vibe, she could walk away.

"People go into it thinking it's just going to be sex work," Crosson says. "The brothel is your pimp, the brothel requires you to make a quota just like a pimp does. You're supposed to moan and groan on cue, and everything's fine. It never was. I lived in fear." As to Greer's need to have access to legalized prostitution, she says that being disabled and unable "to go out and get a relationship," does not lead to having "a right to ejaculate. That's not a basic human right."

Salt Lake City Police Dept.'s public information officer Det. Gregory Wilking expresses shock that anyone would propose opening a brothel in Utah, "because I feel it's not in the realm of reality in this community." That said, Wilking argues there are some advantages to a regulated brothel in terms of preventing the spread of STDs, documenting and having legitimately reported income and also providing a safer environment than hotels or other locations "for this activity to take place."

After the Department of Commerce wrote to Greer in early January 2016, telling him that his initially approved application to register a brothel as a sexually orientated business was canceled because the business was illegal, Greer decided to sue Utah. He sent a letter to the governor's office and to the Department of Commerce informing them of his intent to file an "applied challenge" to Utah laws that define brothels as "nuisances," claiming that laws that render prostitution as illegal are unconstitutional.

He hopes to hire local attorney Andrew McCullough, who has made a career for himself in part defending people involved in the adult- entertainment industry. McCullough says he is intrigued by Greer's plan, noting that several attorney friends who are members of the First Amendment Lawyers Association, to which he belongs, have filed federal lawsuits in San Francisco recently, seeking that California's prostitution law be stricken. "I firmly believe that it's nobody's business what you do in the privacy of your home or in somebody else's home or in a brothel," he says.