Can I find oil in my backyard? 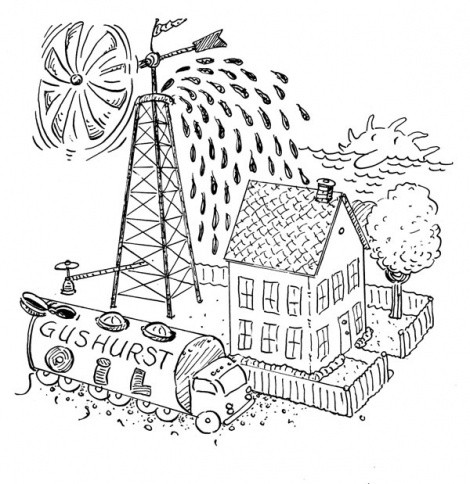 I took a geology class not long ago and read about a guy that had massive amounts of coal underneath his ranch. The dude sold the ranch, made millions, and moved into a penthouse. Granted, I live in suburbia and don’t have enough room for an open-pit mine, but if I have oil I can just drink my neighbor’s milkshake, right? How do I make like Jed Clampett and find oil in my backyard? —L. Gushurst, Groton, Connecticut

This is a great idea. Drilling in the gulf obviously has its drawbacks, whereas the only thing you could possibly screw up is Long Island Sound. Better get the auger in now before some wuss environmentalist persuades a judge to shut you down. Here are the essential questions you need to ask.

Do you own the mineral rights under your property? In many countries, the government automatically owns all significant mineral deposits, no matter whose land they’re under. Here in the United States, both the surface rights to a property and the mineral rights below can be privately owned, but they’re separable—acquiring the former doesn’t necessarily mean you’re getting the latter. When you bought your house, did you scrutinize the deed to make sure you got the rights to the minerals too? Didn’t think so. You’d better contact your county deeds office, engage a title company, or hire a lawyer.

If the rights are yours, you can either use them yourself or lease them to an oil company. You mentioned drinking your neighbor’s milkshake, which the cultured reader will recognize as a reference to the 2007 movie There Will Be Blood, wherein an unscrupulous oilman (as if there were any other kind) boasts that he’s sucked the oil out from under another’s property. That’s legal in many jurisdictions under what’s called the “rule of capture,” meaning anything you can produce from a well on your property is yours, even if it drains from somewhere else. If your neighbors don’t like it, they can drill their own wells—unless, of course, they’re too late.

Can you develop any rights you do have? The two biggest problems oil prospectors face are local regulations and access. Laying a simple gravel road to a remote drilling site can easily cost 10 grand, but I’ll assume in Groton you can just have the trucks pull into the driveway. On the other hand, chances are the zoning board isn’t going to be wild about your hauling in a drill rig. Give them an impassioned speech about the need to ensure America’s energy independence and lead them in a round of “Drill, baby, drill.” Granted, this is likelier to go over big in Alaska than Connecticut, so conclude by hinting that as a wealthy oilman you can help their kids get into Yale.

How do you go about drilling? Don’t figure you’re going to do this on your own. Even Edwin Drake, who in 1859 put down the first successful U.S. oil well, near Titusville, Pa., had to hire a driller, and Drake went just 70 feet deep. You might get lucky and strike oil within 1,000 feet, but average well depth nowadays is on the order of a mile. Drilling costs can run to more than $200 per linear foot, so you’re looking at an outlay of possibly a million bucks up front.

What happens if you strike oil? You’ll need some steel well casing, a main oil pump (e.g. the familiar “nodding donkey” type), various other pumps and piping, electrical lines, an on-site storage tank, and possibly a spill-protection berm and liner, all of which is going to add considerable clutter to the landscape. Tell your whiny neighbors it beats a lawn gnome.

What are the chances of a dry hole? In your case, excellent. You may have noticed that none of those whiny neighbors are currently operating productive oil wells. According to the Department of Energy, Connecticut has no significant reserves of fossil fuels. The nearest state with appreciable oil production is New York, which pumps a piddling thousand barrels a day. Unless you know something the DOE doesn’t, you can drill till Gabriel’s trumpet sounds and you won’t find squat.

This won’t be much comfort, but finding oil is getting tougher for everybody these days. U.S. oil production, though still formidable at 5 million barrels a day, famously peaked in 1970 and has been heading south since. Nobody’s quite sure how soon world oil production will peak; some say it has already.

To get an idea of the shape of things to come, my assistant Una graphed the historical dry hole rate for exploratory oil and gas drilling in the U.S. For decades the percentage of dry holes dropped fairly steadily as exploration techniques got more scientific. Things changed in 2007. Since then the dry hole rate has risen nine percentage points, which may not seem like much. But it’s the sharpest increase in more than 60 years.