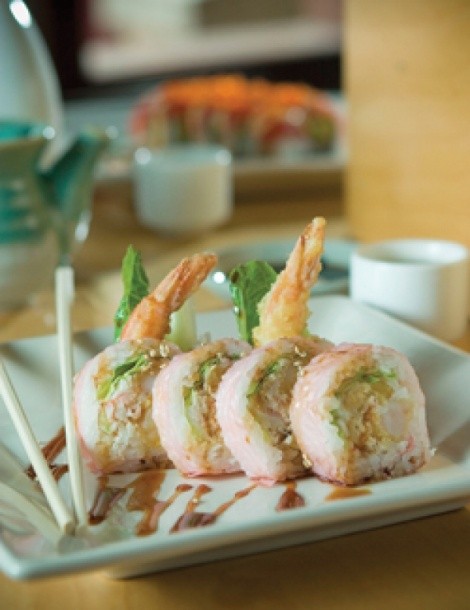 Like most sushi enthusiasts, I tend to be both very discriminating and a total pushover. On the one hand, I haven’t found much sushi that I didn’t like—especially if someone else is buying. I’ve lunched on conveyor-belt sushi in restaurants where you grab a roll as it drifts by in front of you on a belt or a floating boat and, in a pinch, I’ll even eat the prepackaged sushi you find in supermarkets. But then I’ve also supped in prime sushi havens like Nobu, Hatsuhana, Tomoe and Urusawa, not to mention Takashi right here in Salt Lake City. And when I’m forking out my own dough for sushi—which tends to be ridiculously pricey in the main—I lean toward sushi makers who are true artists. Again, Takashi Gibo certainly fits the bill.

Park City sports an unusual abundance of sushi restaurants, and my two favorite Park City sushi artists have worked in most of them. I’m talking about Eddie (of Oishi Sushi Bar & Grill) and Mikey (who holds court at Sushi Maru). You know you’re good when you’ve come to be known by a single name, like Elvis, Cher or Madonna.

As I suggested, what separates these sushi chefs from the run-of-the-mill are that they truly are artists. Sushi, at its best, is an art form: Great sushi literally looks like edible works of art. So a sushi artist not only must have great chops, a daunting knowledge of all things sushi and sashimi, fantastic hands and the freshest ingredients to be found, but he or she must also have the eye and creative soul of an artist. After all, why else would we pay $15 for an ounce of rice, a sliver of raw fish and a smear of wasabi?

You’ll find it on the menu at most Park City and some Salt Lake City sushi restaurants, but the Play-Boy roll ($14.99) was invented by Oishi’s Eddie Nam during his stint at Park City’s Mikado Restaurant. So, naturally, that’s a good place to begin the evening at Oishi. It’s a maki sushi roll that even beginners love: tender tempura-fried shrimp and avocado, covered with fresh tuna and kissed with spicy mayo, eel sauce and crunchy tobiko (flying-fish eggs). For a similar roll but with a true artist’s flourish, try the Pokiman roll ($11.99), which is shrimp tempura and crab with lettuce, all wrapped up in pink soy paper!

While it’s natural to gravitate quickly to sushi, sashimi and entrees like miso-glazed sea bass, don’t overlook the appetizers and salads at Oishi. It would be hard to improve on the simple, delicious and plentiful tuna tartare ($11.99). It’s a generous mound of diced sushi-grade tuna mixed with sesame oil, sliced avocado and tobiko—plenty to share with your favorite tuna lover.

Better yet, just put yourself in the good hands of Eddie, and he’ll feed you well, as he did me. I’d probably not have ordered hotategai nigiri ($6.50) but for his recommendation, and it was a great choice. It was melt-on-the-tongue, nearly translucent slices of fresh scallop—about as simple and clean an example of sushi that you’ll ever find. After all, the word oishi means delicious. Tai (red snapper), hirame (halibut) and uni (sea urchin) were also unbeatable, accompanied by a zippy New Zealand Sauvignon Blanc.

Like Eddie, sushi master Mikey has developed a following of loyal customers over the years, who now know to find him at Sushi Maru, his own restaurant in Holiday Village. Ably assisted by a team of pros like Alex Hamory (formerly of Bouchon), Mikey Aguilar-Okumura runs Park City’s most traditional Japanese restaurant, complete with a tatami room that seats 20.

Working with fresh seafood from the West Coast and Japan, Mikey features most of the standard sushi and sashimi selections and combos, plus a few items you don’t always see on menus, like ama ebi (sweet prawn), kani (blue crab) and the unusual Surf & Turf roll ($11): panko-fried steak and lobster with scallions and a trio of sauces to sample. Normally, I don’t indulge in super-spicy sushi, since I like to be able to taste the ingredients. However, I always make room for Mikey’s Death roll ($12.50), which I just can’t seem to resist. It’s a maki roll of soft-shell crab, kaiwari daikon sprouts, incendiary Thai chili peppers and “spicy Asian death paste.” Needless to say, you should do the Death roll after you’ve had your fill of more subtle selections, since you won’t be able to taste anything afterward.

Whereas most Park City sushi joints tend to lean toward fusion-style entrees, Sushi Maru has a good selection of more traditional Japanese dishes such as their outstanding sukiyaki: a hot pot full of home-style broth, seasonal vegetables, tofu, clear yam noodles, and a choice of chicken, beefsteak, shrimp or seafood. Also very common in Japan but not so common in American sushi restaurants is katsudon, usually made with pork or chicken; think Japanese Wiener schnitzel. At Sushi Maru, boneless chicken-breast cutlets are crusted with Japanese panko breadcrumbs, sautéed and served with egg and diced yellow onion, then topped with Mikey’s own tangy and sweet house broth and served over rice ($15). This is a splendid choice for kids who might not be ready to love sushi—as well as for those like me, who already do.

FoodMatters
Speaking of raw fish, here are a couple of classic lines delivered by customers this summer at the Blue Claw Seafood Market on Long Beach Island, N.J., where I shop when I’m vacationing back East: “How many clams are in three dozen?” And my favorite: “It smells fishy in here!” Not to be outdone back here at home, a numbskull working at my local Albertsons deli counter posed the following question after I requested a third of a pound of cheddar cheese: “Is that, like, .3 or something like that?”

• I was already impressed by the high quality and fine flavor of the cheeses I’ve tasted from Utah’s own Beehive Cheese Company, located in South Weber. Apparently, I’m not alone. The judges at this year’s American Cheese Society Competition in Burlington, Vt., were also impressed by Beehive Cheese. Our local cheesemakers beat out many others from all over North America—there were 1,200 entries this year—to win first place in the flavored-cheddar category for their unique and cleverly named Barely Buzzed. A labor-intense cheese made in 16-pound wheels, Barely Buzzed is hand-rubbed daily with a blend of coffee and lavender buds before aging. To check out the Beehive’s cheeses, go to BeehiveCheese.com.

• Got Spam? In conjunction with Monty Python’s Spamalot playing at the Capitol Theatre, Bambara restaurant in the Hotel Monaco is featuring a Python-inspired menu from Sept. 4-16. Dishes include not Spam but items like “Knights Who Say Niçoise,” “Killer Rabbit Fricassee,” “Bring Out Your Bread,” and “Huge … Tracts of … Lamb.” Bambara is located at 202 S. Main, and its phone is 363-5454.

• Quote of the week: In Mexico we have a word for sushi: “bait.” —José Simons

Send Food Matters information to teds@xmission.com. Hear Ted over the airwaves on Sound Bites, Thursdays on KSL NewsRadio 1160 AM and 102.7 FM.
cw