The Neon Demon showcases its director's superficial talents, for better or worse. 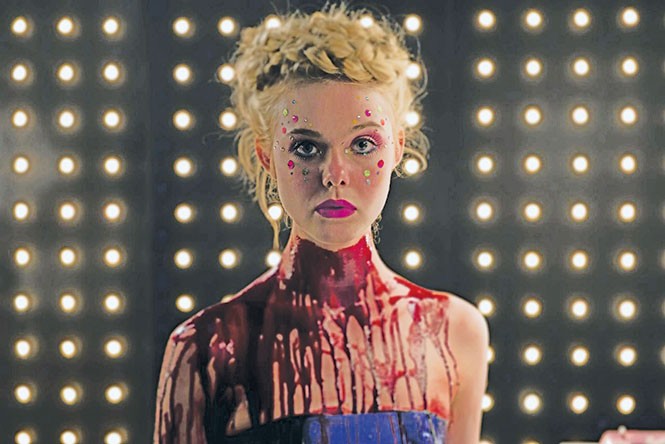 Nicolas Winding Refn is—how shall one put this delicately—not a subtle filmmaker. For 20 years, the Danish-born director has made movies bursting with graphic violence and violent graphics, often as emotionally vacant as they are dazzling. Just when it seemed like he might break through to the mainstream with the Ryan Gosling-starring Drive, he veered into the blood-and-karaoke jubilee Only God Forgives. When the opening credits for The Neon Demon feature his monogram at the bottom, it feels less like an act of ego than an act of redundancy. Because, I mean, who else?

The limit of your tolerance for The Neon Demon might come down to whether you can groove to style for style's own sake. Whatever notions Refn might be flirting with about female beauty ain't exactly ground-breaking, but that doesn't mean there's nothing there. It's just that the something that is there is entirely superficial—and maybe that's OK.

Refn's narrative—co-scripted with Mary Laws and Polly Stenham—revolves around Jesse (Elle Fanning), a 16-year-old would-be model freshly arrived in Los Angeles. Despite her youth and inexperience, she immediately grabs the attention of people within the industry, from makeup artist Ruby (Jena Malone) to an agency boss (Christina Hendricks) to a top fashion designer (Alessandro Nivola). And that instant success becomes an immediate threat to some of Jesse's fellow models, like Sarah (Abbey Lee) and Gigi (Bella Heathcote).

There's an inherent challenge built into a story about someone who's supposed to have an instantly recognizable talent: The main character better have an "it" that's as instantly recognizable to us as it is to everyone in the movie. Fortunately, Refn has Fanning, who has had that "it" since she was in grade school. Her performance is another master class in watchfulness, as the fresh-faced small-town girl reacts to the persistent gaze—whether lascivious or envious—of everyone around her. At one point, Jesse undergoes a transformation partly achieved through makeup and costume, but which rests on a sudden shift in her confidence. That transformation in facial expression and body language is so complete that, for a moment, I thought I was seeing a different actor. And that's an "it" you can't teach.

Fanning provides a solid anchor point for a milieu that feels like Refn's wheelhouse: Fascinating surfaces that may have nothing going on beneath them. It does feel that he's at least trying to poke beneath the skin of that world, including the desperate insecurity driving models like Abbey Lee's Sarah; Lee gets a great moment during a joint audition with Jesse, her face crashing with the realization that she's not the alpha female in the room. But no matter how many times Refn introduces literal predators—a mountain lion invading Jesse's motel room, or various taxidermied critters—into a tale of metaphorical predation, it never feels as though he's offering anything more insightful than "the world of modeling is callous and shallow" bulletins from the Department of No Shit, Sherlock.

At that point, it all comes down to whether Refn's gleeful garishness proves engrossing or off-putting. There's a precision to his use of color that's often breathtaking, whether it's the red strobe-light bursts illuminating Elle's face, or a lecherous photographer slathering her in gold body paint against a white background, or the jagged blue lines on a bathroom wall. But it's also harder to embrace those moments when Refn seems so determined to play the provocateur. There's nothing visually arresting about a scene in which a man forces a knife into Elle's mouth, or the sequence in which Ruby—who moonlights applying her makeup skills to corpses for funerals—engages in the activity that gives The Neon Demon's MPAA rating its "aberrant sexuality" designation. As distinctive as Refn's vision may be at crafting cinematic images, it's not always easy to give him the benefit of the doubt.

By the time The Neon Demon rolls into its gruesome home stretch, it has become clear that Refn isn't about to do anything half-way. At a time when so many movies mostly consist of pointing a camera at people talking, perhaps we shouldn't under-value that kind of commitment to unforgettable images. And when those images are an excuse for self-indulgence, perhaps we shouldn't over-value it, either.