With an inept drug czar and vindictive DOJ, citizens are left to address opioid crisis on their own. 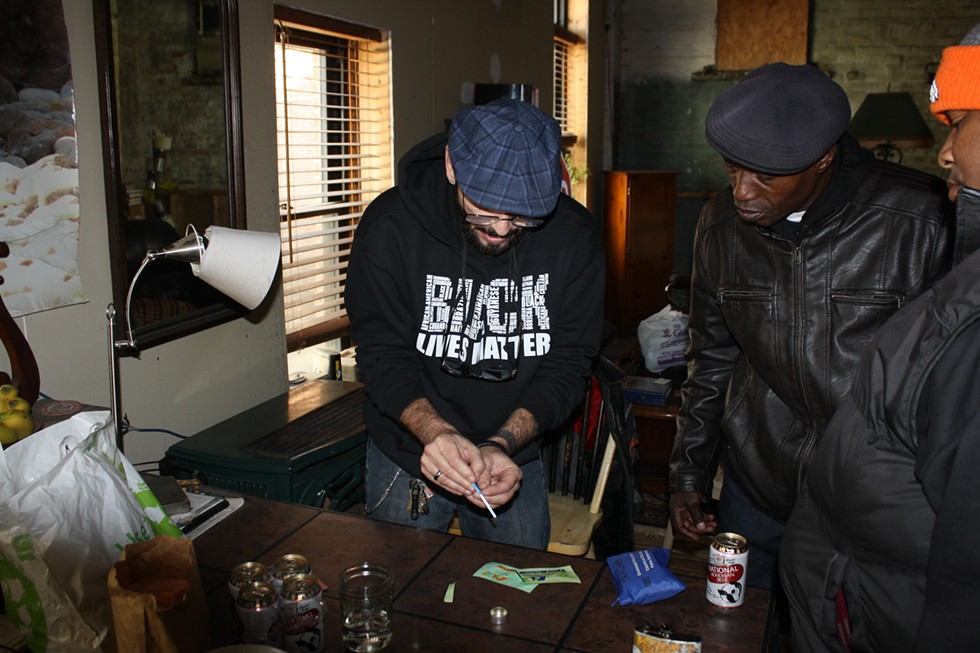 Although many in Utah were aware of the trend, last October, President Donald Trump declared the opioid crisis a public health emergency, saying that more than 64,000 Americans had died from opioid overdoses the previous year. Fentanyl is responsible for a large part of that number. But aside from his attorney general's attempts to ramp back up a tough-on-crime drug war that will re-criminalize weed, the administration hasn't done much.

Trump hired a 24-year-old MAGA frat boy as drug czar. Taylor Weyeneth, the recent college graduate who has never really worked anywhere except the Trump campaign, recently resigned amid questions about his résumé.

Meanwhile, local jurisdictions are passing "drug-induced homicide" laws in order to incarcerate more people for longer periods of time for drug offenses. So, around the country, advocates of a harm-reduction approach to the drug overdose crisis are taking matters into their own hands.

That's why Tino Fuentes is in a Baltimore warehouse apartment with a bunch of drug-testing strips. Fuentes, a former heroin user and dealer from New York, might not be the most obvious advocate for drug testing.

Single-use Rapid Response drug-testing strips are supposed to be used to test people's urine for the presence of drugs, but Fuentes puts them to a different use—one that may save lives.

Instead of using the strip to monitor the activities of employees or parolees, Fuentes and others use the strips to test street drugs for fentanyl. Drug checking rather than drug testing.

"After you suck it dry, put your shot to the side, add water to the cooker. All you're looking for is the residue," he says to a number of users or former users who are still involved in Baltimore's opiate community. "You don't have to waste the drugs at all. Just the residue."

Insite, a safe-injection facility in Vancouver, first developed the technique of using drug testing strips to test for fentanyl. "It was just trying to find a solution because there are other drug checking methods that are used—primarily in night-life and festival communities—but the kind of tests used in that community are not sensitive enough to pick up fentanyl, which is really active in small doses,"Stefanie Jones of the Drug Policy Alliance (DPA) says. "That's why using those test strips came about. It was a process of trial and error of how to get it to work most effectively."

A recent study in Vancouver showed that 86 percent of the drugs and 90 percent of the heroin they checked had fentanyl in it. Users who knew fentanyl was in their dope changed their behavior—they were more than 10 times likelier to reduce their dose.

Washington, D.C.'s City Council has adopted emergency legislation that would allow organizations to distribute the strips and allow individuals to use them without fear of legal consequences.

But it's technically illegal for Fuentes to check the drugs in Baltimore—when he is testing he is legally in possession of the drugs; in some places the strips themselves are considered paraphernalia—but the weathered and grizzled old New York Puerto Rican with the leather jacket, the flat old-man golf hat, and a pair of glasses perched on his nose like Ben Franklin doesn't give a fuck. That's why, though he consults with some cities, he doesn't operate as a 501(c)(3) or any other legal entity.

Sometimes, ethics—saving lives—is more important than the law. But there are places that recognize the need for these harm-reduction strategies.

"I'm not going to sit back and wait for the law to change or the government to help, because they ain't never helped me and the law ain't either," he says to the group. "That's why I do what I do."

"We take it and dip it in there for 15 seconds, right," he says to a group of five harm-reduction advocates from the community as he dips the strip into a small tin votive candle holder that some people use to cook their opiates. "Then you put it up like that, as you see it start getting pink, that's sucking up the water."

In a few seconds, lines start to stand out on the strip. If there's one line, then your dope has fentanyl in it. And if there are two lines, it probably doesn't. The test only covers 12 fentanyl analogues, including the even stronger carfentanil—but new varieties are developed nearly every day. And the tests can't check the strength of a drug, only its presence. So even if it tests positive, it may not kill you.

It's more difficult to mix fentanyl in the black tar heroin that comes up from Mexico, but in many places, heroin is powder and almost all of it has fentanyl. Some of what is sold as heroin is nothing but fentanyl.

"When I went to Ohio, I didn't find anything, anything at all with heroin in it. Everything I bought was fentanyl," Fuentes says.

And it's not only heroin. Fuentes has found fentanyl in cocaine, crystal meth, and even Xanax.

"Always test every batch," Fuentes says. "Don't assume because [of] the last batch." He calls it the "chocolate chip" effect when the drugs aren't cut well and the fentanyl is not well distributed.

William Miller started using heroin in the 1960s and he has seen it all. But he hasn't seen anything like fentanyl. He can't even begin to count the number of people he's known who have died because of the drug. As a result, he's gotten clean and is now working in his Baltimore community to spread the word.

"Doing it like this, it spreads out among communities," Fuentes says. "I'll leave some strips, do what you do on your own. Figure it out, go into your neighborhoods or wherever you think it's deemed necessary and see how it works for you."

"No matter how you feel about people that use, people are gonna get high and this fentanyl thing, man, it is killing people," Miller says.