Not all are happy with Salt Lake City's new junk cleanup program. 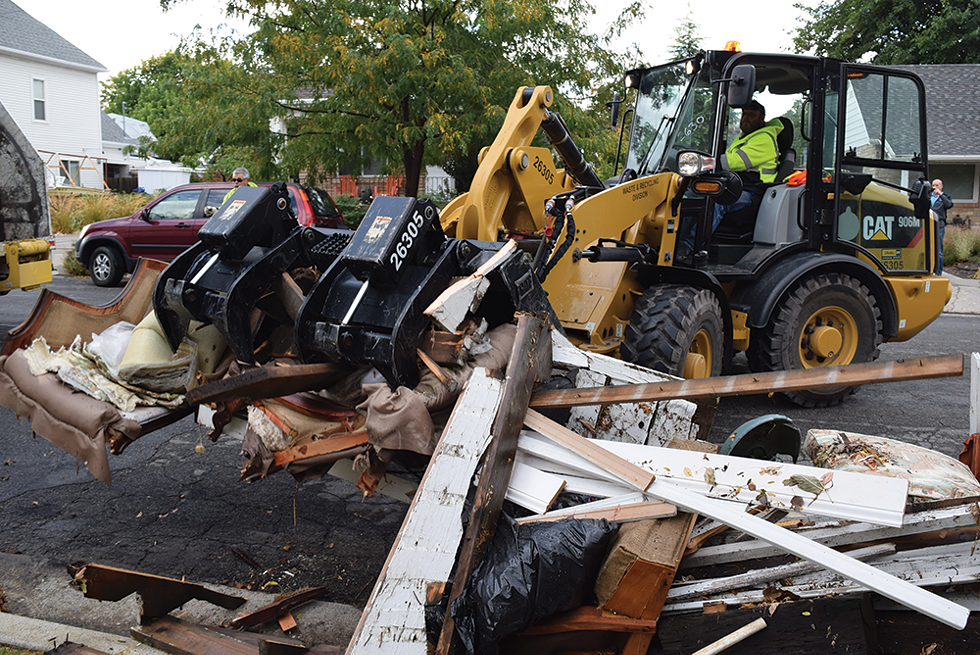 Two broken doors, rotten wood, an old projection TV and other debris litter the street outside 71-year-old Farrina Coulam's house in her East Liberty Park neighborhood. Meanwhile, a front-end loader grabs the material and puts it in a nearby truck.

"You guys are wonderful," Coulam says to the city employees as she stands on her front porch. "Thank you so much. My garage is now clean."

The trash outside houses like Coulam's is a common sight—in the spring. For 30 years, Salt Lake City operated a neighborhood cleanup wherein residents could place old furniture, yard waste and other junk on the street. It was designed to save residents a trip, or multiple trips, to the dump. This year, the program changed. Today, residents like Coulam must call in, schedule a pickup date and list what material they'll put outside, altering the whole "spring cleanup" idea.

Proponents of the new "Call 2 Haul" method tout its year-round availability and its role in reducing illegal dumping and stormwater contamination. But the rollout hasn't come without its glitches—and its critics.

When the program launched this summer, residents sought appointments in droves. Some were told they'd have to wait as long as three months before the pickup. Lance Allen, the city's waste and recycling director, says personnel were fielding more than 100 calls per day in June and July, which created a backlog. District 6 Councilman Charlie Luke soon received dozens of complaints from unsatisfied constituents.

"I was not a fan of the direction from the beginning," Luke says. "This is one of the more popular and successful programs the city offers and I, frankly, didn't understand or believe that we needed to change it."

In July and August, Luke's eastside district amassed 342 collection appointments, the second-highest in the city, according to data presented to the council last month. District 1, which encompasses northwest Salt Lake City, had 381.

The councilman says he heard complaints about restrictions on which items the city would pick up, as well as residents having a hard time contacting someone to schedule a date.

"It may not look like it does today or the year after, but I think for the most part, it's meeting the needs of the majority of the residents ..." —Lance Allen tweet this

Under the new rules, residents must list all materials they plan to discard. There's a good reason, Allen says. Certain items, like a TV or a mattress, require a special vehicle. The city no longer uses one truck for everything. Allen says the changes are designed to increase the amount of waste they can recycle.

"No. 1, we want to make sure the material you're putting out is compliant ... [that] you're not putting out hazardous material or unacceptable material," Allen says. "And No. 2, we want to try to divert as much of that material through recycling—we're recycling tires, mattresses, we're doing a lot of the appliances and metal-type stuff—that we would schedule with a different truck so it can be recycled."

Standing near another pile down the street from Coulam's house, Allen and the drivers notice a metal ladder, which they didn't know would be in that particular heap. Instead of putting it in the truck, they call for another vehicle specifically designated to accept metal.

"Construction material," as Allen describes it, is another prohibited item. This encompasses items such as drywall and wood used for building. They also ask that small items be placed in some sort of container like a box or a bag to help prevent the trash from ending up in the city's drainage system. If the rules are violated, the city will try to contact the resident and leave a note describing the non-compliance issues and the next steps to prevent future incidents.

Allen also says call volume has dropped and they are now able to schedule people more frequently. The department averaged about 30 requests daily in September and is currently getting about 15 to 20. The department is staffed to handle up to 70 pickups per day. Allen says there were no complaints from the Environmental Protection Agency regarding stormwater contamination from the program, but the changes are meant to be proactive and eliminate that possibility.

Previously, residents sometimes would put a mattress outside and then place yard waste on top of it. That waste could end up in storm drains and, later, the Jordan River. Additionally, Allen says, the mattress recycler wouldn't accept the mattress because it was "contaminated."

Along with the city's stormwater monitoring program, the state's Department of Environmental Quality monitors levels of oxygen, among other details, in the Jordan River. Jeanne Riley, the Division of Water Quality's stormwater section manager, says the department "doesn't know" of any connection between stormwater contamination and the city's cleanup program, but contamination is "definitely an issue we're concerned with."

"I could see if you're doing the Call 2 Haul program and you're getting pickups faster, there's less material in the streets," Riley says. "We do see during storms that oxygen levels are affected in the Jordan River, but we're still trying to better understand the dynamics of how that impact occurs."

Organic matter such as grass clippings can end up in the Jordan River, settle in the riverbed, break down over time and deplete the water's oxygen levels, according to the division. That's something the city hopes to avoid.

Residents like Coulam, though, are happy with the service, despite a mixup regarding her TV. City employees say they weren't expecting a TV and couldn't take it in their vehicle. So, they had to arrange for another truck to collect it. But Coulam says she told the office ahead of time.

"I listed that TV and I had a discussion with someone on the phone. She was very nice, but I said, 'This is one of those old projection TVs,' and she said, 'That's fine, we'll take it,'" Coulam recalls. "I have the list that I sent and they approved it. The TV was on the list. I don't know why those men didn't know that."

Coulam says she was very happy with the rest of the service. When she called, she received an appointment two days later. But she had to reschedule. "I'm an old woman and it takes me time to round up the family," she says, and the process to arrange a new date wasn't difficult.

"Under the old system, it would be too early in the spring or too late in the fall, but being able to schedule it is perfect," she beams.

Allen and others in the Waste & Recycling Division cite a chance to cut down on illegal dumping—people leaving trash on other properties—as another pro. Whether Call 2 Haul cuts down on that problem, though, might not be known until next year. In July and August, the city recorded 159 illegal-dumping complaints, according to the numbers most recently available. That number was down from 245 during the same months in 2017. Allen says his agency is still fine tuning the system, but he's happy with the progress after three months.

"It may not look like it does today or the year after, but I think for the most part, it's meeting the needs of the majority of the residents and it's addressing the main two issues we had with the environmental-impact and the illegal-dumping aspect," he says.

Luke, however, isn't so sure. "I don't know many people who are going to be cleaning their garage when there's snow on the ground."